Why I Won’t Jump Back Into the EURUSD Bear Trend

See how retail traders are positioning in EUR/USD along with global indices as trade wars and Italy's risk re-balance shift gears using the DailyFX speculative positioning data on the sentiment page.

The Original Motivation for My EURUSD Short

At the beginning of May, the world's most liquid currency pair transitioned from congestion to a productive bear trend. The slide that resulted was still intact to end this past week, but the move is not convincing enough to draw me back in. I took a EUR/USD short approximately a month ago when my minimum threshold for a mix of technical, fundamental and conditional qualification was met. The clearance of support established between the floor of a three-month range and the 50 percent Fib the 2014 to 2017 bear trend around 1.2150 was the first indication of potential. The fundamental backdrop never really gained serious traction beyond a questionable suggestion that previously-ignored interest rate differentials were once again eliciting the textbook influence. Alone, those two factors would not have been enough to inspire a trade. However, the addition of a record net long speculative futures position behind the Euro added enough fuel to make a mild spark productive. 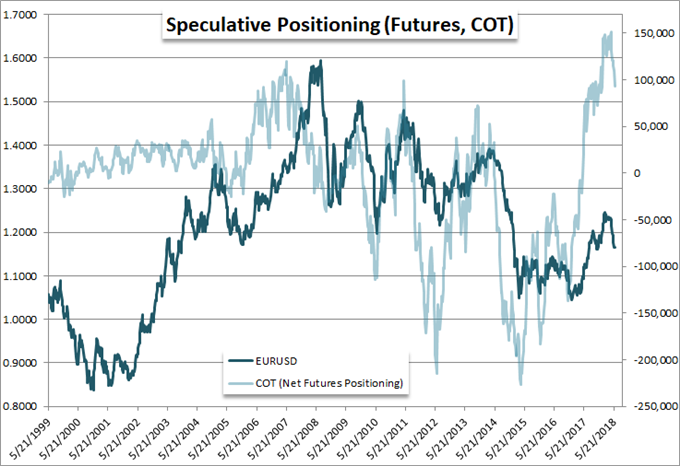 Fundamentals Shift from Non-Factor to Burden

Typically, I consider the themes and event risk that comprise fundamentals the source of conviction that more reliably sustains a trend. Yet, so long as it doesn't conflict with a position supported by the other two analysis technicals I consider legs of the trinity; I will purse the opportunity. Yet, therein lies the problem for the EUR/USD after this past week. Fundamentals started to represent a genuine threat to the measured progress the pair could slowly accumulate. From the Euro's backdrop, the resolution of short-term pressure in Italian politics put concern over a Eurozone member threatening its exit further into the future. An improvement in EZ inflation and employment data worked in concert with some ECB members remarks that the bank would signal its definitive transition towards normalizing policy at its next meeting.

Where the Euro's outlook added a little headwind to a EUR/USD slide, the troubles for the Dollar registered as far more prolific - if complicated in the short-term. The NFPs and other May labor statistics Friday were genuinely encouraging, but how much additional leverage can this data earn for an already-unique monetary policy bearing from the Fed. In the meantime, headlines this past week reasserted the focus on trade wars. An argument can be made that a unilateral move by the US to impose tariffs on a trade partner can infer some benefit for the Greenback as it shifts the balance of incoming capital. That said, this will not be a one-sided engagement. Leaders from the European Union, Canada and Mexico have already announced retaliatory prepartions. These may not amount to enough to unseat the US economy, but the are a considerable risk that can threaten a passive trend.

EURUSD Isn't Off Limits, But It Should Warrant the Proper Approach

We may very well find the EUR/USD make a bid for - or even overtake - 1.1500 next week, but that won't absolve the market of its troubles. The Euro will carry with it a certain sense that it is trading at a discount after its six-week tumble and the risk that the G7 collaborates with its own tariff response on the US can quickly undermine the benchmark currency's attempt to run. If you have deep convictions for how both sides will play out over time, seeking out a long-term trend is viable. Conversely, event-driven volatility and key technical levels can serve as the basis for short-term trades. However, medium-term swings and passive trends carry far too much risk for the scaled reward we can reasonable expect from this pair. We discuss the risks and merits of the EUR/USD in this weekend Quick Take Video. 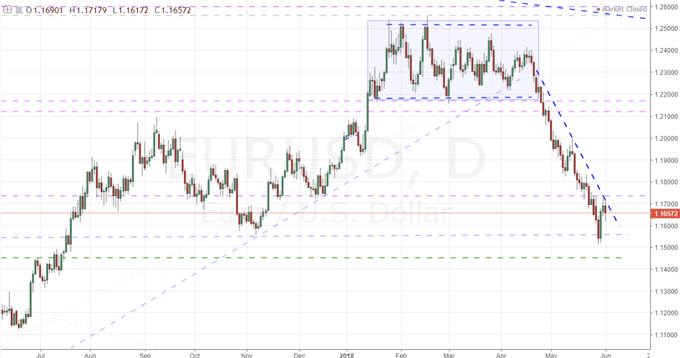