The Dollar has dug its heels in these past few weeks. In fact, the DXY Index has posted its strongest two-week rally since November 2016 - intensity that was necessary to clear the three months of onerous range. It is this turn of fate from a restrictive congestion to the rise of a nascent trend that defines the potential of a key event risk for this week: the FOMC (Federal Open Market Committee) rate decision. The US central bank is due to announce its decision on monetary policy after its two-day meeting at 18:00 GMT. This is one of the 'standard' meetings for which there is no updated forecasts nor the press conference from Chairman Jerome Powell. That said, momentum for the Dollar will make the market increasingly sensitive to nuance in the event. The probability of a rate hike at this meeting - following the March hike - is an extremely tepid 5 percent. However, the debate over whether the Fed will hike three or four times in 2018 is proving fluid; and there is no other major central band that is even confident that it will be able to hike in the near future. The stage is set. 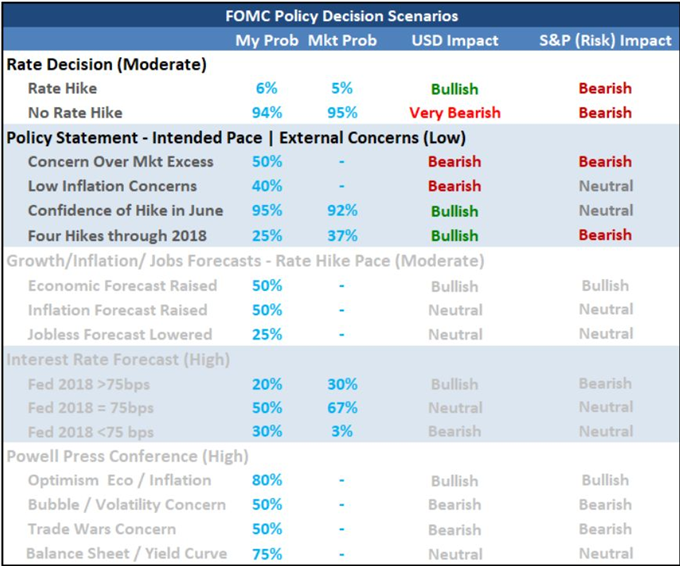 Context Puts the Fed in a Unique Position

In a vacuum whereby there are no peers to the Fed to consider, there would not exist a Dollar rally. That said, in the absence of that environment, the currency also wouldn't have tumbled through 2017. The collective recovery of the Greenback's most liquid counterparts was the unexpected point of weakness for for the single currency, so it is only fitting that their cummulative retreat can lead to a meaningful recovery. That retreat for the Euro, Yen and Pound took root in earnest over the past two weeks. For the Sterling, the retreat was triggered by recognition of the Brexit problems that have compounded recently alongside the rapid retreat in BoE rate foreasts - dropping from near certainty of a hike by June to less than a 30 percent probability. The concerns surrounding the ECB and BoJ are more important. Though neither has actually raised the prospect of normalizing from their extreme easing efforts, there had been a steady build up in speculation hopeful for very early capital gains. Yet, after the BoJ abandoned its expected time frame for reaching its inflation goal and the European bank walking back its explicit time frames for ending QE or chasing hikes, the implications for a rally like the one earned by the Euro over the past year is considerable premium to work off. 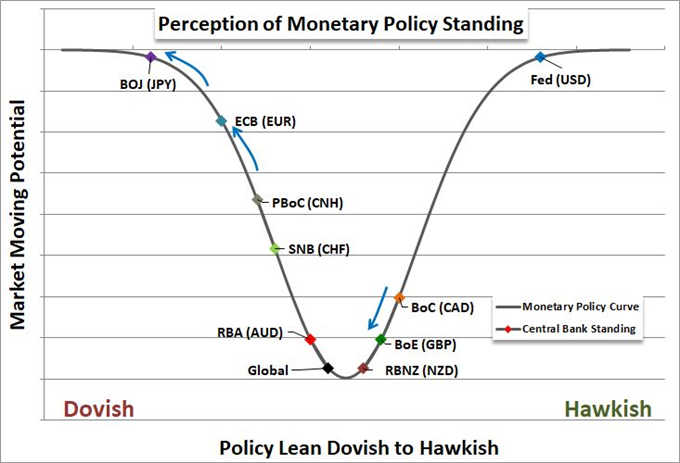 What to Watch for From the Fed and Dollar

With the Dollar already engaged in a strong recovery, it is highly likely that the market will be responsive to the rate decision should there by anything of substance to take away from the event. Furthermore, it will likely play out with a bias: a stronger reaction to a bullish outcome while the bearish would only slow the ascent - unless it is a full commitment to abandon the lift altogether. To register a hawkish or dovish shift, we need to look at the language in the accompanying statement. If there is a reference to optimism whereby the outlook for four total quarter percent hikes looks to be the most likely outcome, the Dollar can accelerate in its recovery. Fed Funds futures price this as the most likely outcome though swaps still favor only three. Given how early into the rebound - and how deep its discount - the Dollar is, the skew in sensitivity will be remarkable. 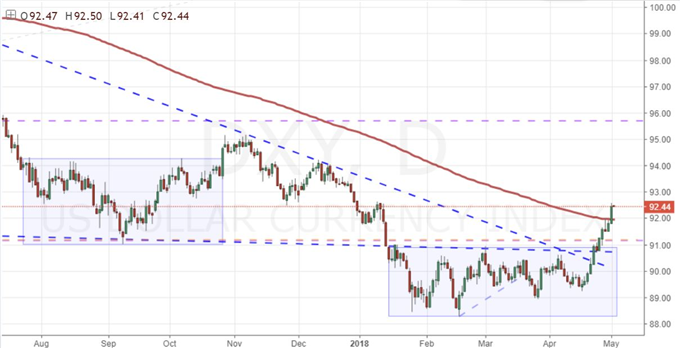 First and foremost, we should consider where the Dollar offers the best short candidate. That is because it is the least expected outcome and contradicts the general performance we have seen out of the currency as of late. There are few truly leveraged options for a bearish/dovish outcome, but the USD/CHF has claimed significant ground over the span of months. Personally, I think the intensity of the NZD/USD's rally these past weeks makes it acutely primed for disappointment. History shows that the current downdraft for the pair is the most intense since the beginning of 2016 and similar moves of this direct and intensity resulted in eventual reversals. That said, an outcome that throws gasoline onto the bullish fire has plenty of options. My interest is always to play overt strength against overt weakness. If the USD continues to recover from a deep decline, the particularly oversold nature of the Euro and Pound make for some of the best counterparts - not to mention the EUR/USD and GBP/USD technical pictures are appealing. We concentrate on the leveraged potential for the Dollar leading into the important FOMC rate decision in today's Quick Take Strategy Video.