Trading Strategy for a Dollar Buffeted by Politics, FOMC and Risk

Prepare for the FOMC rate decision and learn the Dollar as well as capital market impact as it happens during the live webinar coverage. Sign up for the event on the DailyFX Webinar page and join me 15 minutes before the release

The Dollar's Bearings Going In

We are heading into a fundamental maelstrom for the US Dollar. Three of the most effective fundamental themes to buffet both the benchmark currency and broader capital markets over the years look poised to fire all at the same time over the coming 24 hours. Against this troubling market weather pattern, we have to assess the standing of the Greenback. On the back of a year-long tumble, both the bulls and the bears have points to make. Those seeing only an extension of the tangible pain see consolidation on three-year lows and on the action side of a large head-and-shoulders neckline break. Yet, bulls can make the argument that after the substantial depreciation against otherwise favorable fundamental winds there is an ideal discount to counter from. Ultimately, conviction and intention will follow what fundamental theme demands the widest repositioning among the speculative and investing masses. 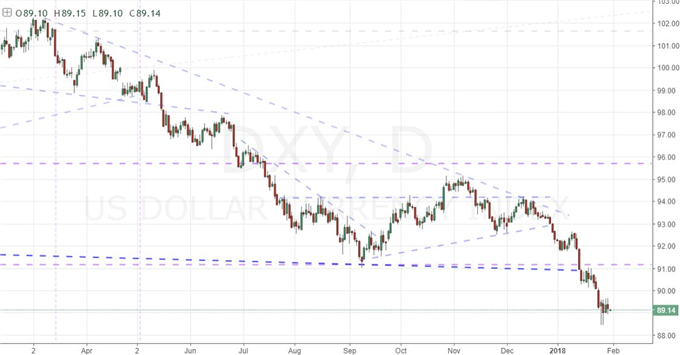 A Recent Theme of Protectionism

What makes the upcoming trading session so complicated for FX traders is the mixture of overwhelming themes that threatens to create a convoluted backdrop of speculative repositioning. Most active recently has been the influence of protectionism. The 'America First' agenda brought by the Trump administration following the announcement of specific tariffs last week caused a ripple of concern for the Dollar as a step towards disengaging the collective global growth enjoyed in global trade and the movement of capital. The overtures of trade wars that need to be acted upon and the move to take a weak stance on the consistent 'strong dollar' policy upsets the balance for global markets. In protectionism moves, there are debates as to who can benefit in the short to long-term; but for the world's largest economy and most connected member, the outcome is doubtlessly negative. How the US intends to conduct business with its trade partners - and whether its partners decide to find circumvent the dominant player - will start with the State of the Union address. 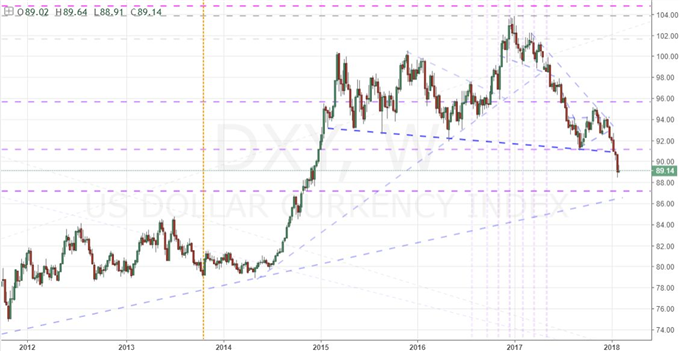 A more easily defined risk ahead will be the Federal Reserve rate decision. It is easier to establish the score in this event because of the central bank can announce a hike or no change in rates. Unfortunately, this is not seen as a meeting where the bank moves (markets see a sparse 4 percent chance), so the market's efforts will be spent interpreting intention for pace and policy reach moving forward. The central bank has been purposefully vague yet committed to gradual pacing, so impact depends on the speculative interest the market intends to heap on the event. That makes this a point of acceleration rather than catalyst. I would have said the same is true for general risk trends, but after this past session's S&P 500 and Dow plunge, we may find this sweeping fundamental influence take control. 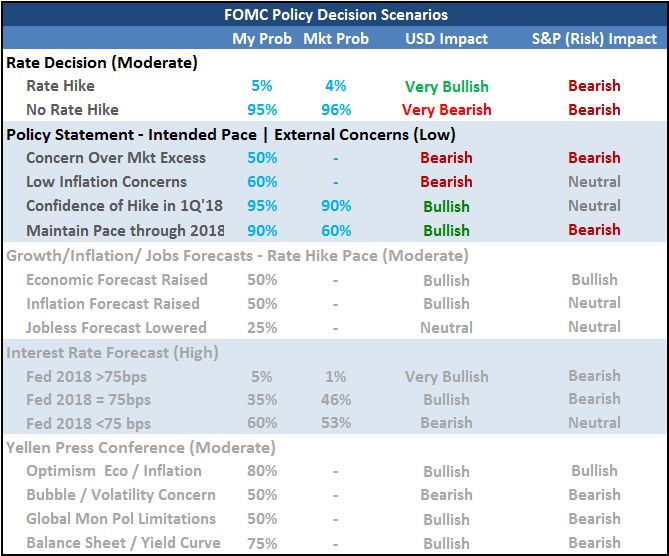 The Strategy Amid So Many Signals

It is unreasonable to assume we can chose the degree of importance for each of these general themes along with their specific outcomes to assess how to directly trade the Dollar. The reality is no doubt going to be much messier than that. There will likely be some bearish updates and some bullish from which the market will have to determine what is more important and decide trading intentions. To approach this from a fundamental theme or even lay out specific scenarios is a low probability affair. I would prefer to approach this event with a technical bias monitoring key levels on pairs like EUR/USD, GBP/USD, NZD/USD or AUD/USD and evaluate if or when the levels are broken. If a a break is made and the collective fundamental view supports the development, it will register as an opportunity. If technicals and fundamentals conflict, the likelihood of follow through is no doubt low and the event better to be avoided. We discuss the strategy for approach the Dollar amid so much competing event risk in today's Quick Take Video. 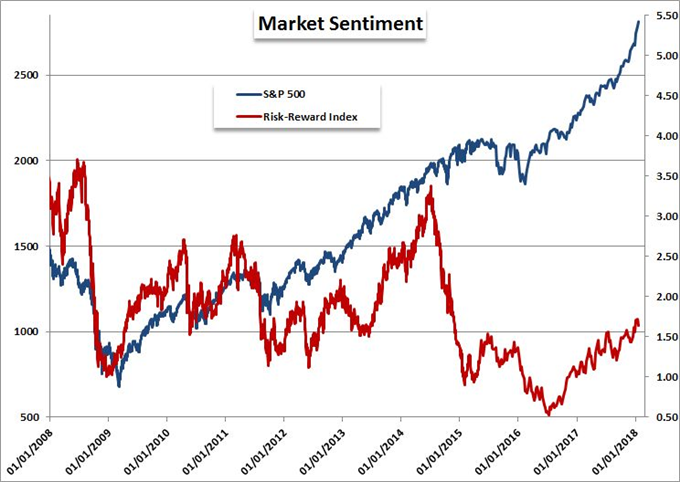