Already this week, we have seen both the Euro and Japanese Yen set in motion on separate lines of speculation that their respective central banks were readying for changes in their accommodative monetary policy programs. A change in bearing from the ECB and BoJ is particularly remarkable for the monetary policy theme because those two central banks are consider the most dovish major authorities. Not only would that hold profound implications for their respective currencies, it would collectively represent a change in in the global monetary policy spectrum whereby we definitively see years of accommodation - and all the speculative appetite that has come with it - start to recede. Yet, the trading on these abstract course changes is not particularly straightforward.

While it is reasonable to say both the Euro and Yen are still significantly discounted for the years of aggressive easing the banks pursued - particularly in these more recent years where the Fed started to draw greater contrast - there are not particularly clear milestones to yet work with. Neither group have specifically signaled clear steps towards easing. Rather most of the market response has been founded on speculation on otherwise dubious terms. Eventually, we may find better support for these views; and speculation will move well before any true confirmation. However, we have also experienced early moves on this front before with significant setbacks in momentum and trend through pairs like EUR/USD and USD/JPY. We will need to diligently monitor data and headlines to offer definitive stepping stones for conviction. In contrast, we have the Canadian Dollar's foundation established by the Bank of Canada.

The Canadian Dollar is not a disadvantaged dovish currency. After two rate hikes in 2017, it is arguably the second most hawkish major next to the Greenback. In turn, the currency has regained significant ground recently - though more abruptly with far less speculative lead time than the Euro. Yet, where there may not be as much speculative build up through monetary policy imbalance, it is more readily backed by fundamentals and thereby conviction. While that outlook may turn more hawkish or dovish (translating into bullish or bearish), it can follow more definitive steps which makes this theme significantly more tradable. In fact, the most definitive event possible for monetary policy is on the Loonie's docket for next week. The Bank of Canada rate decision is scheduled, and the consensus among economists is for a 25 basis point rate hike. Markets are pricing in an 80 percent probability of such a move. We discuss the BoC's role in the increasingly active monetary policy theme in today's Quick Take Video. 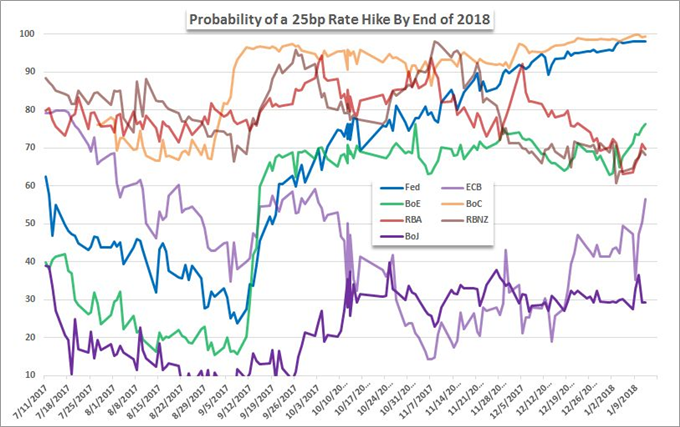 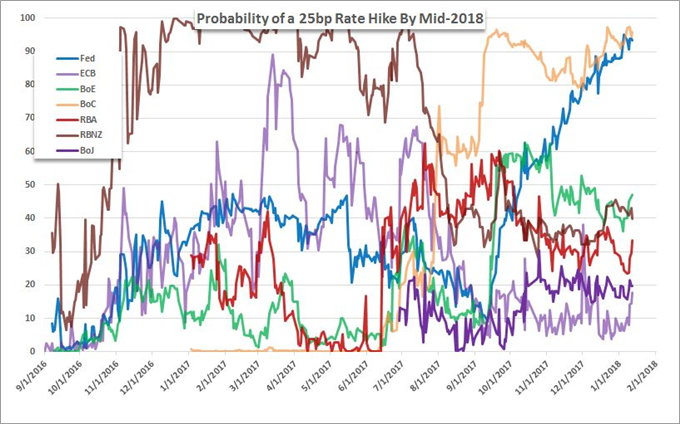 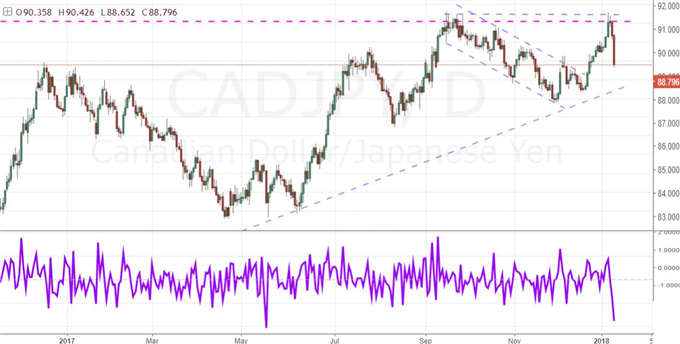