COT figures showed futures speculators further cut their net short GBPUSD position through this past Tuesday - before the Fed decision and Prime Minister's speech. How does the more timely retail FX reading align to this position on the DailyFX Sentiment page?

The Sterling was a speculatively prone position heading into Friday's trading session with an aggressive move behind it, key technicals in close proximity and heavy event painting new futures. Despite the potential, the currency closed the week without resolution. Neither bulls nor bears tool control of the currency though conditions arguably grew more tense. Perhaps this does not look particularly unique in an an environment that is defined by is persistent complacency. However, we shouldn't consider these circumstances 'normal' and in turn abandon market setups based on sound analysis and strong risk-reward evaluation. The yield to be earned capitulating is anemic. The risk associated to a market that suddenly reverts to historical norms in comparison can be enormous. With GBPUSD, I'm looking to align with larger trends of fundamentals, technicals and speculative positioning; while keeping a qualifier for conviction before placing any trades.

From a broad analysis of the Cable and through an emphasis on particular themes and views; I prefer a bearish view on the pair. That is not to mean that I believe the market has to drop; but if it were to continue higher, it would grapple with conflicting themes and momentum would struggle to secure conviction. Fundamentally, the Pound has advanced between an effort to cover the aggressive Brexit discount and the recent swing back to a hawkish policy lean from the Bank of England (BoE). That said, UK Prime Minister Theresa May's speech Friday offered little support for an amicable divorce when the fourth round of negotiations begins this coming week; and the ratings agency Moody's announced after the close that it had downgraded the country's credit rating (supposedly despite May's assurances). As for the BoE's bearings, aside from a few BoE Governor Carney speeches the coming week, we have few milestones to build upon this optimism. In contrast, the Fed clearly stated its intentions to reduce its balance sheet next month and offered an even clearer outlook for a rate hike before year's end than its UK counterpart.

In terms of technicals and positioning, conditions are less extreme but still slanted out of favor of a steady trend. Having climbed through 2017, GBPUSD marked a critical break of a strong confluence of technical resistance around 1.3450 (midpoint of the post-Brexit range, previous years' high and low point, convergence of trendlines), yet stalled immediately after overtaking the benchmark. Now, that same resistance serves as immediate support with a familiar 'head-and-shoulders' pattern completed. Individually, a broad Pound Index puts the currency below major resistance and the DXY Dollar Index has suffered an extreme tumble that can be readily argued as an oversold position. Meanwhile, positioning figures for speculative futures traders from the COT showed a sharp reduction in the net short exposure from the previous week before the downgrade, May's speech and Fed decision. I'll look for a break below 1.3450 moving forward along with a clear theme (monetary policy skew, risk trends, Brexit skepticism, etc) that can carry a trend. See more of my evaluation and reasoning for my preference in this weekend Quick Take video. 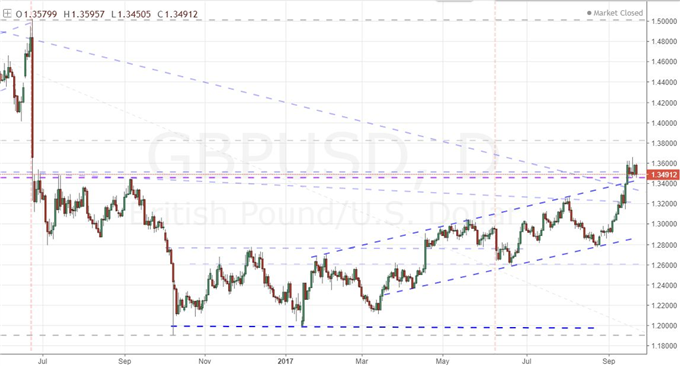 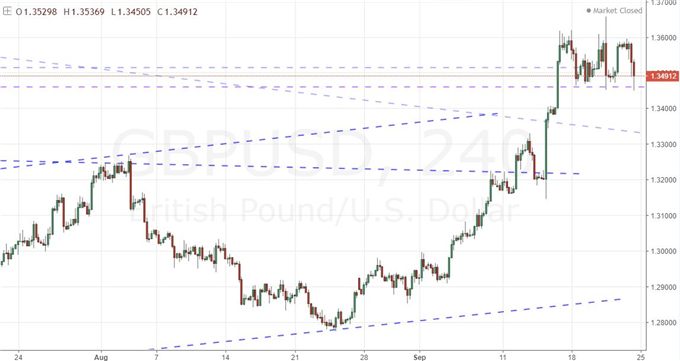 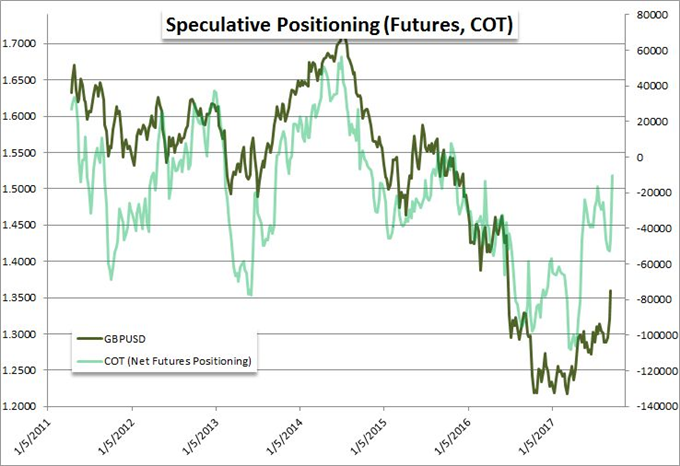