What makes for a 'good' trader? Strategy is important but there are many ways we can analyze to good trades. The most important factors are our own psychology. Download the DailyFX Building Confidence in Trading and Traits of Successful Traders guides to learn how to set your course from the beginning.

There was a significant amount of volatility behind equity markets, the benchmark EUR/USD, commodities and some of the crosses this past session. A round of scheduled and unexpected event risk combined with month-end activity to charge the markets; but that turbulence is likely to evaporate quickly heading into the final session of the week. While there is volatility at our backs and the promise of NFPs ahead, liquidity will likely prove the most important feature of the financial landscape. We are heading into the typical weekend liquidity drain in an environment that has is notorious for its structural complacency. Yet, further compounding the difficult market into which that translates, we also have the seasonal influence of the US Labor holiday. Extending a stretched speculative move like the S&P 500's three-day rally can be difficult under those conditions. Producing a long-awaited breakout or major reversal is even less likely.

One of the more stubborn trends that the market attempted to turn was EUR/USD. Though the Dollar finally found some reprieve earlier this week, it only qualified as a correction in an otherwise momentous 2017 bull trend. Perhaps attempting to take advantage of the technical slip and speculative wariness, the ECB leaked through unofficial sources to Reuters that an increasing number of its rank was growing concerned about the level of the Euro. This is the jawboning I have been awaiting and draws some comparison to the 2014 warning the bank issued which forced the 1.4000 top for EUR/USD. However, there are perhaps more points of dissimilarity between the effort now and the one made three years ago. Beyond the exchange rate holding much higher, the ECB President made the statement official, a specific level was targeted and they attached the threats to explicit monetary policy actions. There is still a chance that the central bank makes a more explicit threat along these lines should the Euro hold that high or continue further; but then we will face another hurdle - the diminished effectiveness of monetary policy with the world's major central banks having already expended so much of their firepower. Understandably, there is speculative appetite for a turn from this benchmark pair and the currencies that comprise it. And so, expectations will remain high for what the NFPs are able to accomplish Friday.

Without taking into account broader market conditions, there are serious limiting factors to the influence of the United States' monthly labor statistics. The trend of steady job additions and the drop in the jobless rate has been going on for years and squeezed considerable premium into the Dollar for its first mover yield advantage. Should the August figures prove better than expected, it may offer an economic bump, but it will struggle to offer rate speculation a lift. A significant short fall would be the greater shock to the system, but it would find a currency that has been hammered throughout 2017 and will look like a hiccup compared to the years of employment improvement. Looking more broadly at the market, the seasonal holiday liquidity drain will likely prove the most limiting factor especially in this environment of structural complacency. That same restraint will be a curb for the abrupt moves we've recently seen for the Canadian and New Zealand Dollars as well as the Pound. The CAD surged this past session after a strong 2Q GDP figure, the Kiwi tumbled on a multitude of headlines and the Sterling responded to doubt over progress at the close of the third phase of Brexit negotiations. We discuss the financial market conditions, FX developments, commodities and cryptocurrencies in today's Trading Video. 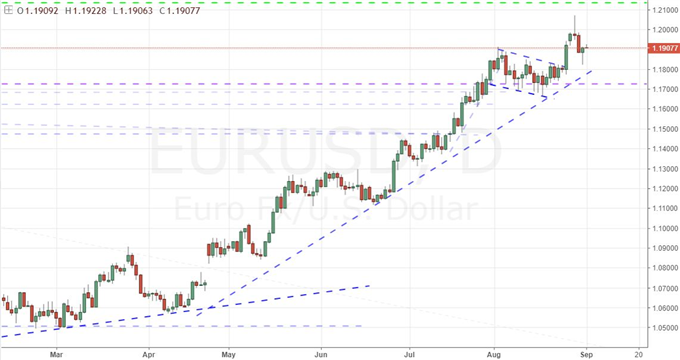 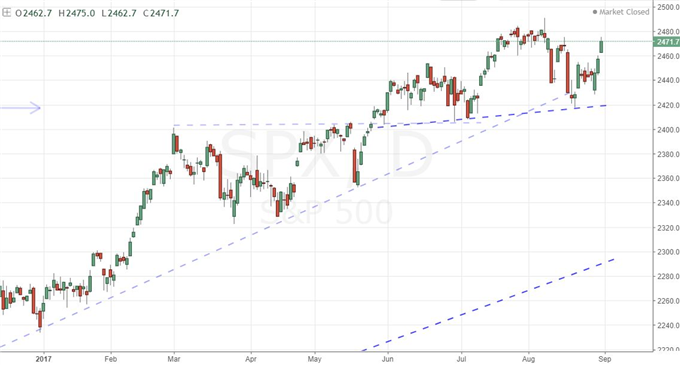 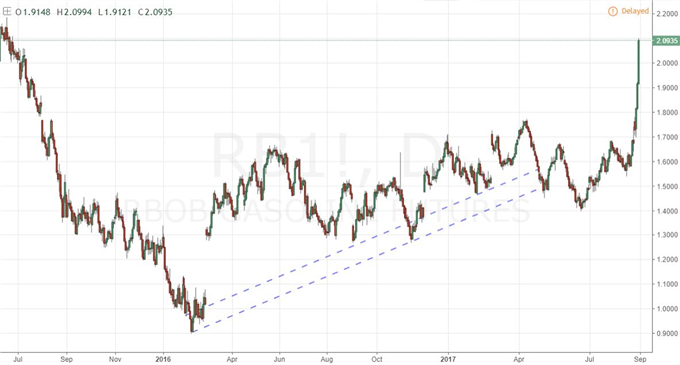