I will be covering the FOMC rate decision live starting 15 minutes before the decision is expected. Sign up to join the event on the DailyFX Webinar Calendar page.

This month’s FOMC rate decision does not carry the full suite of speculative points of contention that June's meeting did. However, that does not neutralize the volatility potential of this event should the group strike the right market nerve. The policy decision is due at 18:00 GMT and alongside the call on the benchmark rate, we are expecting the monetary policy statement. This is not one of the 'quarterly' events that further offers Fed Chairwoman Janet Yellen's press conference or the trader favorite SEP - the updated forecasts for economic trends and rates. When the Fed announced last month that it had already laid out the plan to start withdrawing from its massive stimulus program though, it leveraged the market's sensitivity to nuanced changes in view that could signal a timing on this uncharted policy course into hawkish territory.

Given the market's certainty of no change in rates - Fed Funds futures are literally pricing in 0 percent probability - traders should focus on the policy statement. It is almost inevitable that the boilerplate update will have to carry changes. The tentative plan to start winding down the stimulus program was not in consideration at previous meetings, so its mention will have to be accounted for. If it is absent, this can lead to more questions and concern than confidence. If language is used to suggest that the Fed is indeed going to start the program at its September meeting, it can offer a differentiation to the Dollar's monetary policy 'advantage' that revive some of the premium it has lost through 2017. An eye should also be kept on any reference to concerns over the excesses in the financial markets - particularly in relationship to their being built upon the foundation of monetary policy. This has been a more common remark in both minutes, among individual Fed members and even across other central banks. That can more distinctly draw the connection between monetary policy and risk trends - which is still an exceptional bubble and risk.

Looking at the implications of this event for the Dollar and S&P 500 (as a benchmark for risk trends), there is a heavy skew in possible scenario impact. While that may not entail higher probability outcomes for these strong moves, their impact is so severe that we should be prepared should they come to pass. From the Greenback's perspective, the central bank could certainly add to the weight driving the currency lower, yet much of what has seen the Dollar dive through 2017 is the relative policy from the likes of the ECB, BoE and others that are closing the gap with the Fed - albeit slowly. It is highly unlikely that the Fed abandons normalization - it would signal concern over the economy and/or financial system - so the focus will be on the timing of the QE program insinuated in the language. Given the Dollar's slide this year, it is easier to encourage a rebound on a hawkish interpretation. Meanwhile, the S&P 500 has been rallying to record highs and is essentially operating without concern over the dependency placed on monetary policy - and the risk posed as it is removed. We discuss the strategy for this important even in today's Strategy Video. 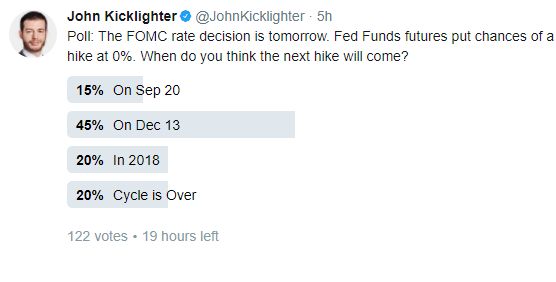 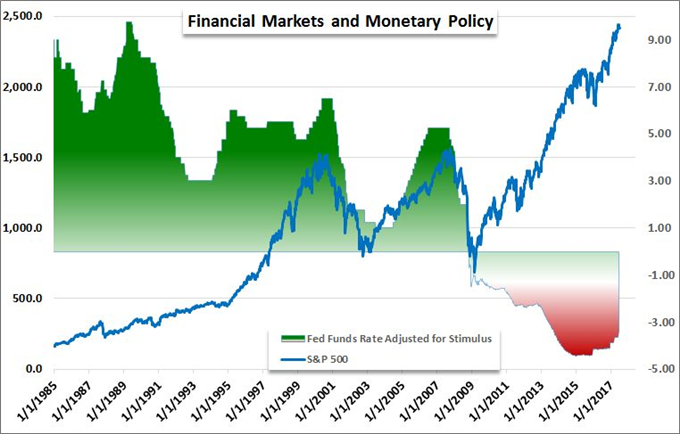