Sign up for the live FOMC coverage and see what other live coverage is scheduled to cover key event risk for the FX and capital markets on the DailyFX Webinar Calendar.

The Federal Reserve's March meeting can implement a significant change in the pace of policy for the US central bank and meaningfully alter the influence of monetary policy on the financial system. At the same time, it may still be met with an utter lack of surprise by the speculative rank. The past weeks have seen a dramatic rise in anticipation and strategic positioning heading into the event. The market's forecast has risen from a 40 percent probability of a hike at this gathering to 100 percent (certainty). That would shorten the gap between efforts to tighten from 12 months to 3. Already, uniquely positioned at the hawkish end of the policy curve; this would significantly lever the contrast.

The details of this event are important given the scale of anticipation. A hold on rates would likely be the most extraordinary outcome for this event with a severe drop for the Dollar and uncertain view for the risk assets. That said, it is very unlikely. A hike will shift the emphasis to the accompanying forecasts for rates. The Fed in December projected three standard hikes (75 basis points total) through 2017. Until just recently the market was running a consistent discount to that view. Now, however, we find the market pricing favoring just such a reach and giving substantial probability to a fourth and non-negligible speculation of a fifth. In these terms, keeping the course could actually disappoint. Another wild card for this broad event is the possible mention of plans for unwinding the balance sheet. This may be further into the future, but it is unlikely to simply be left to the whiles of time (allow assets to mature).

Given the buoyant expectations for this event, it is easier to disappoint Dollar bulls. Meeting expectations in this case may represent a serious hawkish policy bearing that contrasts substantially to the Fed's largest counterparts; and yet, it can still see the currency slip. Consider the lack of traction the Greenback found despite confidence of a rate hike rising from less than 50-50 to certainty. It was this speculative restraint that sets the stage for a range of measured technical setups for the Dollar crosses. Particularly, a pullback for the USD would cater to patterns on GBP/USD, USD/JPY and USD/CAD. A further caveat to consider is that the scales of global monetary policy are changing around the Fed's efforts. Shifts in Bank of Japan and European Central Bank bearings these past months stages the early phases of normalization. Recalling the Dollar's very early speculative attachment to a distant hawkish view, this can represent an important skew. We discuss the strategy, influence and opportunities around the upcoming FOMC decision in today's Strategy Video. 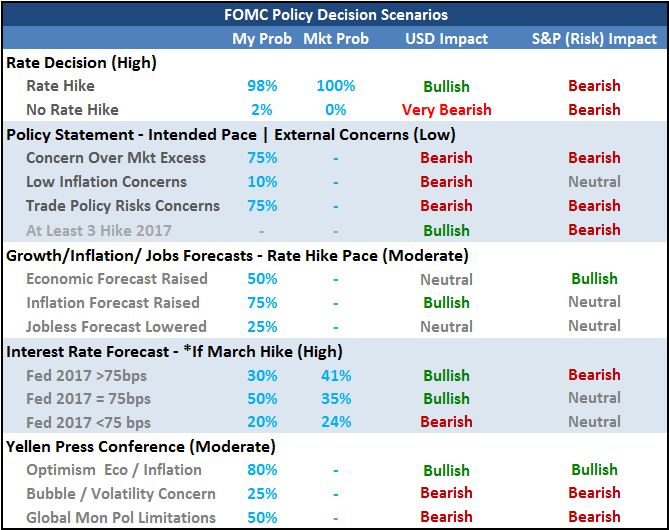