How strong are US equities? As with most asset classes, that appraisal depends on a more existential question: how robust is investor sentiment. While unique fundamental drivers can arise, investor confidence eventually wrests control of the yoke. And, its influence is universal. One of the assessments we run on the market is the bearing and intensity of 'risk trends'. If we were taking US equities as our measurement, it would seem that bulls are still in control and speculators are a push away from stoking a new leg higher. However, when we look across the markets, that sentiment does not look evenly distributed.

Considering the universal nature of sentiment, when appetite for return outstrips our fear of potential capital losses; we expect to see most assets better known for their return rising. In the reverse scenario, it is assumed those same assets would tumble while havens climb. That said, the climb to a record high for the benchmark Dow Jones Industrial Average showed little company outside of US shares. Global equities were either stagnant or in the early stages of retreat. Assets further out the risk curve - Emerging Markets, high-yield fixed income and even Treasuries ETFs - were dropping fast. That does not look like the robust investment environment backdrop.

There is much to suggest that global risk appetite is not at play, and proposed changes with the White House switch are conferring benefit to local assets. That may last for a short while, but these are global markets and further the imbalance of complacent markets only increases the threat of a sentiment flush. We look at the short-term (5-day or 1 trading week) correlation between the S&P 500 and other favored risk assets running different courses which show exceptional consistency. That insinuates a very unusual deviation that would snap back when larger market forces are reconstituted. We revisit the global risk concept against a prominent deviation in US indices in today's Strategy Video. 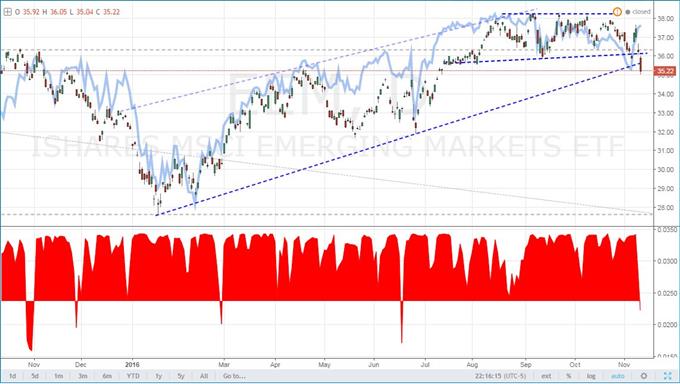