What fundamental theme will change the course of the global markets? While much of the focus will be fixated on a perceived trigger - an event that is significant enough or occurs during a period of instability - the motivation for a lasting and deep change in sentiment will draw from more systemic imbalances. There are few distortion as large and broad as the appetite for returns versus the true risk the chase represents to market participants. Optimism has evolved into a fever reach for yield over the years, and the rank have felt comfortable enough to persist owing in large part to the support offered by monetary policy. When confidence in the capability or size of the efforts falter, a wide gap between market value and cost will need to be reconciled.

Human nature rendering reckless investing and trading is a factor in the state of the market; but these conditions were permitted and even encouraged by the collective efforts of the world's largest central banks. Their efforts to charge growth by lowering rates to the floor and pursue stimulus to encourage market and economic circulation came with risky side effects. The longer the support was kept in place, the more obvious the side effects were overpowering the benefit of the medicine. Extremely low yields would necessitate greater exposure to compensate - and why not, perceived volatility (risk) was low. The reach for returns grew more intense as the benchmarks continued to chug higher. Subsequently, the gap between traditional value and the price paid for admission hit unprecedented levels. What was a source of support initially turned into an essential foundation of fading hope. When the sanctity of the support falls through or the central banks pullback far enough, participants will be left to more harshly evaluate their position.

Confidence in monetary policy is already a stress in the system. We have seen the ECB's most recent efforts at escalating the dovish effort (December and March) result in clear skepticism via the Euro and local markets. The cynicism for the BoJ was even more punishing. There is an imperceptible point where the scales tip far enough that sentiment can fall through. Yet, it may be the central banks' own actions that bring that eventuality forward. the Federal Reserve already moved to rein in its support with the Taper in 2013 and rate hike this past December. Both the European and Japanese central banks - which collectively taken the mantel of global stimulus from the Fed - have suggested limitations of effective monetary policy. They have also started the process of capping off their efforts. Between the Fed, ECB and BoJ; there will be a point where sentiment in these critical three falters. We discuss this stress point and what it means for risk trends in today's Strategy Video. 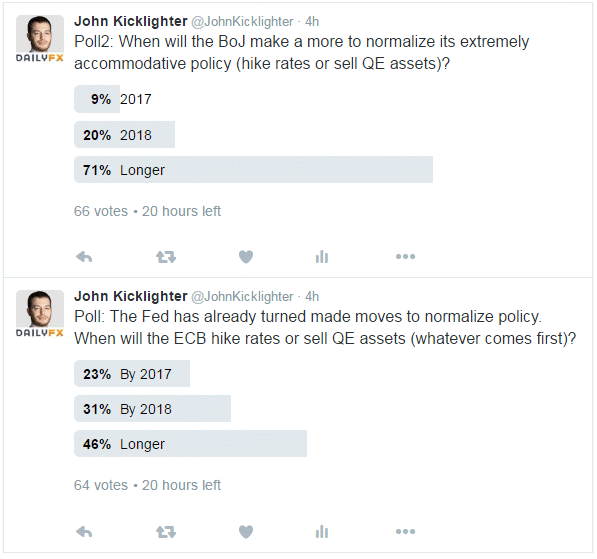