There are plenty of reasons for investor sentiment to flounder, but speculative appetite rarely follows the textbook implications from fundamentals. With the most recent systemic threat in the flare up of diplomatic and economic threats between the world’s two largest economies – the US and China – fading from the spotlight as quickly as they entered, it was perhaps not too surprising to see the seemingly unflappable drift higher in risk assets continue through Wednesday’s close. From the S&P 500, this past session’s close notched the highest reading we have seen from the benchmark in two months, though it was hardly a break that I would say is backed by conviction. It seems instead that complacency is ‘tolerating’ the counter-trend bounce we are currently experiencing. That said, the move is not light on technical influence. Not only does it put us at multi-month highs, but it has also crossed the 100-day simple moving average and the midpoint of the March to June bear leg. It just happens to lack a fundamental backing and sports one of the smallest four-day ranges of the year… 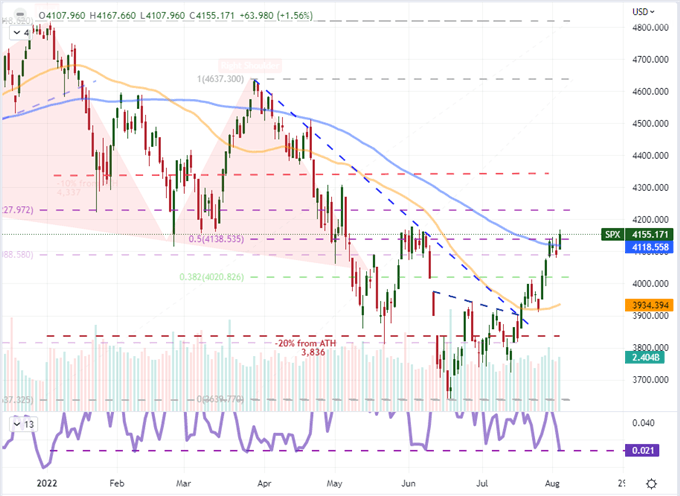 Even if complacency is as the root of the market’s bearings, there is no ignoring the progress. As a companion to the S&P 500’s choppy climb, we also have the VIX volatility index floundering at multi-month lows after the brief respite from this week’s open. Among the speculatively-aligned benchmark, it is worth honing back in on the tech-centered Nasdaq 100. The index is in similar shape to its broader cousin; but through this past session’s close, it was on the verge of returning to a technical ‘bull market’ which is defined as a 20 percent advance from a cyclical low. This milestone will likely garner significant fanfare, but I wouldn’t place all of my confidence in that technical definition. 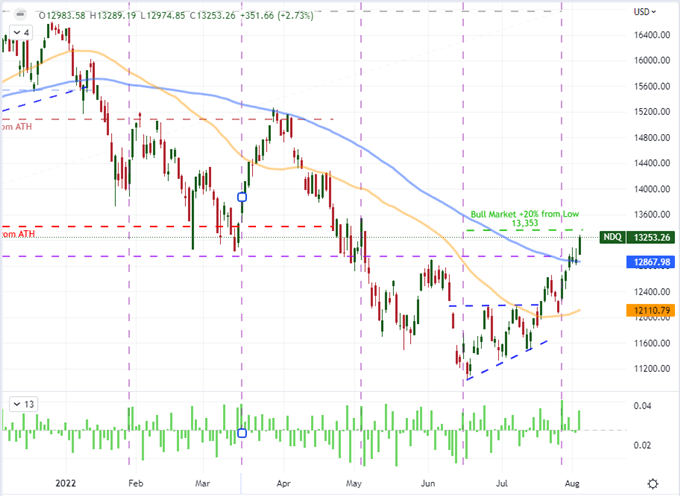 I am generally of the view that more than a few major economies are facing recessions through the end of 2022 or early next year. That said, the outcome is not at all inevitable. While I don’t take the Fed rhetoric that a ‘soft landing’ is as easy as they suggest, it is also probable that the deepening US 2-10 yield spread inversion necessarily furthers the inevitability of an economic contraction. In an unexpected twist for the economic projection around the US this past session, the ISM’s service sector activity report unexpectedly advanced for its July reading. This activity report covers essentially three quarters of economic activity, so it carries significant weight for the economic outlook. What’s more, there was notable strength in the forecast, employment and supply chain related elements of the report. A US contraction is still likely, but perhaps it will be a brief retrenchment. 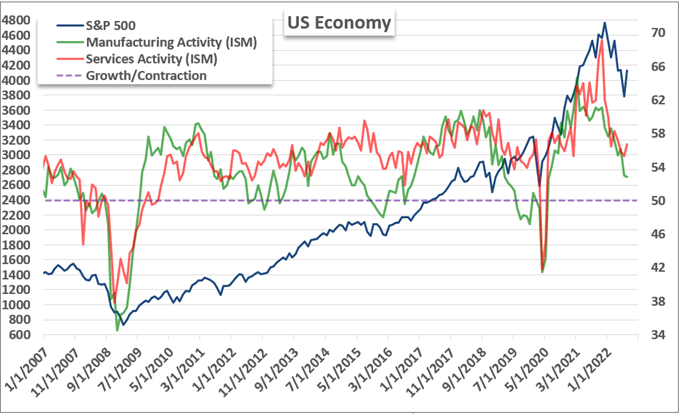 Taking a closer look at the components of the service sector report, the employment measure offered its own surprise. While the 49.1 reading was still below the 50.0 growth mark, it was a significant recover from the previous month’s 47.4. In conjunction with the better-than-expected manufacturing report’s employment component, it looks like the threat of a labor collapse is significantly curbed. While that doesn’t alleviate the pressure of a slower drain on economic activity over time, it does seem to boost the circumstances for Friday’s labor data update. After the disappointing turn from the JOLTS figures, the ISM employment data makes for a speculation on both sides of the economic outcome. 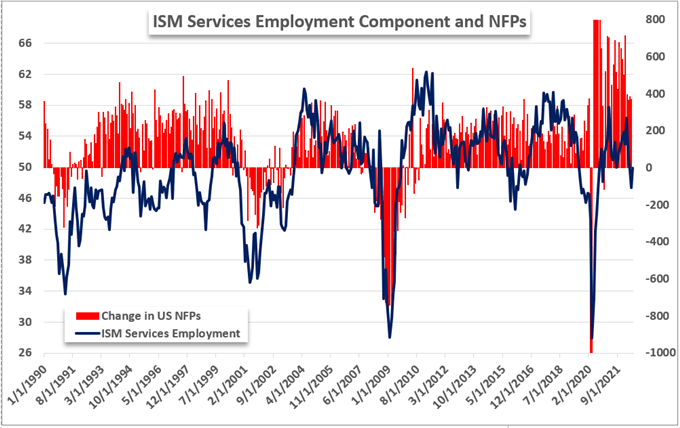 The Top Theme Over the Next 24 Hours: Monetary Policy Speculation from the BOE and Fed

While the US NFPs on Friday is arguably this week’s top event risk for total reach, we are still more than 24 hours out from the release. That means we are have to navigate a docket and headlines through Thursday’s trading session that will not be both divergent and distracted. If you are focusing on the S&P 500 or Dollar, it may be difficult to find the establishment of any meaningful trend until the labor data prints – whether it compliments or distracts from the other fundamental elements. On the other hand, not everything is dependent on the Fed’s forecast. A monetary policy event of its own right is the Bank of England (BOE) rate decision due at 11:00 GMT Thursday morning. A forecast for a 50bp rate hike from the UK central bank would represent the biggest jump in rates from the storied group in 27 years. However, don’t simply assume such a move will lead to a Sterling rally. Both the Fed and the RBA hiked rates in large jumps at their last meetings (75 and 50 bp respectively) and the Bank of Canada even moved faster than expected (100 bp); yet the Dollar, Aussie and Loonie are far from reflecting a full-tilt charge. It is better to observe and see the market response here than assume. 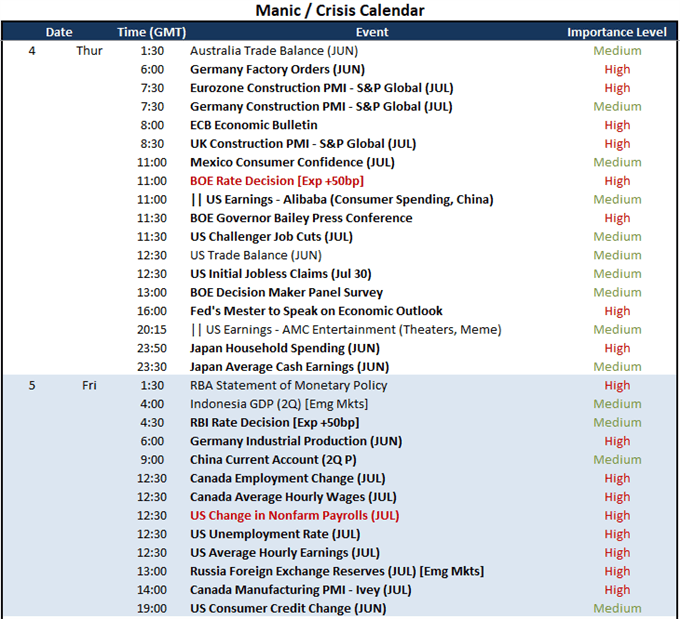 While the Pound earns the most distinct interest from global rate watchers Thursday, it isn’t the only region/currency that is on central bank watch. I will certainly be monitoring the ancillary US labor data due in the session before the official NFPs, but it is that BLS labor report that will pull our attention forward. Looking back once again to the details of the ISM service sector report, the inflation segment offered up a significant retreat in its July update. Paired with the manufacturing report’s own inflation tumble, there is a significant relief to be found in the charge that the group has made to catch up to price pressures. The US policy authority will be reticent to simply response to a swing in a private sector measure for inflation, but history suggests this survey holds a strong correlation to the Fed’s favorite price gauge – the PCE deflator (see below). 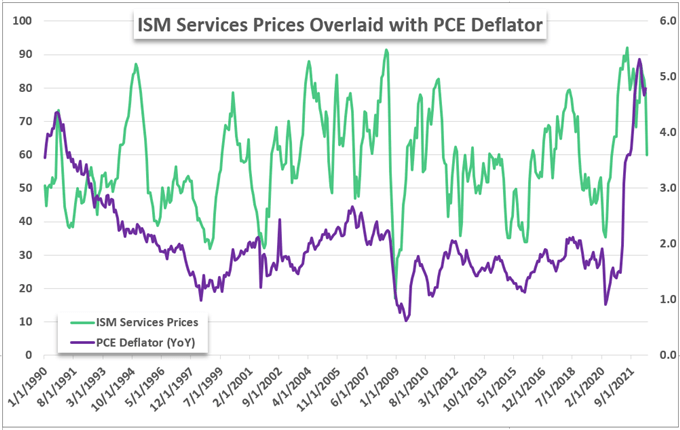