No Disruptions for Risk Trends…But Anticipation

While we are passing through significant fundamental event risk this week, there doesn’t seem enough traction in the monetary policy and recession fodder (yet) to tip the scales on the overall speculative outlook. We will have once more chance to gain serious traction through this final session of the week with a shift in macro focus, but we seem to be living out the normal seasonal expectations of the 29th week of the year. As a reminder, this particular week of the year has historically averaged the lowest level of the calendar year back to the inception of the VIX volatility index. While we don’t have to abide by those historical norms, the index has dropped back to its lowest level in 12 weeks through Thursday’s close. It is that lack of fear that seems to be lifting risk benchmarks like the S&P 500. The 4.4 percent, three-day run has been described a move founded on earnings, a turn in confidence in growth or a general speculative low. I believe this is just opportunism while we wait for a definitive view. 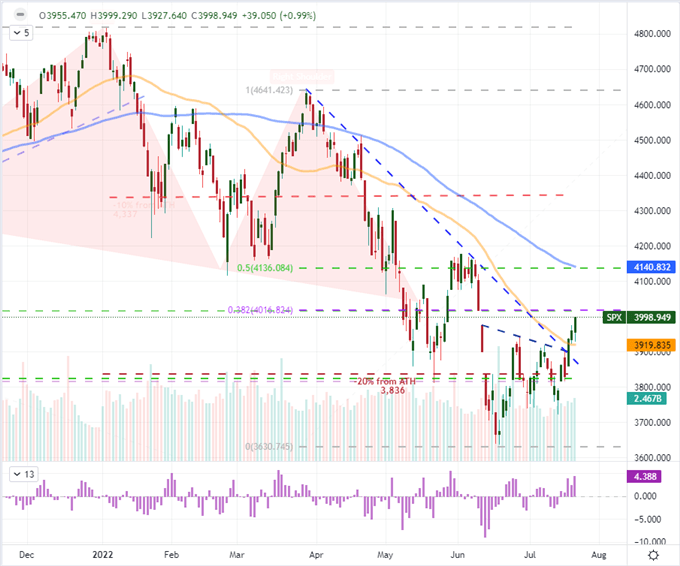 What is the market waiting for, allowing speculative rebalance against the 2022 bear market? Looking out to next week, the top fundamental beacon is without doubt the FOMC rate decision. The Wednesday event is considered the definitive statement on global (or at least, developed world) monetary policy bearing. With interest rate speculation for this particular meeting easing this past session, it is a break in the speculative oppression which bulls are more than happy to take advantage. That said, where the US monetary policy event will draw all eyes in the week ahead, it is far from the only top listing; and I would argue, that is speaks to the less-influential fundamental theme. Between key FAANG earnings, US and Eurozone 2Q GDP figures and the IMF’s updated growth forecasts through the WEO; it would come as no surprise if our expectations were pulled further out. 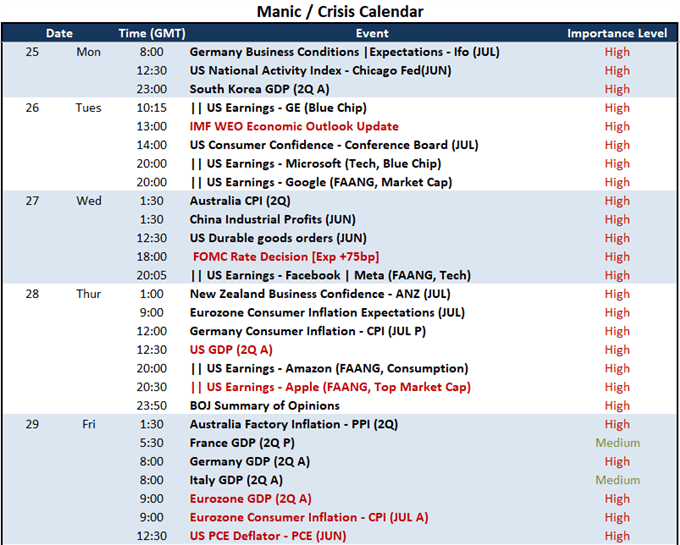 Through this past session, there were two critical central bank updates from the world’s second and third largest developed world policy groups. The tack these two groups could not have been any more different. The first of the two groups to announce its policy decision was the Bank of Japan (BOJ) and it decided that it would stick to the script. What is now the most dovish major central bank in the world eschewed even the possibility of a tightening opportunity in the future with the maintenance of its -0.10 percent benchmark lending rate and yield curve control. While they did upgrade the inflation forecast and referenced the slide of the Yen, there was a pointed effort to reassure that it would not be changing direction. Given rate forecasts, that is not at all a surprise, but the only measurable change was the upgrade in inflation forecasts. Perhaps that contributed to USDJPY’s short-term trendline break and the other Yen crosses to retreat. I am monitoring what this pair does next around the 20-day moving average, but it now seems a FOMC or risk call as to what comes next. 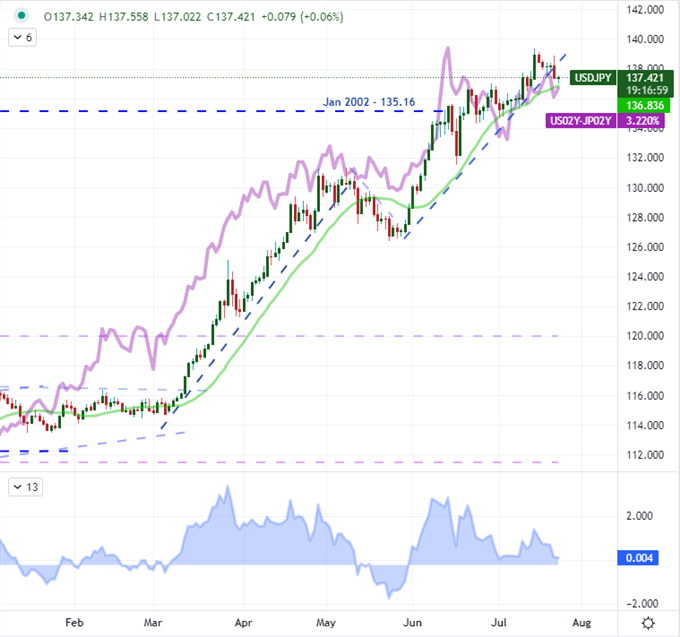 Where the BOJ would keep to its very aggressive policy mix, the European Central Bank (ECB) went through with its first rate hike in 11 years. In fact, the central bank joined some of its global counterparts by surprising with a larger than expected 50 basis point (bp) increase. Last week’s BOC surprise (100bp) didn’t offer a decisive trend in favor of the Canadian Dollar, and the ECB’s announcement didn’t exactly clear out resistance on EURUSD. While the benchmark cross did rally, there was a very notable failure to overtake the 20-day moving average around 1.3000. While the size of the increase was bigger than expected, it was still within the margins of expectations. Perhaps it was the additional complications that has anchored this currency from bigger gains. The recession risks for the Euro-area are already tangibly higher than a counterpart like the US, but it was the ill-timed news that the Italian parliament was dissolved that upped the pressure. The market has put pressure on the central bank’s tolerance for asymmetrical risks across the region by driving the Italian yields significantly higher, and there has thus far been no check from the authorities. Expect the market to pressure the ECB, and a lack of reaction could throttle the Euro. 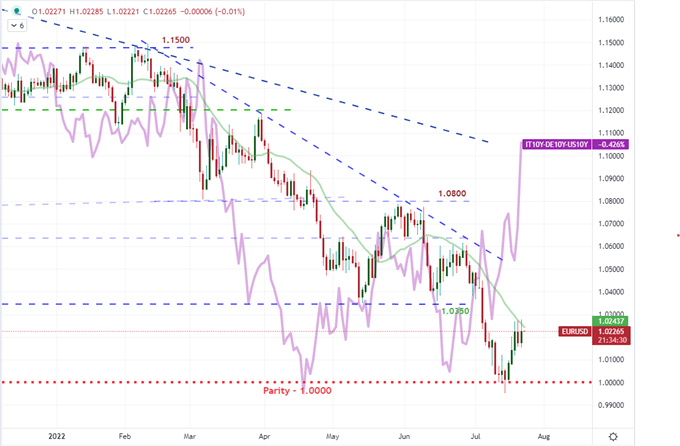 Shifting the Focus from Monetary Policy to Recession Fears

Monetary policy has been the primary focus of the past 24 hours and it will return to prominence next week with the FOMC rate decision. However, I don’t think that it will be a principal driver for the market overall in the final session of the week. We are not without central bank insight Friday. The Russian central bank is expected to cut its benchmark rate by 50 or 75 bps to combat the serious pressures of sanctions in response to its ongoing invasion of Ukraine, but we are unlikely to see a clean response from USDRUB much less in global markets. Instead, the interim is likely to be focused on growth and the unrelenting ghost of recession risks. The 2-10 spread (Treasury yield differential between the 10 and 2-year tenor) is still inverted, lifting up the frequently feared recession signal. There are a few noteworthy economic readings that will cater to this concern including the ECB’s survey of professional forecasters as well as the UK and Canadian retails figures; but the uniform update will come from the July PMIs.

I maintain that the monthly activity surveys for the world’s ‘majors’ from S&P Global (formerly Markit) are good timely and proxy measures of activity against the otherwise stodgy and increasingly discounted government GDP figures. That is not to say that these indicators are given the same credit by the market-at-large as the official quarterly figures, but the observant trader/investor has noted the correlation between this data serious and official statistical bureau reports. We have already registered the Japanese and Australian figures so far this morning, and the outcomes were not encouraging. No contractions (readings below 50.0) as of yet, the day is young and bigger economies are due to update. That said, if there is no serious warning of impending recession to come from this series, it is likely that conviction is saved for next week. 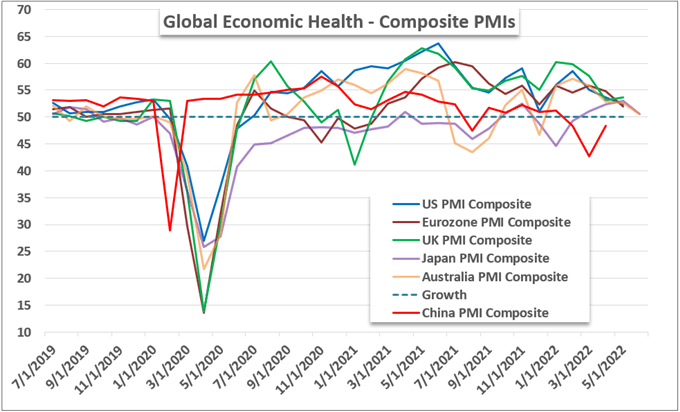