S&P 500 and Dollar Will Break, But Will They Move in the Week Before ’The Week’?

The Week Before ‘The Week’

There was some serious volatility in different corners of the financial system this past week – such as the biggest bearish gap for the Dow Thursday in years – but the benchmarks would not fundamental budge from their course. For the risk-representative S&P 500, the broader trend is bearish; but the past five weeks are more accurately defined as congestion. I’ll note that this is a particularly narrow trading pattern and net speculative futures positioning suggests there is a building bearish concern in futures, but the masses are looking for a clear catalyst before they decide to jump back in or throw in the towel. The Greenback as a carry benefactor and oft-safe haven was in a similar position. Its larger trend is bullish having pushed the DXY trade-weighted index to its highest in two decades, but there was no measurable progress this past week. The week ahead has notable catalysts and historical context for those that hope for volatility, but there is a contrasting influence that may work against progress: what is in store for the next week. Top tier event risk for the week of July 25th is the FOMC rate decision (July 27th); the IMF’s WEO economic update (July 26th) and official 3Q GDP figures from the US and Eurozone (July 28th and 29th). 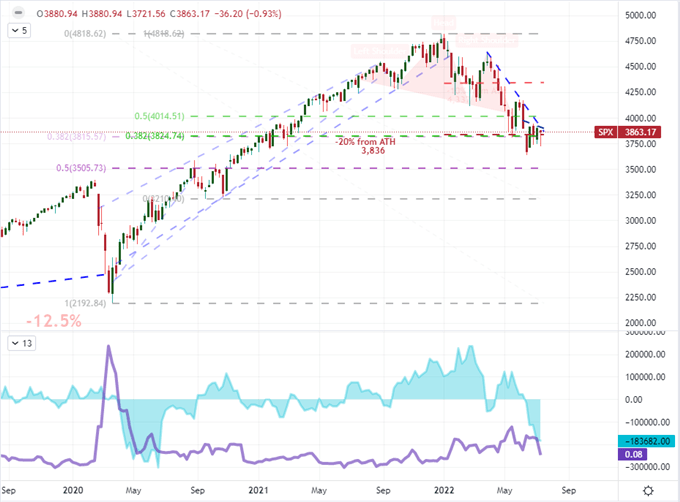 While there is a significant pull of our attention just a little further into the future, that doesn’t mean that we can comfortably resort to range trading in the interim. There is plenty of scheduled event risk through this week alone which can tip the scales of sentiment by starting systemic themes rolling. However, taking the scheduled event risk out of the equation for a momentum; there are also seasonal considerations that could build up enough speculative traction to force a provocative technical move. In general, the month of July averages gains for risk assets along with a modest pick up in activity from the previous month, but there is a more abrupt development on the further granular level. Historically, the 29th week of the year – which we are entering – experiences a significant increase in the VIX from the preceding four weeks. That is likely the historical average of passing holiday conditions, start of earnings and general timing of Fed decisions. Is there something else at work that makes this norm even more resilient? 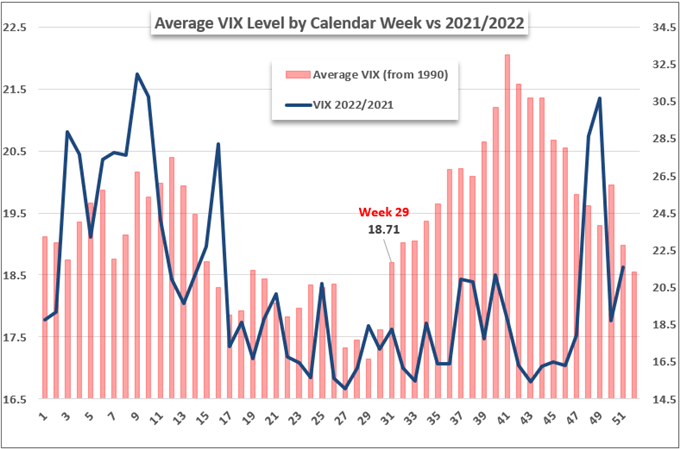 The Fundamental Tempo of the Coming Week

While the larger fundamental themes are systemic and skewed towards the weightier releases of the week ahead, there is nevertheless a meaningful run of scheduled event risk throughout the next five-day trading span. There are a host of meaningful, localized events due for release (including New Zealand, Canadian, UK and Japanese inflation readings); but I’m watching for themes that can tap into deeper investors concerns. The stretch between Monday through Wednesday carries a thread of interest around US earnings. On Monday, we will round out the banks’ performance with Bank of America and Goldman Sachs reporting before the open. There macro concentrations will be meaningfully different with BAC focusing on consumer lending and GS drawing greater revenues from trading activities. Tuesday hosts a run of corporate reports, but the first reporter in the FAANG members, Netflix, will draw on previous sectorial leader and now laggard. Wednesday will diversify the fundamental mix with CSX reflecting growth forecasts and supply chains, Tesla will speak to speculative favorites and Alcoa will be a commodity inflation champion. On Thursday, the theme shifts to monetary policy with the world’s most prominent doves – European Central Bank (ECB) and Bank of Japan (BOJ) – due to report. Friday rounds us out with a growth (or ‘recession’ if the data is troubled) update via the July PMI numbers for the largest developed world players. 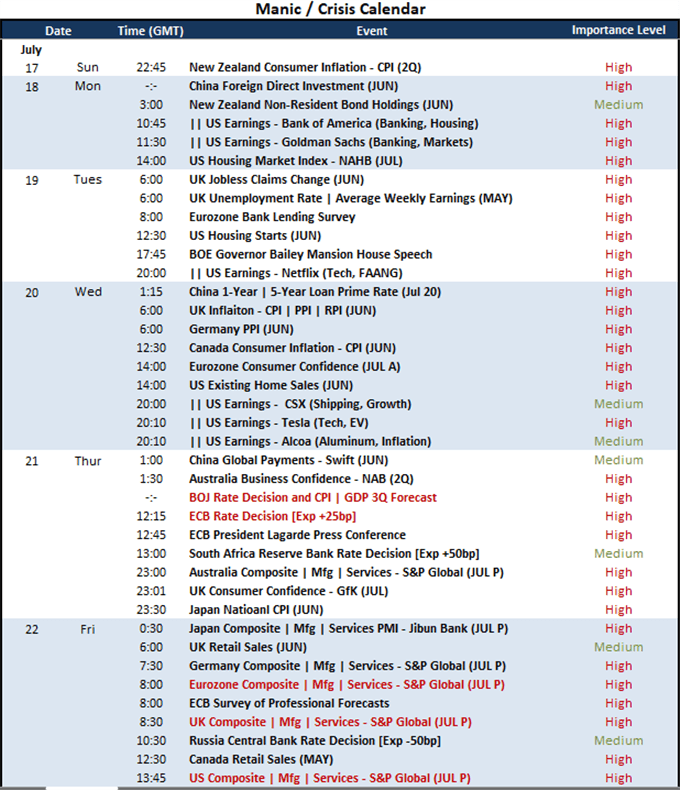 Wading into deeper waters is our best chance of seeing abrupt measures of volatility catalyze into the serious trends that we are truly awaiting. While there is serious focus on whether or not inflation is close to peaking as well as the intentions of the largest central banks – particularly as there is a troubling bifurcation between the largest players – all streams eventually seem to find their way back to the threat of economic recession. In search terms, people worldwide are showing their interest/fears in their Google search habits. The probability of a meaningful economic contraction has risen for the US (2-10 spread), China (official GDP) and Europe (supranational groups’ forecasts) which is a significant enough representation of the globe. Should these fears balloon this week for any reason, scheduled or unscheduled, I’d consider it a risk to general stability. 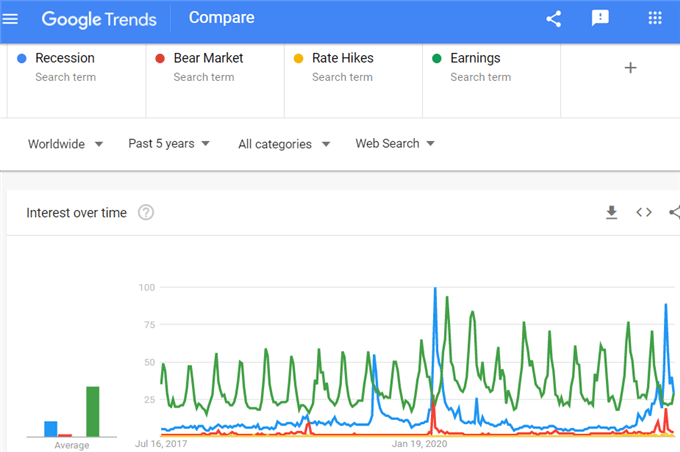 The Markets to Watch: Focusing on the Euro and Yen

From the fundamental focus and scheduled event risk, there are a number of flashpoints for the markets through the coming week. There are inflation charges for the Pound, Yen, Loonie and Kiwi Dollars; but meaningful trends are highly improbable from this data. Aggregate influence seems more potable between inflation reads, earnings and the PMI figures Friday; which could make Gold interesting as the anti-fiat tests the lower range of a two-year range around 1,700/1,680. Yet, from a macro perspective, that ECB rate decision on Thursday is my top economic lightning rod through the week. The holdout bearish central bank is expected to finally hike its benchmark rate by 25 basis points (bp), but that doesn’t put it into positive territory. Nevertheless, it can put an end to an endlessly widening yield differential; and EURUSD’s refusal to break below parity (1.0000) is looking more than suspicious. 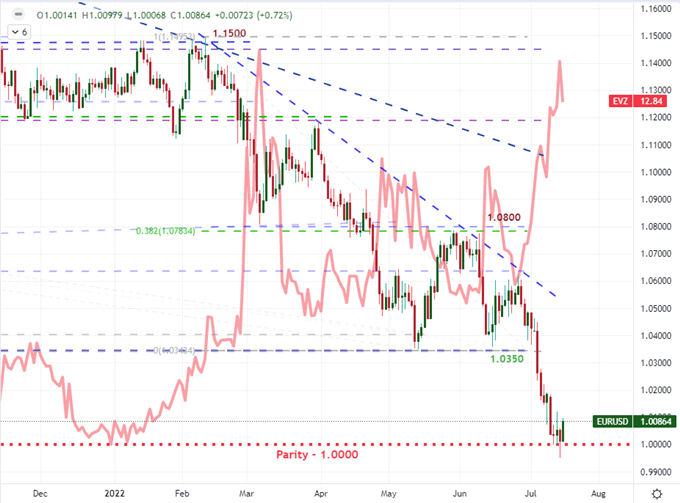 For the regular, monetary policy watcher; the Bank of Japan’s monetary policy event would seem a write off. However, I would not be so quick to dismiss this group’s policy decision. While the BOJ Governor has made an effort to reinforce his commitment to extreme monetary accommodation in charge economic growth, the financial costs of this policy are growing far more onerous. One of the greater issues at hand is the painful exchange rate which has pushed the Japanese Yen to a multidecade low. Not long ago, the US Treasury Secretary weighed in on the Yen, saying the currency didn’t reflect fundamentals and that intervention should only be permissible in extreme circumstances. The only comparable period to this past four month charge is the post-Fukushima USDJPY surge. Does that qualify? 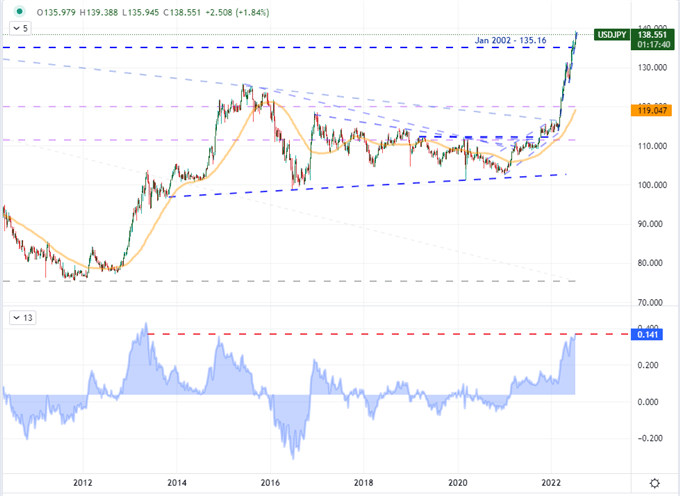