We remain in limbo on the market’s view of broader ‘risk trends’. Despite the general course of speculative progress through 2022 and the overwhelming matters of inflation, tighter financial conditions and recession risks; the typical measures of investor sentiment continue to carve out a consolidation pattern. The fuel is pooled and ready for ignition but the hope for seasonal doldrums providing a fire gap from serious fundamental trouble is strong. We will see how strong the assumptions of statistical seasonally truly are in the face of real issues over the coming weeks. For now, my preferred ‘one look’ (and seriously imperfect) measure of risk appetite, the S&P 500, is developing a consolidation pattern that could be argued by a technical analyst as a short-term inverse head-and-shoulders pattern. This index has just as much potential for bearish continuation as any other speculative ambassador; but for me, it serves more effectively as a measure for a corrective phase. The level at which the SPX slipped into its official ‘bear market’ (20 percent correction from all time or cyclical highs) is now standing as an overhead with overlapping technical cues at 3,835-3,800. If we do break, I don’t think it changes the calculus for ultimate trend and momentum. 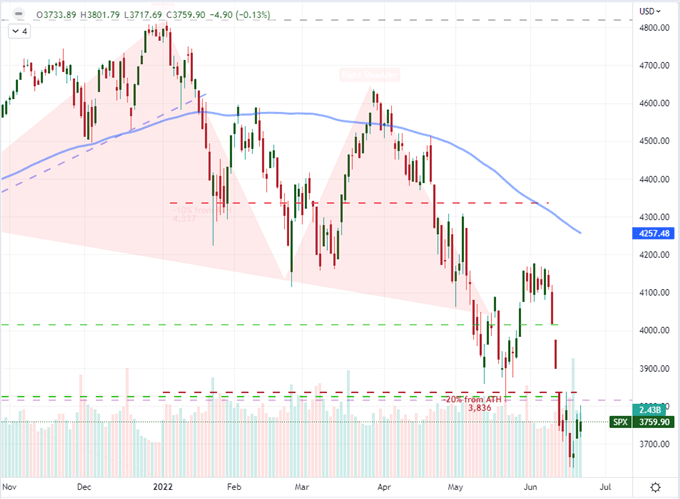 So if the S&P 500 is my measure for a corrective phase – I’m not really looking for outright bull trends – what would be a viable candidate for confirming the bears as retaking control? The Dow Jones Industrial Average has a few levels of meaningful technical weight in the 29,750 – 29,500 vicinity. At the upper end of that range, is the 38.2 percent Fibonacci retracement of the 2020 to 2022 post-pandemic advance. More critical in my book is the is the 29,500 area. While not technically the level of the official ‘bear market’ for this so-called ‘value index’ (that is 29,562 on my chart), there is a pull towards round numbers in markets. Should this hold out of the major US indices capitulate to the regime change from bull to bear, it can exert significant weight on the financial system. 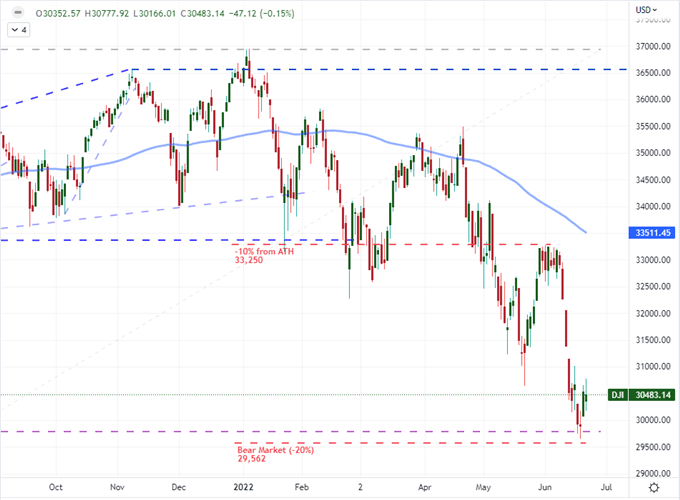 The Power of Representation

Why does the Dow matter in the grand scheme of the speculative overview? For one thing, this particular index is considered to be the lower risk measure among its largest peers. A composition of large market cap, growth stocks sets it up for that perspective. However, even more important in this index’s role as a speculative tipping point is its sheer recognition. While many US traders may prefer the S&P 500 as the benchmark against which to gauge portfolio performance or simply to get access to the ‘market’ by pursuing derivatives like the SPY ETF; internationally, the Dow garners far mor recognition. Consider the Google search interest below that compares the “Dow” to the “S&P 500”, “Nasdaq 100” and “Risk Trends” (for a macro sanity check). The contrast is stark. If this essential representative of equities and market sentiment in general were to trigger ‘bear market’ concerns, it could materially shift the balance of confidence. 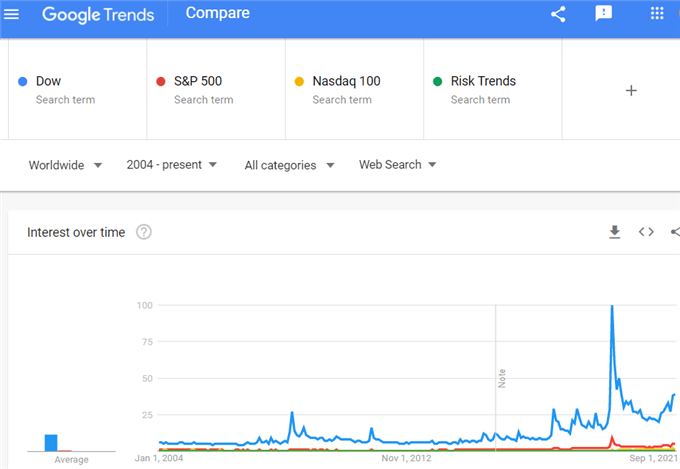 Speaking of the market’s focus, the deep fundamental currents that continue to push the course of liquidity across the global financial system have settled but they have not changed. This past session, there was a range of event risk that fed into the now-familiar speculative outlet for monetary policy. Fed Chairman Jerome Powell cleared his first day of testimony during his semi-annual review before Congress with a few noteworthy updates. He reiterated the pledge to tackle inflation as a principal objective, but he would also suggest that the risk of a recession has risen but it is not something they are targeting (to cut price pressures) nor is it inevitable. Compare that to Philly Fed President Harker’s remarks that a consecutive quarter economic contraction is a possibility. Fed Fund futures are pricing in an approximate 95 percent probability of a 75bp hike at the next FOMC meeting in a month, but you wouldn’t think so through the Dollar’s stoicism. That said, the same lack of reaction was registered from the British Pound as UK CPI hit a four decade high or the Canadian Dollar’s reticence after a significant Canadian CPI beat of its own. We are pricing in aggressive rate hikes going forward, but the outlook is pretty universal. 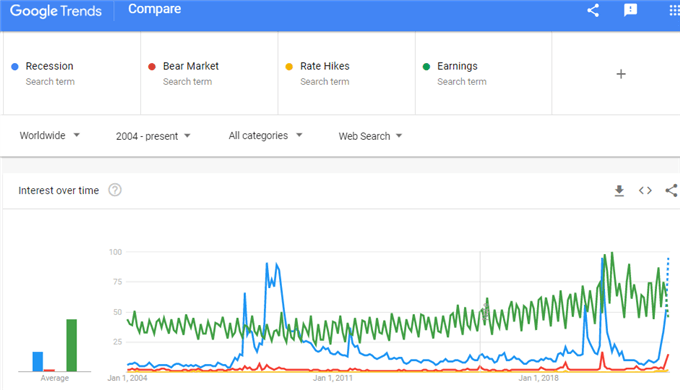 It is difficult to gauge whether rate forecasts or basic sentiment will exert greater sway over the market, but I believe there is a skew in potential outcomes from these themes from here. Rate speculation is remarkably hawkish, but the forecast has priced a considerable charge moving forward across the board – such that there is little disparity between the majors. As for the onus of a recession, that will remain a point of speculation with little in the way of official confirmation for some time. There is one overriding fundamental influence that can turn on a dime and that is risk trends. My view that is upside potential exists, but it would more likely be a choppy and narrow move based on event risk that drives ‘relief rally’ moves. Alternatively, a downdraft can be broad and intense. In the face of risk trends, USDJPY looks particularly prone. It is unlikely that the BOJ can pursue its policy of distinct contrast to its major counterparts and the MOF is likely going to be pushed to intervene the longer it lingers at these heights, but the Yen crosses are most notable for how divergent this ‘risk’ category is to counterpart speculative venues. 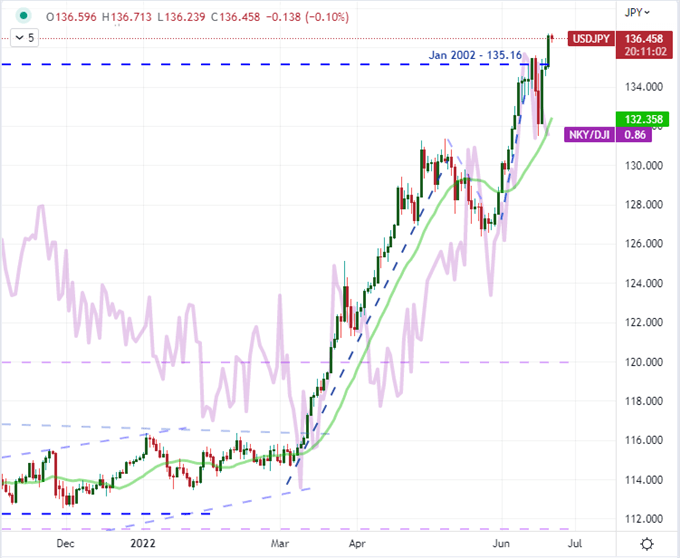 On the scheduled docket, it looks like monetary policy speculation will cool over the final 48 hours of trade this week. While Powell is testifying before the House of Representatives, it is rare that day two on the Hill renders meaningful surprises that weren’t already covered in the first session before the Senate. If anything I will be watching the alternative Fed speak more closely. The Mexican central bank (expected to announce a 75bp hike) and Turkish central bank rate decisions are more decisive but far more global in reach. For recession conversations, we are far more populated with meaningful event risk. Top of the list is the June PMIs which are a far greater capacity market mover should they surprise to the downside against any other scenario. The other top tier – but likely overlooked until it crosses the wires – event is the Fed Brank Stress Test. We had all but written off this assessment at the last update because the banks were judged as being well capitalized. Yet, after rate hikes and significant growth projection downgrades, this is a suddenly important update. Particularly important is the ‘worst case’ scenario the Fed applies. 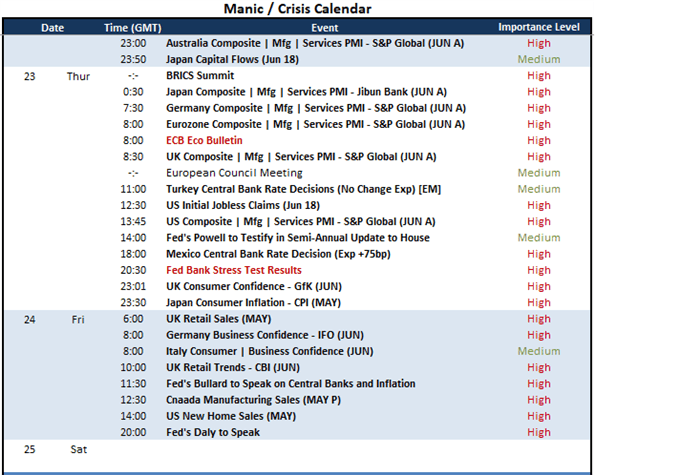