There were a number of top tier fundamental events and themes this past week which, under the right circumstances, could have set the market in motion despite the heavy anticipation in the air. After a month of aggressive speculation building up anticipation for an accelerated path of monetary policy tightening from the Fed, we were finally in the media blackout period that would allow other matters to feed speculation. And yet, it seems the only consistency we would ultimately find this past week was the Dollar’s relentless climb. As expected, the market simply steamrolled through the release of the 1Q US GDP release which significantly missed expectations dropping -1.4 percent against expectations of 1.1 percent growth. It was easier to discount a ‘lagging’ indicator like this, but the earnings side of the equation carried far more potential. Yet through the week, the top market cap FAANG members didn’t seem to offer the full-tilt move the bulls or the bears were looking for. 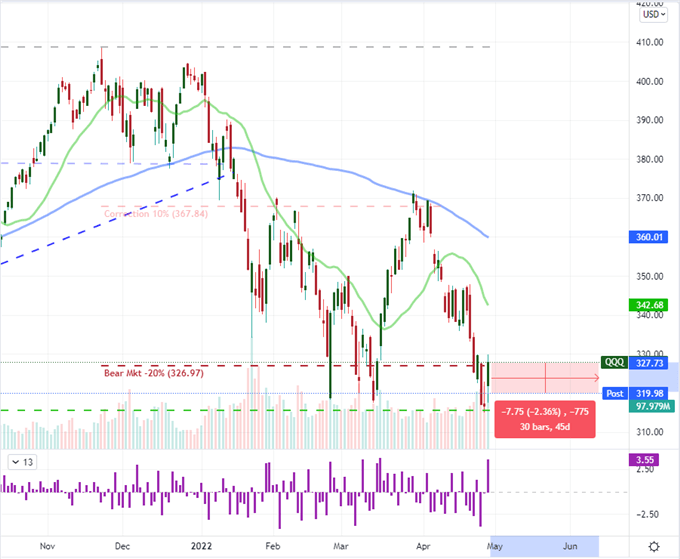 While the US corporate earnings season will continue into the coming weeks, we have certainly passed the peak. With the exception of Netflix (which tumbled after its earlier shortfall on expectations); we were taking in Facebook, Apple, Amazon and Google. Amazon and Google proved outright disappointments with their numbers, but Meta (parent of FB) reported a beat to offset the previous quarter. That left us with a net balance for the Nasdaq 100 where we bounced between 13,500 and 13,000. If there were a range breaker, it would be Apple with the world’s largest market cap at $2.67 trillion. Not only did the company beat expectations with a $1.52 EPS on $97.28 billion revenue, they would also increase the buyback program by $90 billion and raise the dividend a cent to $0.23. Nevertheless, the aftermath of this demonstrably favorable news would still see AAPL slide through afterhours trade. Generally, the same macro worries moving forward with the economy are also weighing forecasts for these key players. 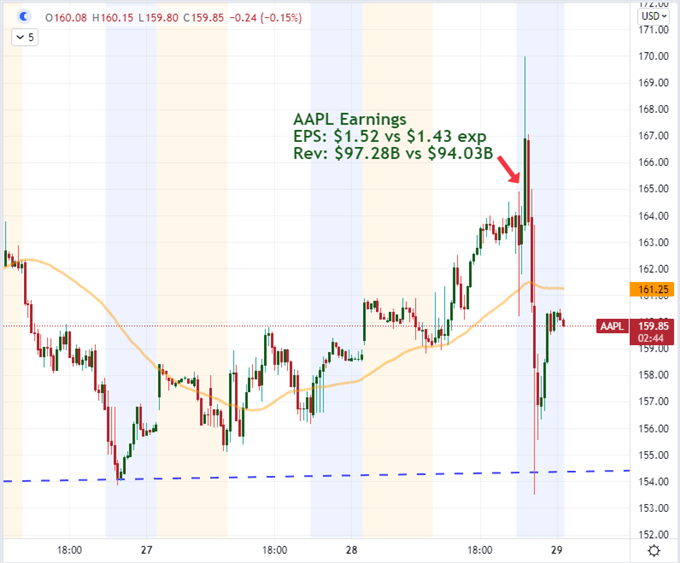 There is still potential for the earnings season to shape markets moving forward, but it is likely that more economic matters will likely generate more friction in the financial system. The growth statistics – both quarterly GDP readings and sectorial updates – will shape the context of the investment environment moving forward. Though it is buried in grander event risk around it, the ISM service sector activity report for April is an important release to watch. Overall though, the week ahead is largely defined by monetary policy. The Federal Reserve is top billing for the global markets’ sentiment mood, but don’t neglect the other major parties due to update on their own policies. Among the majors, the Reserve Bank of Australia (RBA) is expected to hike its benchmark 25 basis points while the Bank of England (BOE) is seen promoting the hawkish tempo of a 50 basis point jump. Though it is a little further off the radar from the majors, it is also worth watching the Brazilian central bank’s policy decision given that it is set for a massive 100 basis point increase – though the markets are anticipating the move. 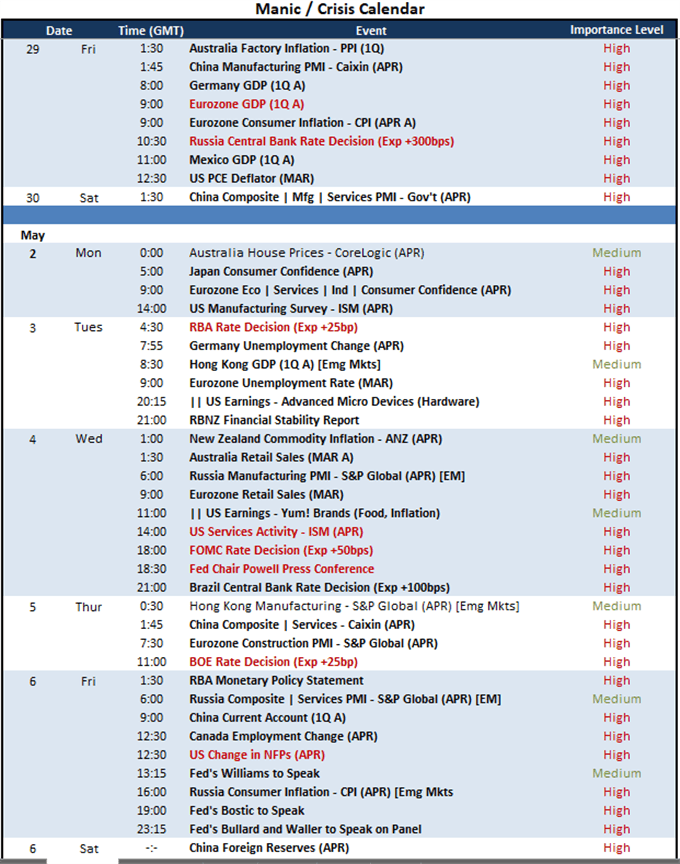 Overall, the FOMC decision should be where we spend move of our mental energy planning out our fundamental scenarios. This event matters because the central bank has spent weeks attempting to overtly raise expectations for a more aggressive policy path moving forward owing to the rampant inflation the world is struggling under – never mind that rate hikes doesn’t help much with supply-side troubles. A 50bp hike is heavily expected by the market (97 percent according to futures) as even dovish members have suggested it is a likely outcome. That is not where the speculative battle of value and discounting will be fought. Instead, the forecast for subsequent adjustments such as rate hike scales in June and July as well as a potential charge in quantitative tightening is where the picture remains murky and highly speculative. For this reason, an announced half percent hike should register quickly and then we dive into the statement and press conference rhetoric that follows 30 minutes later. While equities have retreated significantly and the Dollar has all but left the atmosphere, it is still possible to see the markets stretch even further in these directions. 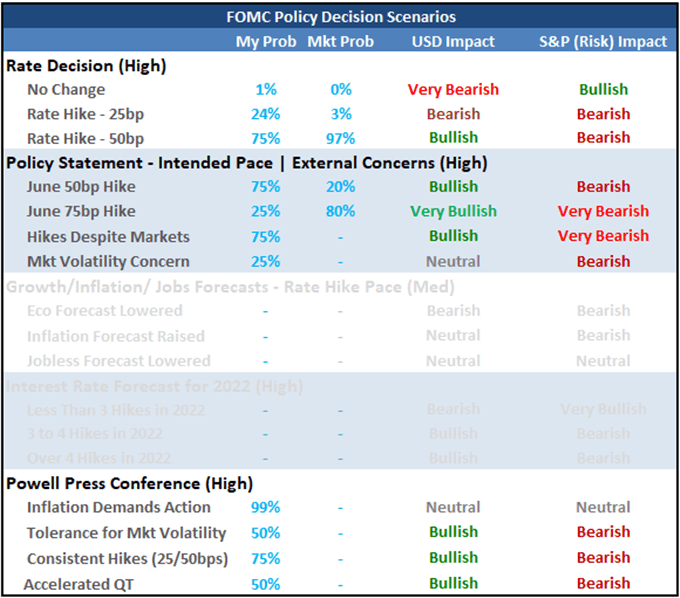 The Dollar and Other Critical Markets to Watch

Just because markets are stretched, doesn’t mean that they must correct imminently. It is always possible to drive markets to ever greater extremes under the right conditions. As far as extended markets go, there are few challengers to the present condition to the Greenback. The benchmark currency rallied for sixth consecutive day through Thursday’s close, pushing the DXY Index to its highest intraday mark since 2003. I wouldn’t say we have definitively cleared the resistance spread out to March 2020 and December 2016, but the market is ready to extend the run given the proper motivation. The trouble is that there must be some technical and fundamental exhaustion. Consider that the DXY has advanced 18 out of the past 20 trading days (equivalent to a trading month), which matches May 2012 for the most aggressive bull phase we have seen on record. Furthermore, the futures market has priced in an astounding 80 percent probability of a 75 bp hike in June; offering enough lift that it is has offset some of the risk sensitivity this carry currency seems to promise. Let’s just say it would be easier to disappoint than impress at this stage. 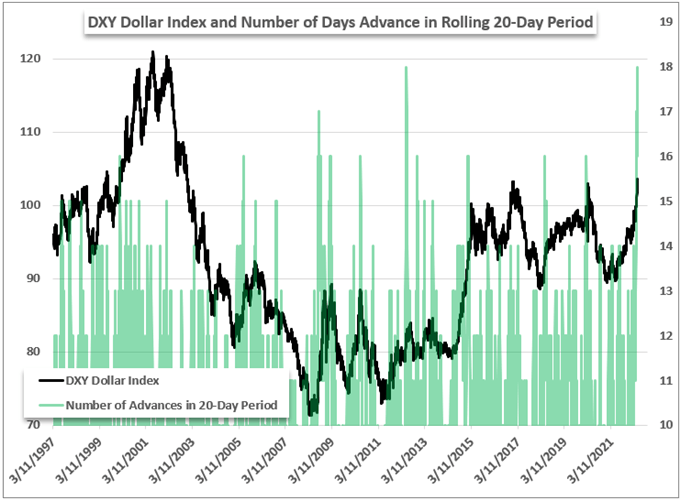 Considering the market’s extremely hawkish path for the Fed, it is important to juxtapose its performance to key counterparts. GBPUSD is an interesting pair considering that the BOE is also seen tightening by half a percent in the week ahead. The trouble is that the UK central bank has not pushed the consistency of hawkish regime that even the Fed doves have relented to. EURUSD has earned its plunge to five year lows given the ECB’s attempt to keep an extremely dovish expectation in place – though the swaps market seem to dispute their options, pricing in 85 basis points worth of tightening in 2022. The most remarkable pair has to be USDJPY. The Bank of Japan this past week reiterated its dovish path and didn’t raise the serious alarms around the extreme depreciation of the Yen. In 8 weeks, the pair has surged 14 percent. That’s extreme. The question I have is if they resorted to stealth intervention whether they could even impact the exchange rate enough to turn it off its one-way course? 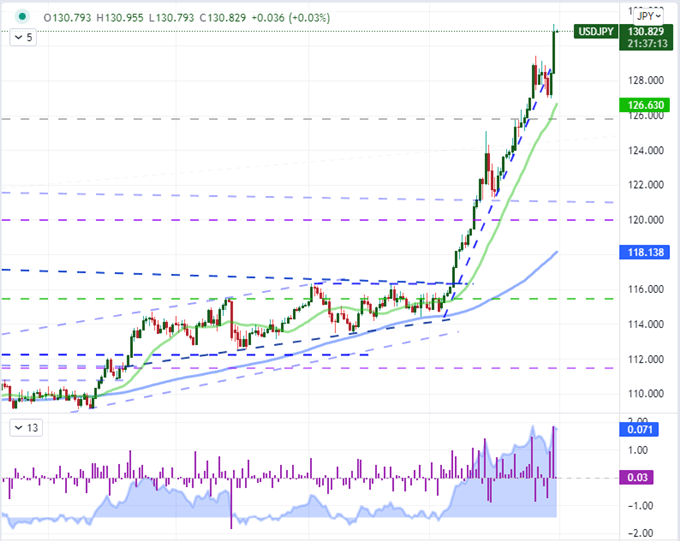 In general, if you are looking to trade fundamentals and particularly monetary policy considerations, it is worth scoping out currencies or assets that won’t be so deeply entangled in the FOMC’s and Dollar’s influence. That can be somewhat difficult given the reach. However, I’m particularly interested in the relative hawkish contrasts that can be drawn in the Pound and Aussie Dollar crosses. If you wanted to monitor maximum volatility around both events, GBPAUD will obviously draw on both events. That said, a Tuesday RBA and Thursday BOE will work to curb as much as motivate. Look through the crosses and isolate pairs that offer the clarity of responding to only one major event. 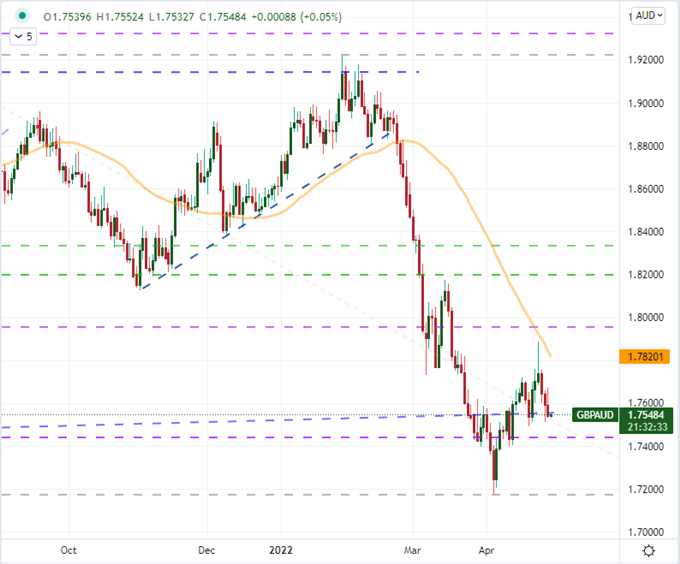