The outlook for normalizing monetary policy continues to solidify, led by the Federal Reserve’s abrupt hawkish reversal over the past month. With the release of the December US consumer price index (CPI) report this past session, the probability of an early Fed hike and steady tightening thereafter looks to be the inevitable path – so long as the economic or financial wheels don’t veer off the track. With that more restrictive outlook, it is natural to expect the market to be more reticent with adding further risk to portfolios. Yet you wouldn’t have gotten that impression from the market’s in the wake of the added data. While the US indices advance very far, they would still advance through the end of the session. For the SPDR S&P 500 ETF, the technical picture was a ‘spinning top’ nestled in a well-established zone of resistance; so the market hasn’t made up its mind. Nevertheless, a bullish close, even a modest 0.3 percent advance, is a fundamentally-unexpected outcome. 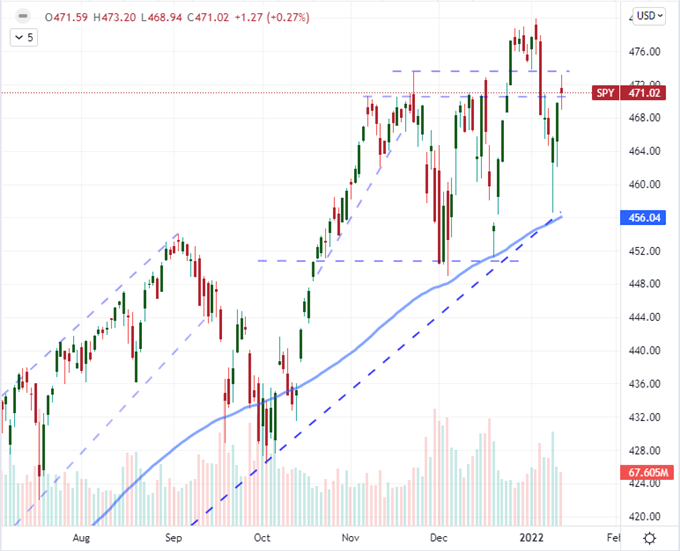 Why are risk assets pushing aside the prospect of higher interest rates which will cut down the net returns of expensive investments? To meaningfully escalate or reverse such significant trends in the global capital markets there is a need for conviction. Conviction for such a large entity is based on participation. As it stands, it seems that there is far less participation from the large players in the system like fund managers, corporates, asset-based banks, etc; which amplifies the impact of the smaller and more speculative crowd. The market tends to reflect the habits of its constitutions, so shorter duration actions that tends to favor technical guidance gains traction. It’s this environment in which we see buy the dip (BTD), fear of missing out (FOMO) and other jargon reflecting on errant risk appetite play out. That said, there has been a notable flag in some of the top performing risk plays from 2021 including alt-coins, meme stocks and new derivatives like SPACs. Notably, the popular WallStreetBets Reddit board saw conversation around disruptor and short-squeezed single name stock tickers overtaken by the general representation of the ‘market’ (the SPY) and even the stodgy CPI economic indicator. 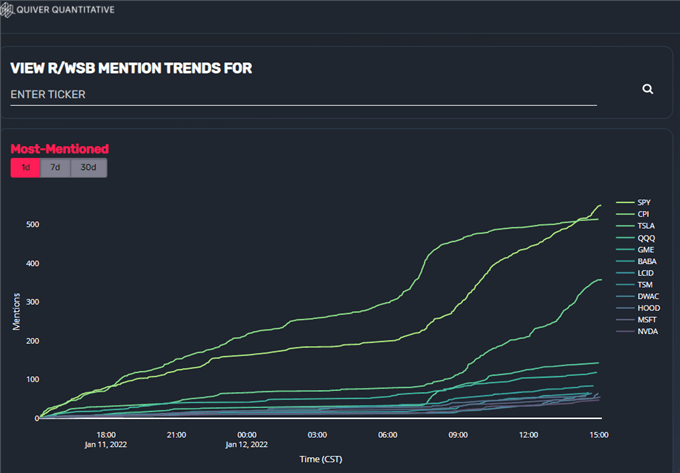 Why is the Dollar Dropping If Rate Expectations Continue To Climb?

The push higher risk core risk assets is likely to flag even if the onerous backdrop of inflation and the subsequent expectation for interest rate expectations were pushing further astronomical levels. A speculative swing in risk assets is not a trend but rather congestion. Alternatively, the Dollar seems to be making a more serious move as of this past session that distinctly contrasts the standard interpretation of FX pricing. Looking to rate expectations for the US via yields at the short end of the Treasury curve (the 2-year was at 0.925 percent) and implied rate forecasts for 2022 from Fed Fund futures (pricing in 81.5 basis points), the pressure is still building. That said, it is a rather slow expansion after a very significant inflation figure. While 7.0 percent headline inflation is a historically extreme reading, it is ‘in-line’ with expectations. Furthermore, it is also likely to peak soon – or start to materially weigh on US economic growth. Either way, the drive for Fed hikes has likely hit its peak at pricing four hikes in 2022 and a placing heavy speculation of a first move in March. 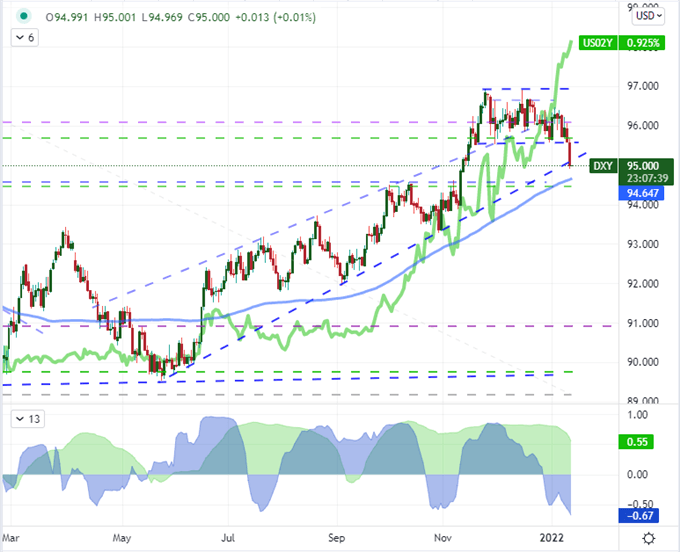 If you look at the Dollar’s trajectory over the past year, the currency has advanced meaningfully in anticipation of the hawkish policy setting we now find ourselves. At a certain point, the Greenback will price in the most hawkish view that is practical. Consider, the Fed is not likely to continue to accelerate its monetary policy ambitions without is peers following in suit. Otherwise, the disparity in policy bearings will create distortions between economies which can cause serious problems. Therefore, an even more hawkish view for the US will build up anticipation of offsetting yields from counterparts or its own yields will start to ebb. Notably, the 20-day correlation between the Dollar (DXY) and US 2-year yield has hit its most inverted relationship since 2014. This is unlikely to last. If the USD is due to find some balance with counterparts, the Pound is in one of the best positions to take advantage. The UK rate forecast is on a very similarly hawkish footing and the 1.3600 break is drawing a lot of attention. 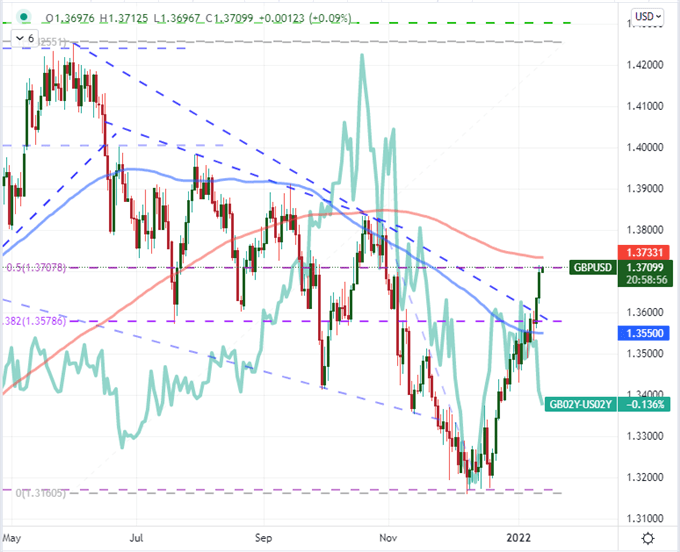 Among the other Dollar crosses, USDJPY is still one of my favorite pairings (it is one of my top trades for Q1 2022) and USDCAD’s breakdown has actually gained a little traction. Yet, another cross has moved up my list of appealing candidates: NZDUSD. The RBNZ has already tightened rates and its outlook was for a run of rate hikes well before the Fed was ready to change its tune. That shift in attention sent this pair tumbling from 0.72 to 0.67, but attention shifting away from the Dollar will once again highlight the close yield outlook yet disparate pricing. I will watch for the inverse head-and-shoulders pattern and 50-day moving average at 0.6855 to break to cue further intent to turn this bear trend. 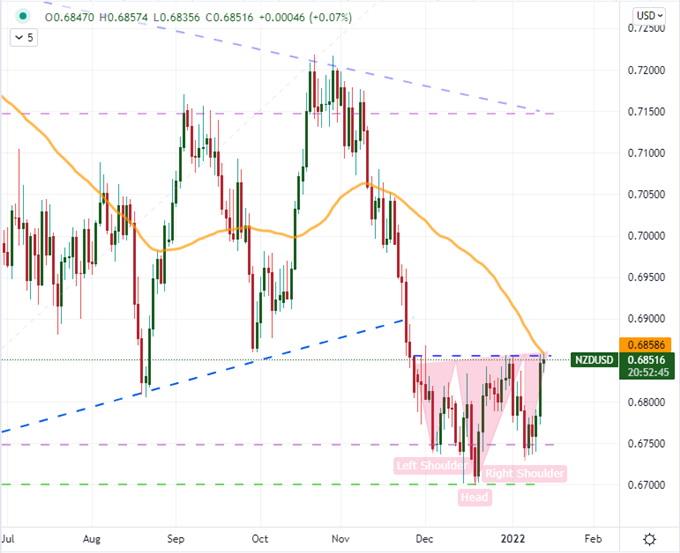