S&P 500 and Dollar on the Hook for Breaks with Evergrande, Fed and September Trade Ahead

Yet Another Provocative Close to a Week

Last week, the Dow Jones Industrial Average closed below its 100-day moving average for the first time in 215 trading days. The technical implications were significant from this ‘value’ index and one of the more prominent risk benchmarks for the wider financial system. Yet, that move ultimately failed to catalyze anything dramatic through the subsequent week’s active trade. This time around, we are going into the weekend with the S&P 500 below its own 50-day moving average. Given the Dow’s reticence to follow the technical playbook, this move wouldn’t necessary raise serious threat to a systemic shift if it weren’t for the expectations that await us in the week ahead. We have scheduled event risk in a run of rate decision centered on Wednesday’s FOMC update and September PMIs; abstract systemic threats in the form of China’s Evergrande default risk and the general assumptions of ‘September trade’. It does not pay to be complacent about risks at present. 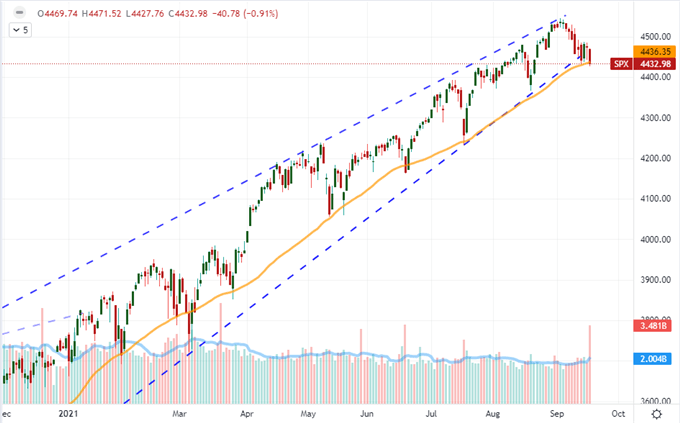 The Possible Sources of Volatility Ahead

When it comes to fundamental event risk, the more defined the timing and distinct the possible scenarios, the less market moving the catalyst general is. There are a few open-ended risks for the market moving forward including the outside probability that the United States’ debt ceiling prompts a sovereign credit rating downgrade or coronavirus cases force a major economy to lock down. These are closer to so-called black swan candidates as they are broadly considered extremely unlikely. Something that carries a far greater potential for occurrence – and therefore represents a ‘grey swan’ in my book – is a technical default by China’s Evergrande. The world’s second largest economy typically rushes to shore up threats to its financial system, but the country is allowing the situation to go right to the brink. Even if the country allows for a technical default, it is very unlikely to allow a contagion across its financial system…unless they cannot control the situation. It is an improbable scenario, but even a default that is contained could reminder the world how much leverage there is across the system.

Chart of Evergrande with Volume Overlaid with Bitcoin (Daily) 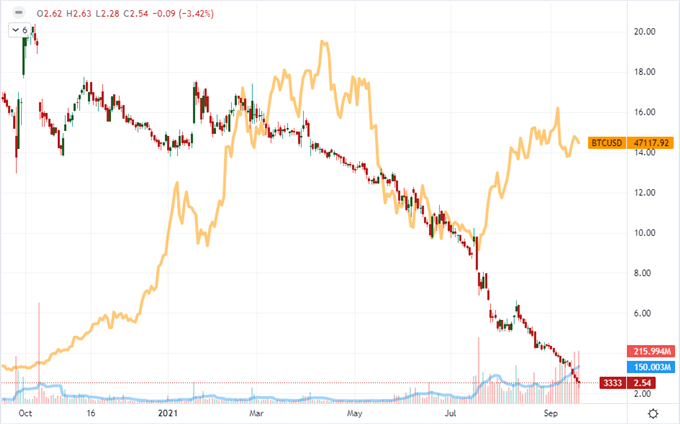 Seasonality is another feature of the landscape for which we should keep tabs. We are moving into the third full week of September and we have registered only a modest retreat in the S&P 500 and other benchmark assets thus far. Historically, this is the only month that registers a loss in the calendar year averaged out over the last 40 years. That said, history does suggest that we are moving deeper into the period of tumult for the broader month and the run of serious event risk we are facing represents very capable ignition source.

Chart of the S&P 500 Performance By Calendar Month 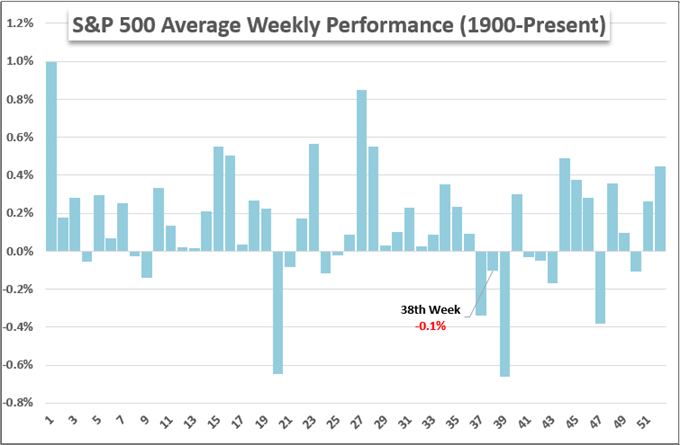 Then there is the sheer density of scheduled event risk in the coming week. While there are noteworthy listings for each day, there is a clear concentration in an approximate 24 hour period across Wednesday and Thursday. There are two general categories for which the event risk falls: central bank meetings and growth-proxy PMIs. Among the monetary policy groups due to weigh in on their policy mix, the Federal Reserve is without doubt the top concern. However, the Bank of England has started to jawbone for an eventual taper of its own, the Turkish central bank has said it will cut rates once its inflation outlook softens and the Brazilian group is expected to hike rates by 100 basis points. In other words, don’t put on blinders to watch only the US authority’s deliberations and forecasts. Alternatively, the advanced September PMI readings are likely to be overlooked until they exact their influence on the market. If you recall, global activity generally ebbed in last month’s data run, so a further slide here – particularly if paired with taper talk – could hold serious repercussions for sentiment. 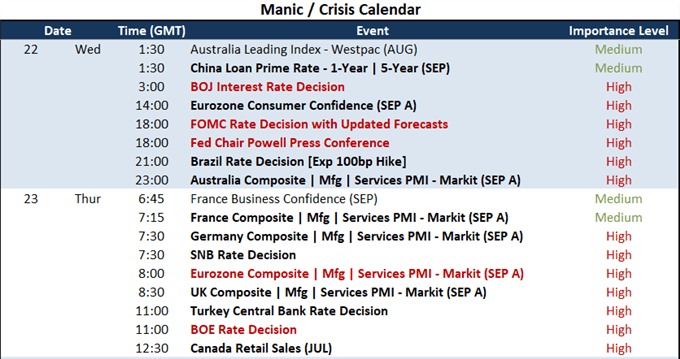 Give the Fed Decision Its Due Credit

While I believe it important to monitor the entire picture for the markets through the coming week, I’m nothing if not practical. It is very likely that the FOMC rate decision on Wednesday at 18:00 GMT is the top market mover on tap. The principal interest is whether the policy authority announces its intention to taper or not. I don’t think this would be an announcement of an actual reduction in purchases now as the markets don’t like surprises and moving quickly to rollback safety nets that have inadvertently become structural supports. If they did make the announcement of a reduction in monthly asset acquisitions, it would likely come with an October or November start date. If they delayed, the next scheduled opportunity to weight the option would be the November 2nd-3rd gathering. Further interesting in this meeting is the updated forecasts as well as Chairman Powell’s insight on key matters such as market froth and the debt ceiling risk. I will be watching a range of assets when it comes to sensitivity to the Fed’s decision, but the core mix should come as no surprise. A little further away from the blast would be the US indices as ‘risk trends’ are remarkably stubborn. More responsive would be the US 10-year Treasury yield and Fed Fund futures which have been far more sensitive to modest changes in speculation over the rate regime of the future. Then of course there is the Dollar. The Greenback rallied into the close this past week which is likely a quarterly rebalance adjustment and perhaps some safe haven bid. This run nonetheless makes a bullish or bearish (hawkish or dovish) outcome a more probable market moving scenario. 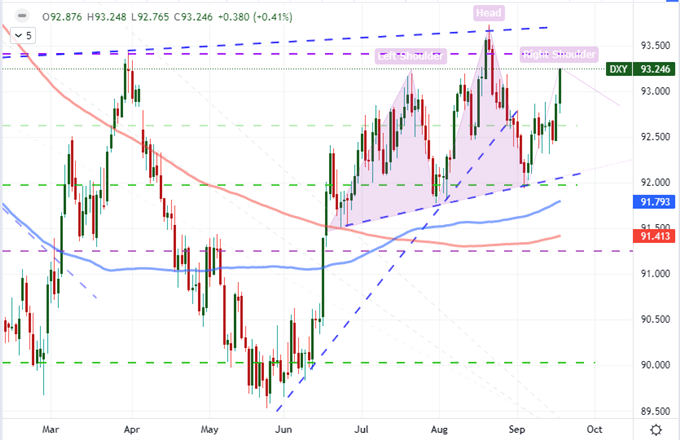 From the dollar-based majors, there are a lot of pairs that I think are worth of attention. EURUSD is the most obvious given its liquidity, but the Euro is likely to act as a counter anchor – which means its commitment to a clear run would signal a stronger move for the single currency overall. A more loaded cross would be GBPUSD (also referred to as the Cable). With the BOE on tap, there is a potential for contrast – as well as conflict if both are either hawkish or dovish. The range it is working with is appealing nevertheless. USDJPY is another pair that is already on my watch list for its extraordinary ranges. If there is a full-blown risk move, this latent mover would be a sign of serious conviction. For emerging market volatility, USDBRL and USDTRY are both pushing technical norms and their respective central banks can readily stir upheaval. 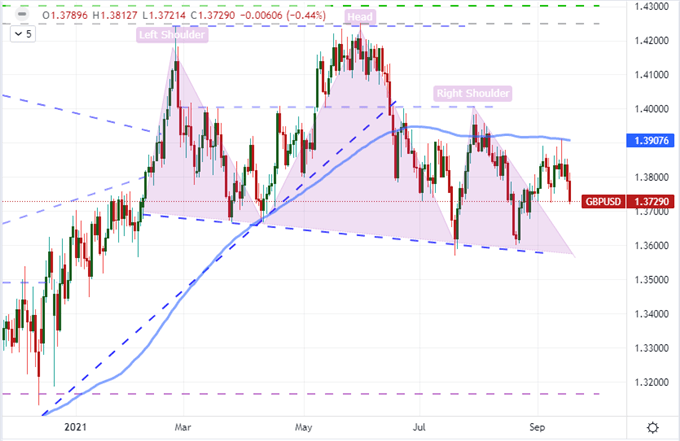