Dow and S&P 500 Tumble Into New York Close, But Is Its Risk-Off for the Thursday Open?

Like most other traders, I take shortcuts with analysis when my schedule is busy. One of the quick references I use most liberally through the trading day is looking at a particular benchmark to get an overview of ‘risk trends’. The scope of sentiment throughout the financial system is not a matter to take like and extrapolate carelessly. If risk trends are legitimately surging or collapsing, the implications for significant movement across a number of assets represents significant risk and opportunity in equal proportion. So, when we have a hawkish FOMC minutes and a benchmark like the Dow Jones Industrial Average seems to tumble not long after the news is digested, it isn’t unreasonable to interpret intent of a grander theme. There is no doubt that the Dow’s and S&P 500’s -1.1 percent is substantial when the 10-day (equal to two trading weeks) ATR was at its lowest reading since New Years Eve 2019. However, before I start readying for the system breakdowns across the markets, it was important to crosscheck other related risk assets. While junk bonds seemed to step in line, emerging markets were more reserved, carry trade didn’t seem to join in and crude oil’s slide seemed to be of its own making. At the very least, I want to see a more critical technical break – such as clearing 34,000 for the Dow – before I believe we are bucking the seasonal trends well ahead of schedule. 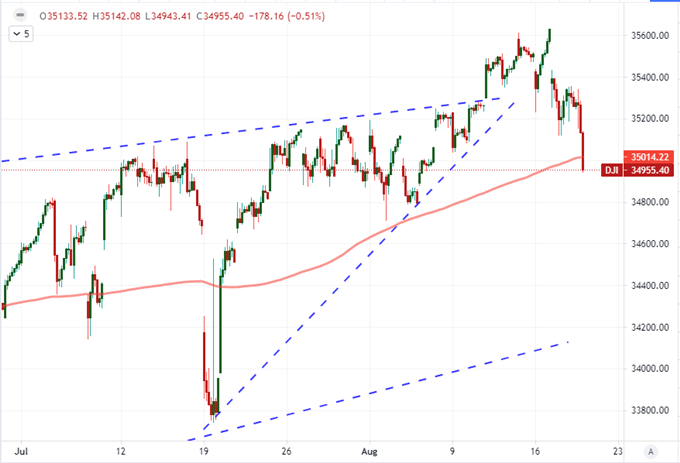 Another point of skepticism for the intent of full risk aversion heading into Thursday is the lack of response from the other end of the speculative curve. Well known safe havens didn’t respond to the intense drop in high profile risk measures. The US Dollar for example refused to break through its immediate resistance during the tumult despite the very high profile nature of its overhead barrier. Gold was another typical capital retreat asset which refused to budge during or after the late-in-session equities selloff. The precious metal is holding below 1,700 which is a midpoint to the past few months’ range and a frequented technical barrier over the same time frame. While Greenback and commodity are not tuned to immediately respond to every wobble in sentiment, this didn’t seem an easily overlooked move in such a thin backdrop. Overall, the Wednesday NY close registers more of a targeted unwind rather than genesis of a committed and global bear trend – a byproduct of thin market conditions of which we have seen quite a bit recently.

Chart of Gold with Volume and 100-Day SMA (Daily) 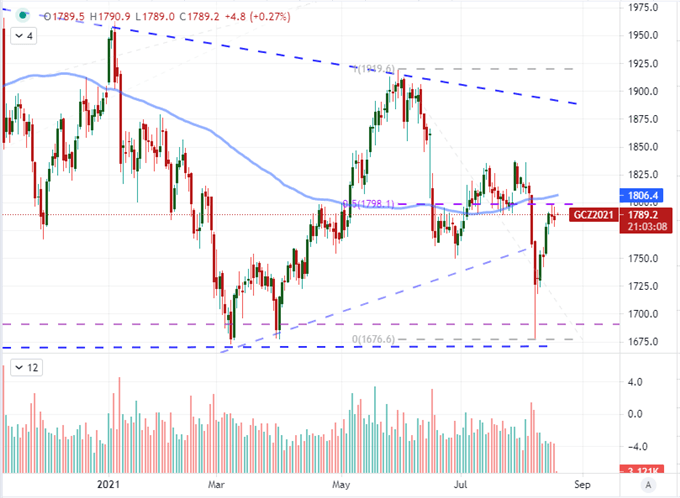 Another interesting reflection of the broader market conditions distortion was found in earnings. My attention was largely trained on the macroeconomic considerations of the reopening of economies post pandemic and impact of consumer appetite with cases rising again. The updates from Target and Lowe’s were particularly useful in this regard. Lowe’s beat expectations and raised forecasts to a 10 percent stock charge. On the other hand, Target would also top forecasts and announce a $15 billion stock buyback, but TGT shares took a nasty spill after a gap down on the open. On a completely different track, there was some interesting take to pull from Robinhood’s first report. HOOD disappointed despite doubling revenues as forecasts were curbed due to ‘seasonal headwinds’. Those are the same constraints reducing volatility and leaving many traders – new and old alike – searching for substantial opportunities in this quiet but stretched market. 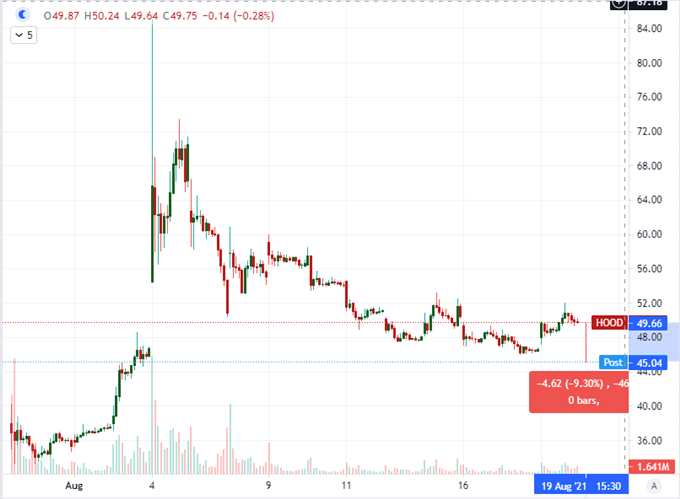 As we forge ahead into the second half of the trading week, there is a notable decline in high-level scheduled event risk. That can be a benefit at times when the market has too many fundamental pulls upon its collective focus. However, it can also prove an issue if there isn’t a driving force already urging markets into a clear trend. This past session’s set of scheduled and unscheduled updates seemed well placed to stir a clear view on US monetary policy. Following the pass by Fed Chairman Jerome Powell to clarify his or his group’s view on monetary policy ahead at his Tuesday townhall, the FOMC minutes was the last official listing on this week’s calendar to give us course adjustment before the weekend. And adjust the transcript did. The highlights that really came through via news agencies – if not all traders – was the suggestion overview that most participants agreed taper should start this year followed by reassurance that this taper is not in fact ‘tightening’, rather it is the curb of more accommodation. That is not something that speculators that have over-indulged in moral hazard want to hear, and it certainly raises the probability of action sooner rather than later. That said, the Dollar wouldn’t respond to the news with a break higher or EURUSD to a break below 1.1700 nor would the subsequent risk aversion add further incentive. As the Asian session has continued, DXY has passed 93.20 and the cross has slipped 1.17 but is a break during the session lull and without little further milestone on the key them ahead really read as ‘new trend’? 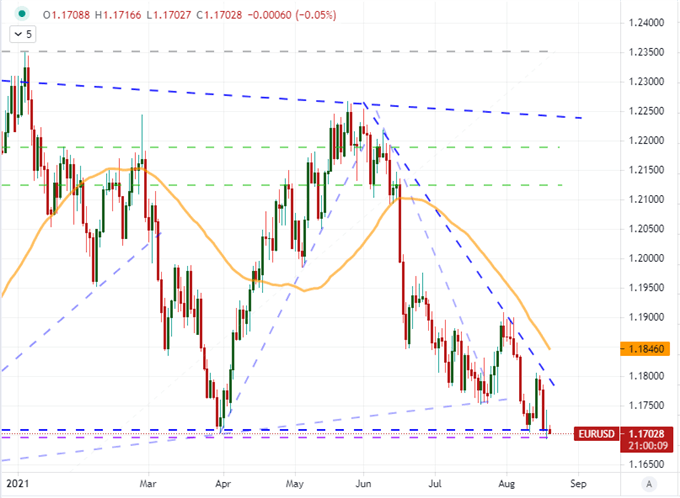 Delving more deeply into the Greenback’s tentative advance with a mind to intent, there is a notable disconnect still on connections that I would expect to fuel the currency’s rally. If we were dealing with just a delayed response to the Fed’s taper intentions in just over a month, I would have expected Fed Funds futures to show an implied yield bump (which it didn’t) and see the US 10-year yield climb overnight alongside the Greenback. Neither has occurred. Nor has there been a material risk aversion in the most popular speculative assets that trade during the Asian session. Nevertheless, the USD bid is broad; so perhaps there is a more rudimentary and/or technical shift back to dollars underway. Yet, those kinds of adjustments are rarely trend motivators on their own. If we perhaps run into more charge on the Fed theme ahead, we may be able to reach enough critical mass. There are no scheduled appearances from FOMC members on my docket, but neither were James Bullard’s nor Mary Daly’s comments this past session on tap. The former clearly signaled himself as one of the most aggressive hawks with a call to taper now, an end to taper by 1Q 2022 and a warning that stimulus held too long held serious distortionary risks for financial markets. Mary Daly seemed intent on balancing out that view with a statement that overreacting to temporary inflation wasn’t ‘free’ of risk to a possibly uneven recovery. 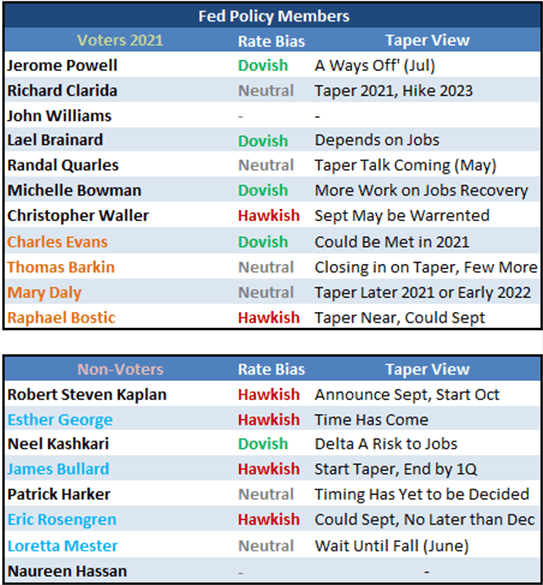 If indeed monetary policy is the most productive potential theme to drive markets moving forward, I will be particularly interested in NZDUSD – though the two individual currencies are interesting in their own right. Not only is this pair’s technical picture remarkable with a nine-month low after a big drop pressuring major overlapping technical support, but the fundamentals in the monetary policy debate are robust. The RBNZ held its benchmark rate unchanged Wednesday morning after the country’s temporary Covid lockdown, but Governor Orr made clear this would only be a delay and the next gathering was a live event for the first tightening. 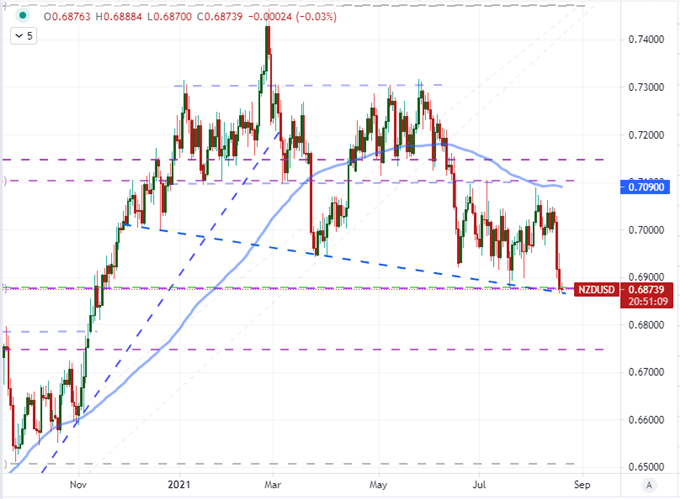