Despite the Fundamental Fuel, The Risk Appetite Run is Flagging

We are heading into the close trading day of the week and momentum behind the risk recovery is clearly flagging. That is perhaps not particularly surprising when evaluating conditions objectively. Market conditions through this period are historically restricted and the economic docket this week was always known to be a lull – with serious, high-level listings in the week ahead. If anything, the volatility that opened this week with a sharp decline in ‘risk-leaning’ assets was unusual turn. With attention shifting from global monetary policy to the rise in coronavirus cases to the pace of the growth recover, it was always going to be a struggle to generate a full trend this week. We can see this moderated conviction play out through the S&P 500. In the aftermath of Monday’s unexpected, sharp collapse, there was an attempt to mount a full recovery. That rebound showed up – leading to a false break reversal for the S&P 500 – but the tempo has faded alongside volume as the week progresses. To push to record highs through the end of this week looks improbable; but if it does come to pass, the follow through would be an immediate issue for eager bulls. 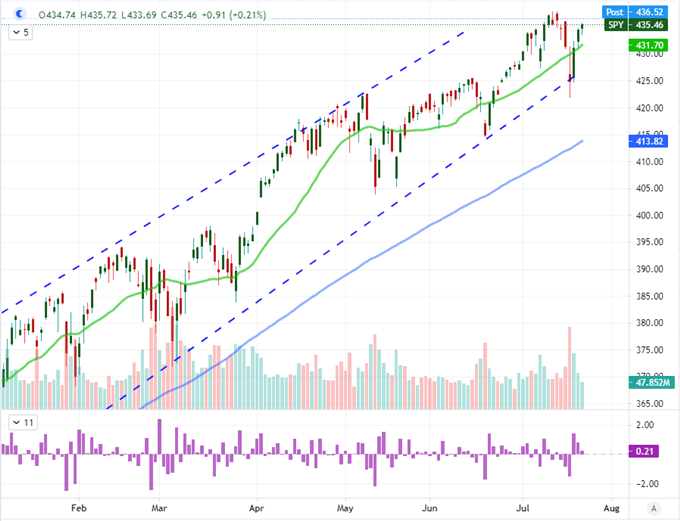 In my internal hierarchy of market influence, I consider fundamental and technical analysis on equal footing at the moment. However, market conditions seems to me the obvious dominant feature of the financial system for active traders. We are still moving through the doldrums of the summer lull and that sets my expectations for what setups are likely to have a reasonable chance at meeting expectations. Liquidity is the overriding consideration in my overview, but that doesn’t mean the other analytical elements don’t matter. From a fundamental perspective, there is distinct competition for our attention through monetary policy via the ECB rate decision we’ve just passed and economic health with the PMIs ahead. That said, search interest and my own Twitter poll show more people are concerned over the rise in coronavirus cases with the rise of the Delta variant. I will keep an eye on the headlines, but this is more of an intangible spark making it unlikely to command our conviction before the week ends. 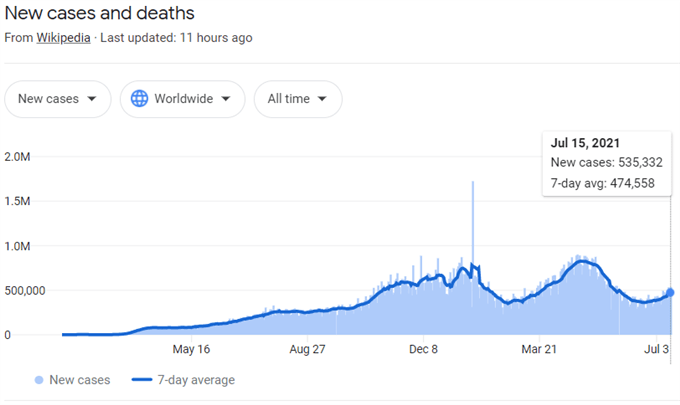 Chart from Google.com with Data from Wikipedia

ECB Not the Motivated Risk Measure Expected…Nor the Euro Catalyst

This past session, the fundamental attention was trained on the impact that the European Central Bank (ECB) rate decision could have on the market. I was of course watching how the Euro responded to the event, but the implications for global risk appetite was also a must watch given the focus we’ve held these past few months. Notably, the world’s second largest central bank with the largest balance sheet (ie stimulus) retained its aggressively dovish monetary policy stance. In fact, the statement that accompanied the policy update was clearly intended to make clear its steadfastness, so much so that it seemed tinged in desperation to project intent. Nevertheless, the Euro did not respond to the news as one would expect. EURUSD and other key Euro-crosses rallied initially after the statement was released. For the benchmark cross, that was a break of least resistance, but it didn’t fit the fundamentals. Therefore, it is perhaps not surprising that the currency reversed course through the second half of the trading day. Ultimately, EURUSD experienced volatility but didn’t commit to a direction nor did it clear its extremely restrictive range. It is now the 6th smallest 17-day historical range in the pair’s record. 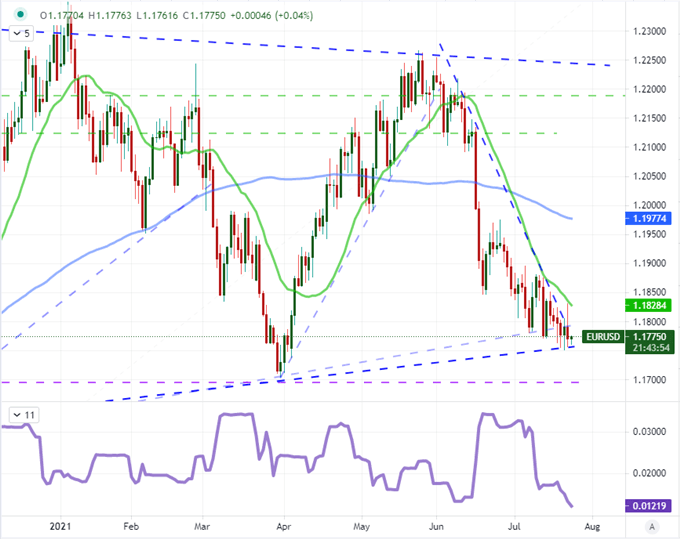 Monetary policy is not done as a fundamental driver as we have the FOMC rate decision on tap this coming Wednesday. However, through the end of the week, the docket seems as if it will rouse little focus on the slow shift in policy intent. Instead, the data on tap seems to draw attention to a completely different matter: economic health. The July PMIs are due for the major developed economies (with the exception of Japan this week). This is capable fodder for relative influence like EURUSD, but I still believe the greatest potential is through systemic risk trends. If all of the readings were to disappoint materially, it could revive the risk aversion that started this week. It is a low probability but a scenario not to write off. 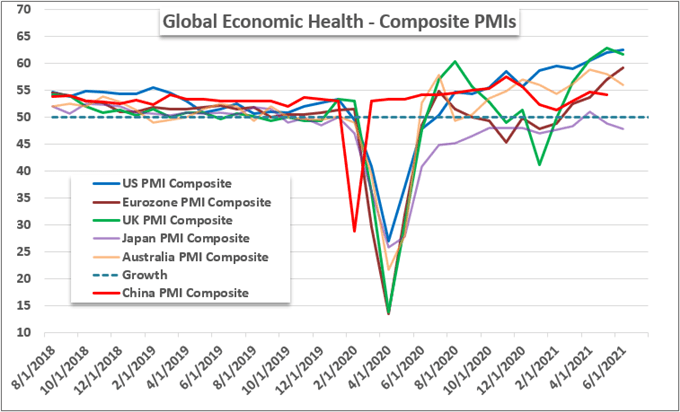 The Major to Watch Through the Close

While EURUSD seems a currency pair to maintain a close vigilance over, it doesn’t seem the most potent tech or fundamental cross through the final 24 hours of this trading week. From a purely technical sense, I am particularly interested in USDCAD. We opened this week with a charge that cleared the 200-day moving average and we have since sparked a retreat that cut down the bullish intent. However, unlike some other crosses that have fully undermined their technical patterns, this cross is still abiding its former trendline support and 20-day moving average around 1.2500. Between the US PMI and Canadian retail sales report, there is event risk here to establish a technical intent – though perhaps not conviction.

Chart of USDCAD with 20 and 200-Day Moving Averages (Daily) 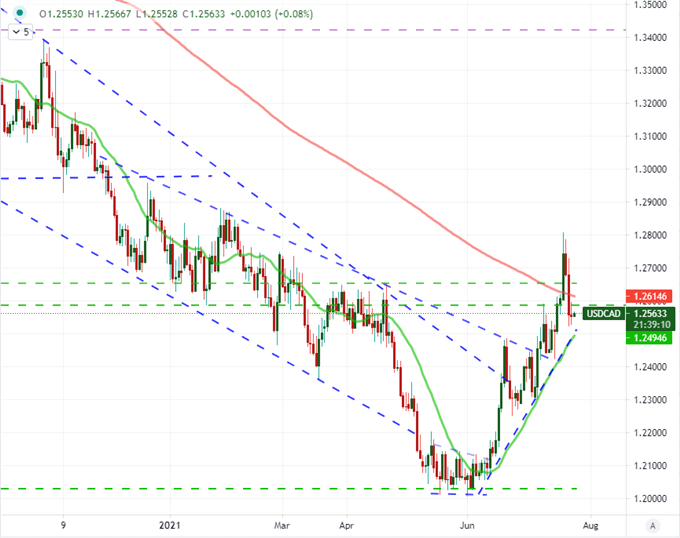 In contrast, GBPUSD has the fundamentals but not the technicals to make a compelling close. ‘Cable’ will be influenced by both the US and UK PMIs ahead which can set a more distinct divergence (or convergence) in economic expectations. That said, the rebound that this pair has established these past few trading days has pushed the pair back within the congestion that plagued swing traders in previous weeks. I don’t like to live by explicit technical boundaries as different traders read different technical barriers, but this ‘former support as new resistance’ scenario will struggle to impress when the market is already steeped in skepticism. 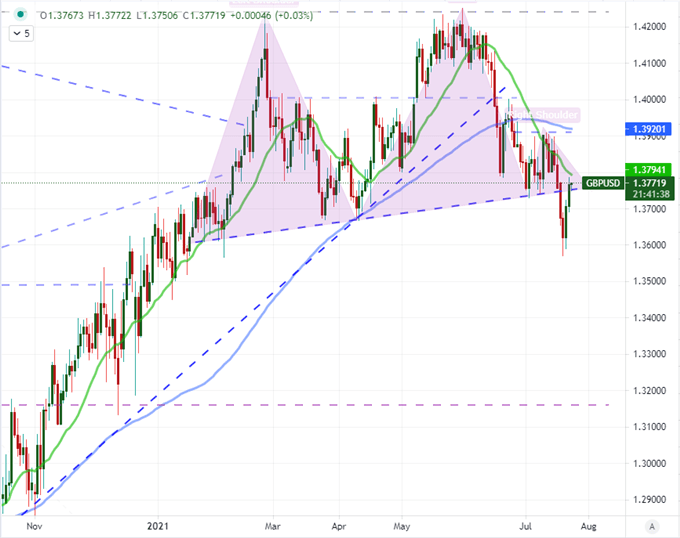