EURUSD Outlook Teeters On a Technical Breakdown after CPI, Much More Ahead

Recommended by John Kicklighter
Download Our 3Q USD Forecast for Free!
Get My Guide

The US CPI (consumer price index) update for June proved every bit of the loaded event that market participants were looking for and the Fed was hoping to avoid. The as-yet unbroken charge in inflation for the world’s largest economy is more than just a whip for the US Dollar, Treasury yields and local capital market assets. It further amplifies interest in global monetary policy’s role in keeping risk-leaning assets elevated overall. In general, a ‘tighter’ policy regime is a burden for risk markets and particularly so when those assets are stretched. I have argued that many benchmarks for speculative appetite are overindulgent relative to their traditional metrics of value, but the major US indices still hold a special status among even the most bullish of markets. Despite their stretched status – or perhaps directly related to it – the S&P 500, Dow and Nasdaq 100 did not respond to the inflation stats with a dramatic move. After tagging intraday record, for the SPX and NDX, the measures closed modestly lower relative to Monday’s close. This could be taken as evidence that the juggernaut cannot be stopped, but I believe this to be in part anticipation for what lies ahead for global risk through the high-level data scheduled for the next 36 hours of trade. 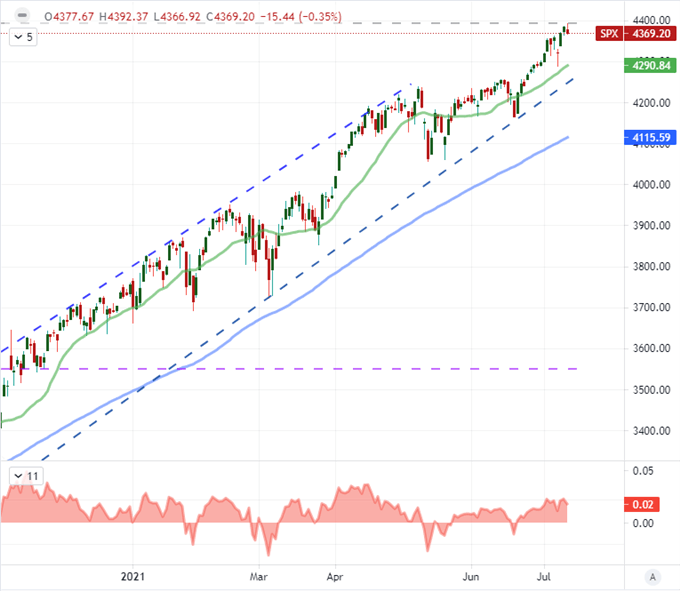 Considering the inflation data more closely, there is a serious debate between those whose beliefs align with the official western central bank line that high price pressures are transitory and the segment that fear that the added burden in permanent. In the raw statistics, the June headline CPI reading far outstripped forecasts with a 5.4 percent pace which is within easy reach of overtaking the 2008 high and returning to levels not seen since 1991. Excluding volatile energy and food prices, we are already at that historical perch with that filter showing a 4.5 percent year-over-year growth. For those that say inflation will recede, the impact of used cars and recent ease in cost for certain commodities seems an obvious temporary factor. However, measures considered more central to consumption habits are rising as well and more companies (like Pepsi and Conagra in their earnings Tuesday) warn the pass through of higher raw material costs are coming to consumers. Ultimately, the Fed has a complex equation on its hand to establish the best strategy moving forward. It could act preemptively and potentially trigger a financial crisis which could be difficult to right. Alternatively, it could allow for burdensome but controllable high inflation to solidify. There is not enough here to force their hand. 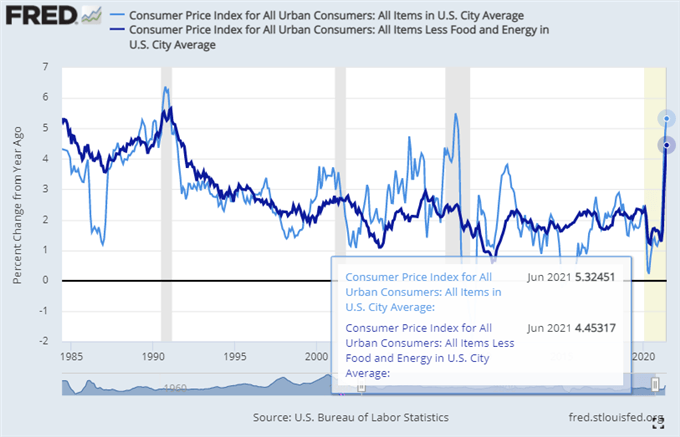 Chart of from FRED Fed Economic Database with Data from BLS

While I don’t believe the Fed is yet at the point to be bullied into rate hikes, I do believe we have crossed the threshold of starting the ball rolling on acclimating the markets to forthcoming normalization. This is an important difference in action but it is also a clever tool to urge complacency from a faux dovishness. Looking to Fed Funds futures, the implied forecast for rate hikes from the central bank through the end of 2022 has jumped to 23.5 basis points (near certainty of one hike) where it had dropped to 15.5 basis points at the end of next week. I think that is a reasonable expectation under current conditions and given the FOMC’s own SEP. That said, the real starting pistol is the announcement for the start of taper (a reduction in regular asset purchases). The path forward towards normalizing was always: forward guidance then taper start then taper end followed by rate hikes and perhaps eventually balance sheet sales. Even SF Fed President Mary Daly said this past session that it was time to discuss taper, but she made a point to say a hike is far off. That is likely true; but for a forward looking market that has found deep confidence and complacency in central bank support, the taper is a crucial event. 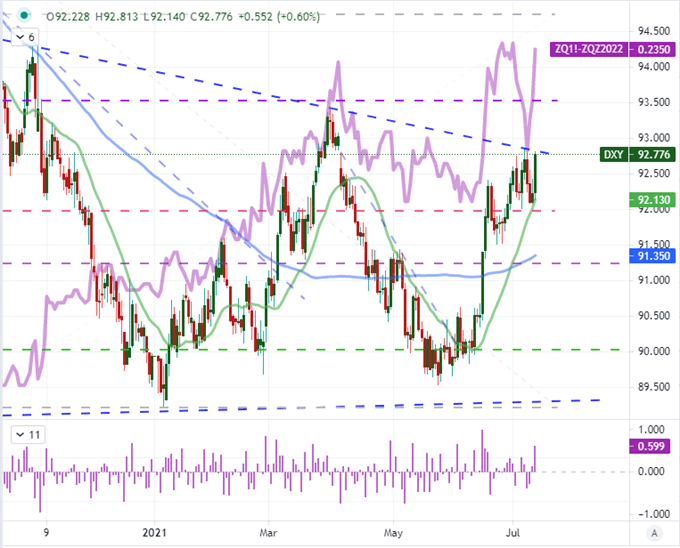 When it comes to the weight of Fed policy on the global risk picture, there really isn’t a contender that could single-handedly draw greater attention. That said, the collective of global policy is far more important than just the US course. The fact that US inflation is so elevated will throw the worldwide spectrum into deeper contrast. Over the past months, we have seen a measurable shift towards normalizing (easing up from extreme dovish positions) from the Bank of Canada and Reserve Bank of Australia. Further, the European Central Bank, Bank of England and even the Bank of Japan have cautiously voiced rhetoric that registers as trial balloons. Should the world’s largest safety net start rolling up all at once, it will be difficult for the speculative rank to miss the implications. So, while I believe there is plenty of market moving potential from relative perspectives like USDJPY (Fed vs BOJ forecasts), the implications for the otherwise corpulent market is far more extraordinary. 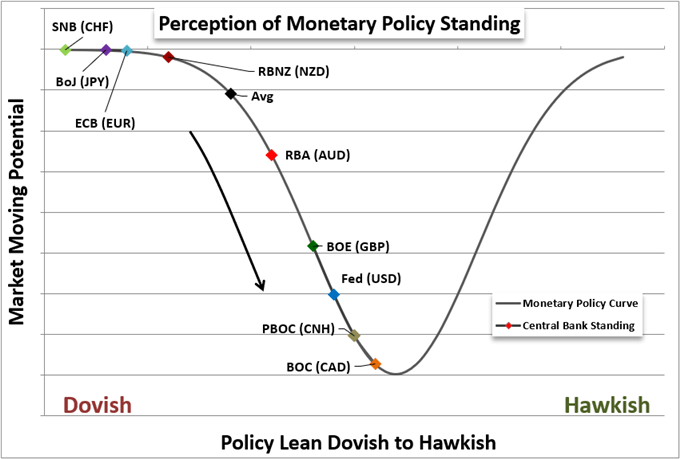 What to Watch Wednesday and Into Thursday

Looking ahead to this coming session, there is quite a bit on tap to threaten volatility. While I am certainly monitoring influences like the continuation of the US earnings season (Back of America, BlackRock, Citi and Wells Fargo are on tap) and Chinese 2Q GDP due early Thursday Asian hours, I think the attention already garnered after the CPI release projects the greatest capacity for momentum. While there are a number of central banks due to announce their policy mix today, the US isn’t done in the limelight. On the data side, the upstream inflation measures (PPI) are due before the New York open. Alternatively, the scheduled testimony by Fed Chairman Powell to the House of Representatives on the US economy is a very timely event to pressure the central banker on what will be done about the risk of inflation with demands for assurances. Whether Powell folds to the pressure or manages to soothe, it could be a well-timed motivation for EURUSD attempting to break the bottom of a multi-month wedge. 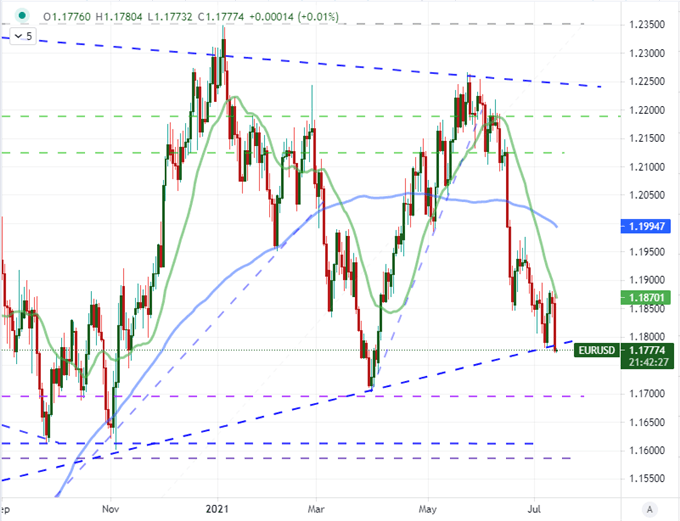 Outside of the US monetary policy orbit, there are three actual rate decisions to absorb today. The first in the Asian session is the Reserve Bank of New Zealand (RBNZ). While this group has maintained a very accommodative stance throughout the pandemic period, the overheated housing market and increasingly broader economy are starting to push speculation of normalizing for this historically carry-positioned benchmark. The Bank of Canada (BOC) is perhaps the most potent of the major central banks considering that the group has already tapered and there has been speculation of a further move ever since. If they decide to further reduce asset purchases now, it could seriously impact the Canadian Dollar and even USDCAD pulling back to long-term support at 1.2000. The event I’m most interest in, however, is the Turkish Central Bank rate decision. This is not an event that will readily spill over to global expectations, but it is absolutely a loaded emerging market event. The country’s president replaced the head of the bank back in March owing to their disagreement on the correct policy approach. Despite Erdogan’s belief that rates should be cut, the newly headed central bank has yet to act. Perhaps because USDTRY is staged at record highs already. 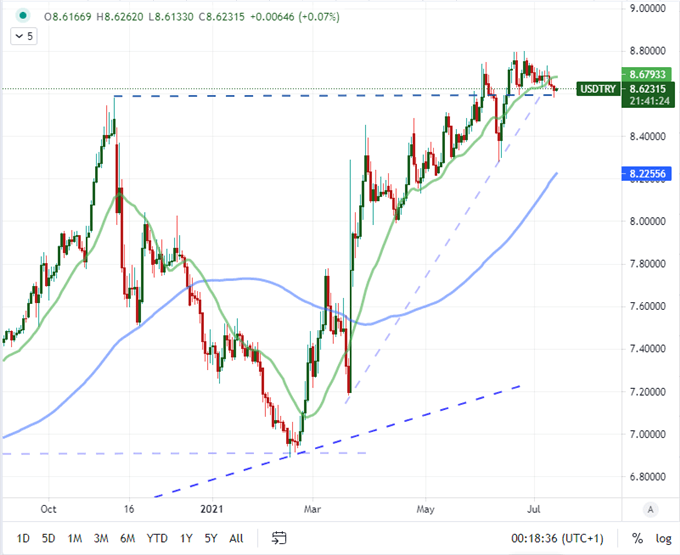