We have closed out the month of June and in turn the first half of 2021. For the S&P 500, this draws a signpost to one of the most remarkable recoveries – from a dramatic collapse into bear market – since World War II. Yet, the big picture context does little to shake us free from the liquidity restraints we have struggled under this past week. While the broad US index closed at a fresh record high for the fifth consecutive trading session, the activity level behind the course setting remains extremely reserved. The past two-day range on a historical basis is the smallest band of price action (as a percentage of spot) since December 2019 – and before that there is nothing comparable until the extreme quiet of 2017. The same historical benchmark exists for the six-day average true range (ATR) as a measure of realized volatility. I’ll reiterate that this is extremely quiet to the point of being improbable that we can maintain it for much longer. A break from these extraordinary levels even before the NFPs hits is a reasonable probability. However, a ‘break’ doesn’t have to be large when the context is this constrained. 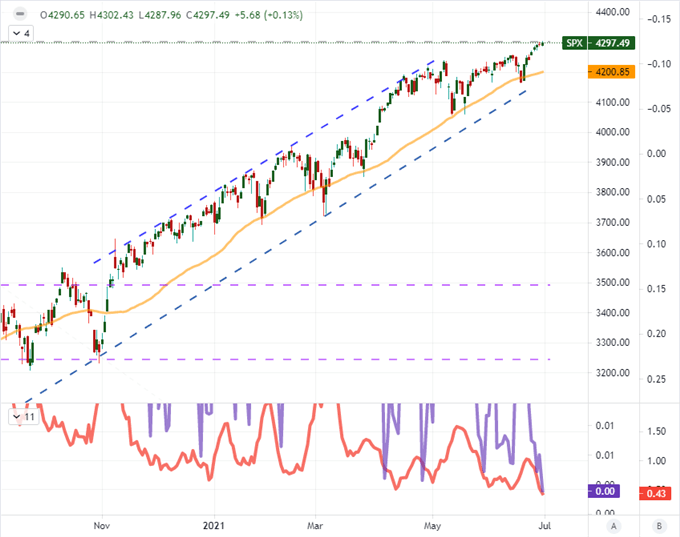 As we pass through the lull in activity exacerbated by anticipation for NFPs and an extended holiday weekend in the United States, it is important to recount the performance of a benchmark like the S&P 500 over a higher time frame. On a monthly basis, the index only advanced 2.2 percent overall – though that was enough to earn the record high. However, on a quarterly basis (three-month rolling period), the picture is far more extraordinary. The 8.2 percent advance through the second quarter is impressive but the overall 66 percent rally from the close of the first quarter 2020 (a five quarter advance) is the fastest such advance since the second quarter of 1936. The comparisons are meaningful. The bull trend we are seeing still unfold today is a recovery from a sharp, forced economic lockdown during the global coronavirus outbreak. The last comparable move happened during World War II. For each, the scale of the climb was proportional to the collapse that preceded it. The tipping point is whether recovery turns into full-scale developing trend. 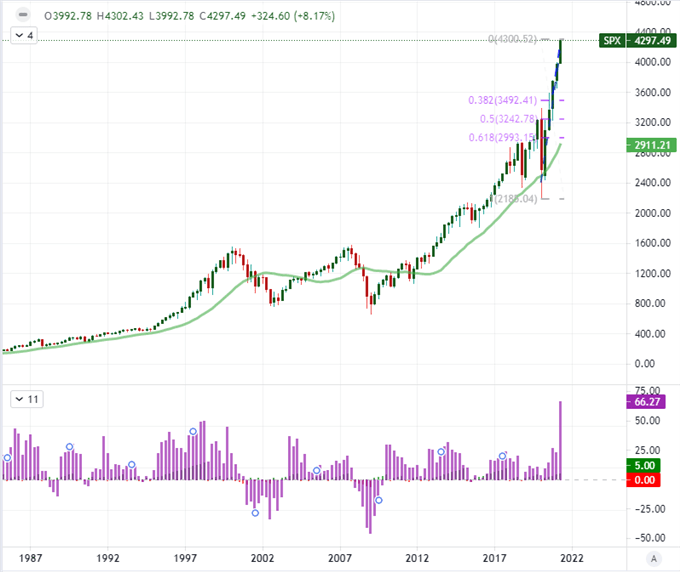 While month and quarter-end activities generated some short-term volatility this past session, there is event risk that presents greater potential for moving the markets. Yet, the capacity for that impact is limited by general market conditions. This past session, the US private payrolls report for June from ADP beat expectations with a 692,000-report that outpaced the 600,000 forecasted. The Dollar was generally leaning higher Wednesday, so perhaps this data contributed to the tail wind. That said, I believe the weight it would add was likely modest at best. Recent history has seen the ADP’s initial monthly report fall far short of the official NFPs update these past two months. That raises some serious skepticism around what the implications for the official payrolls will be on Friday (currently forecasted at a 700,000 increase).

Chart of ADP and NFP Payrolls Change with Difference (Monthly) 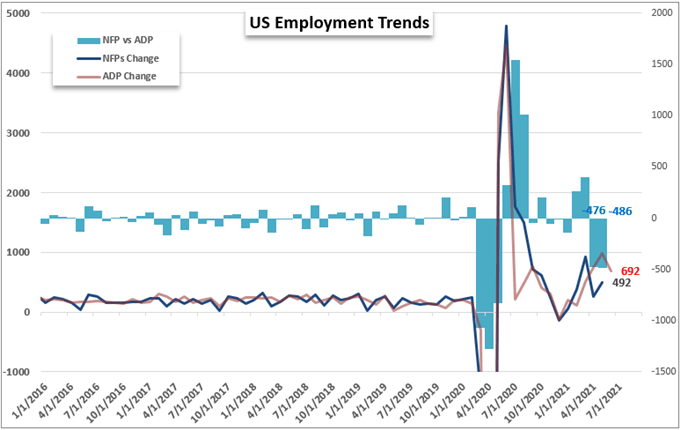 Chart Created by John Kicklighter with Data from ADP

Before we get to Friday’s fireworks, there is one more high-profile scheduled event on the US docket that fundamental watchers should monitor. I consider the service sector (‘non-manufacturing’) activity report from ISM the best overall proxy for US GDP, but the manufacturing figure nevertheless factors into economic health and inflation expectations through upstream price pressures. For sheer market impact, I will read the indicator as a gauge of pressure for the Federal Reserve to move up its hawkish shift in policy settings or otherwise give them breathing room to delay. Generally speaking, a strong reading would be a boon to the Dollar and burden to risk assets as it could add to a more proximate taper announcement. 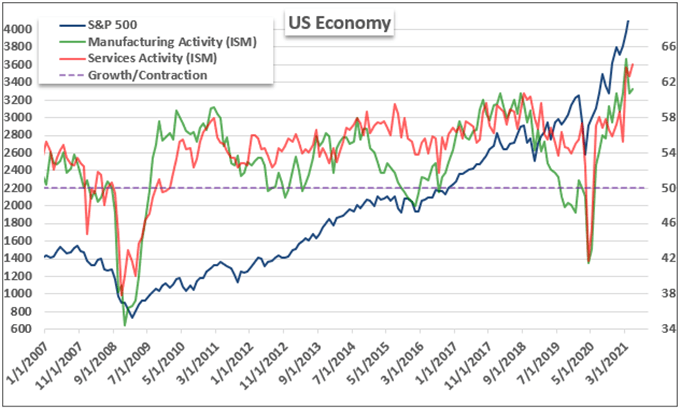 Whether you consider the fundamental behind the Dollar’s advance convincing or not, there is little denying the appealing technical position some of the majors find themselves. There are few charts more loaded than the AUDUSD’s daily or weekly picture. After the FOMC rate decision back on June 16th, this pair crashed through the 200-day moving average and neckline of a head-and-shoulders pattern that had been setting up throughout 2021. Follow through, however, would not show up after the break; and the rebound tests the bounds of what qualifies as ‘former support as new resistance’. Even though the exact level did not hold, I think there is enough progress for market participants to hold onto. That said, extending this slide productively before the week ends seems particularly improbable with this liquidity. 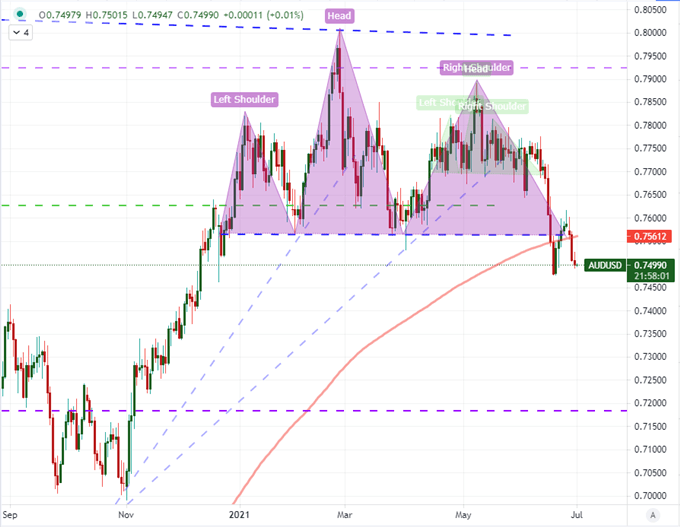 Contrast AUDUSD to USDJPY. There happens to be a loaded technical picture here as well with the range high of 111.00 representing a Fibonacci level (38.2 percent of June to December 2016 rally) but there isn’t much depth beyond this point. Even is full liquidity conditions, the presence of technical overhead at regularly intervals ever hundred pips or so over the past five years would make a clean run difficult to achieve. Market depth amid seasonal constraints included, and range looks the more practical backdrop. That said, with further modest Dollar or ‘risk’ volatility, a short-term break is possible; but follow through is likely to dry up quickly. 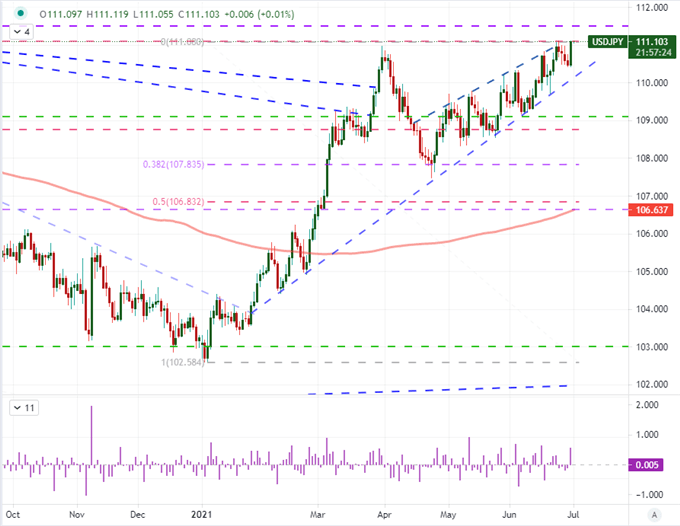 When we consider the Dollar’s performance, we often think of pairs like EURUSD; but the principal benchmark for pricing globally is also an important factor in commodity pricing. Therefore, it should come as little surprise that while the DXY Dollar Index posted its best month’s rally through June (2.8 percent) since November 2016, Gold would put in for its worst month’s loss (-7.1 percent) in the same period. Looking beyond our current extreme liquidity drain, as market yields and interest rate forecasts continue to rise in the US and globally; this anti-fiat commodity will look increasingly expensive. 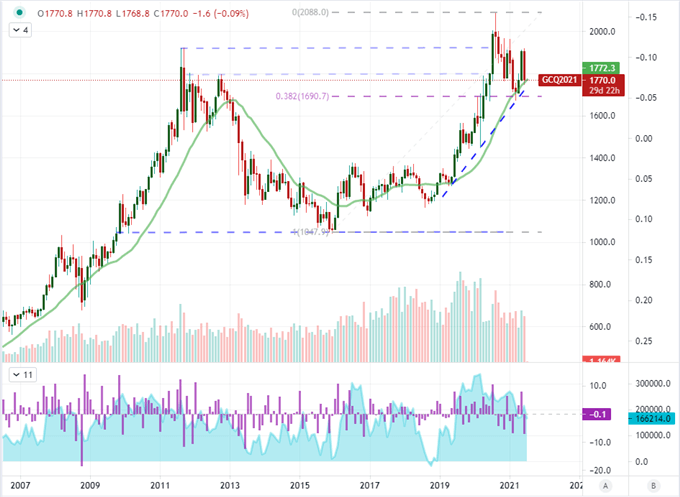