With the US equity indices leading a speculative charge while much of Europe and Asia was still on holiday Monday, it seemed like we were positioning for an easy extension rally this past session as liquidity filled out. Instead, the momentum that carried the S&P 500 beyond 4,000 on Thursday and on to its impressive extension Monday all but vanished with the crowds returning. That reticence was even more remarkable considering that the top fundamental even through the session was the IMF’s updated global growth forecasts which pushed the outlook for the United States’ and world economies to three decade highs water marks. Nevertheless, the SPX followed up a 1.4 percent charge with the smallest daily range (as a percentage of spot) since February 9th – for the sixth most inactive day in the past 13 months of trading. Not exactly a roaring endorsement for the kind of conviction that would fuel serious trends. 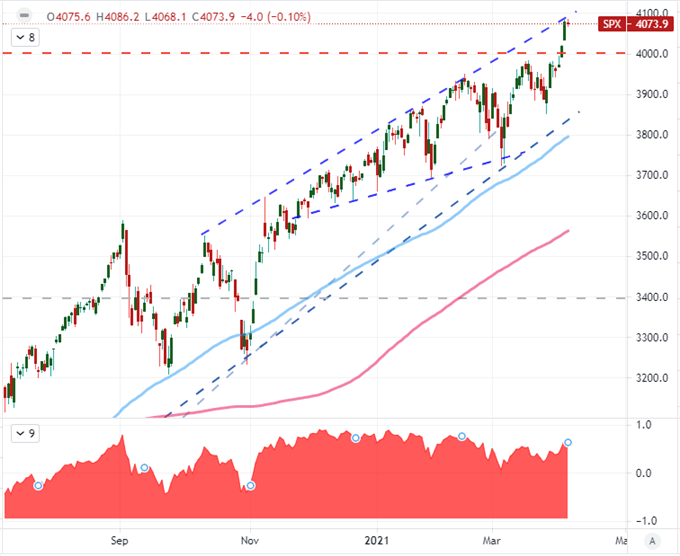 Perhaps with so many other regions’ markets coming back online, the speculative intentions shifted to other areas of the system to bid the relatively discounted benchmarks that were shuttered for an additional two trading days. There were a few measures that enjoyed a significant rally like the German DAX 30 which gapped to a record high and the UK’s FTSE 100 as it forced a technical break on an extended congestion pattern. More broadly however, global indices did not uniformly ‘catch up’ to the US markets. Emerging markets measures (EEM), growth and risk commodities (crude oil) and junk bonds were struggling for direction. Treasury yields (TBT) and carry trade (USDJPY) were in actual retreat. I’ll be watching to see if capital markets will shake off the reticence in Wednesday trade, but this missed opportunity certainly raises concern around the intentions of speculative participants. 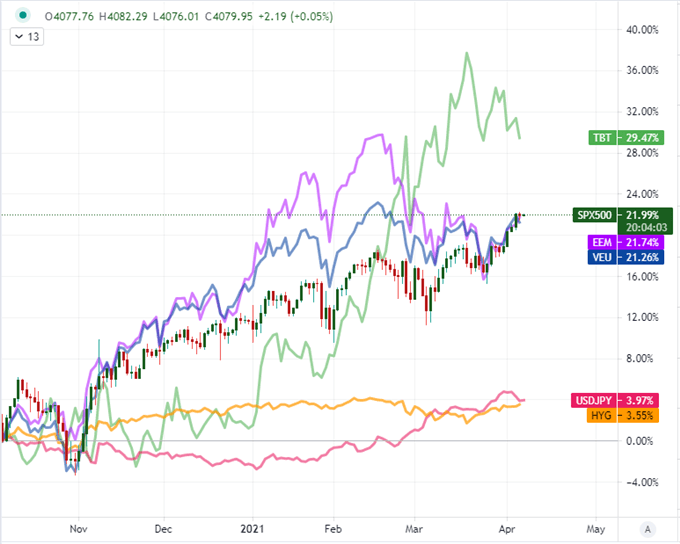 The Other IMF Report That Reflects on Concern

While the headlining fundamental update this past session was the IMF’s World Economic Outlook (WEO), there was a speculative warning from the group in the notes for its Global Financial Stability Report (GFSR). Though they seemed to expect capital markets and equities continue their climb owing to generous fiscal/monetary accommodation and a fast economic recovery, the group noted the stock market seemed “meaningfully” rich relative to fundamentals and there was concern over the “excessive risk taking”. We have been monitoring a number of these issues across the market. The GameStop and WallStreetBets phenomenon has led to a surge in retail accounts while a new report from CreditCard.com showed Gen Z respondents were five times more likely to find financial advice in social media than those 40 and above. Meanwhile, the SPAC explosion continues apace with the Topps sports card company supposedly looking at a $1.3 billion deal. Then there are the cracks like ViacomCBS and Discovery selloffs post-Archegos fire sale refusing to recovery while Credit Suisse and Nomura who funded the manager see their own shares suffering for the losses. 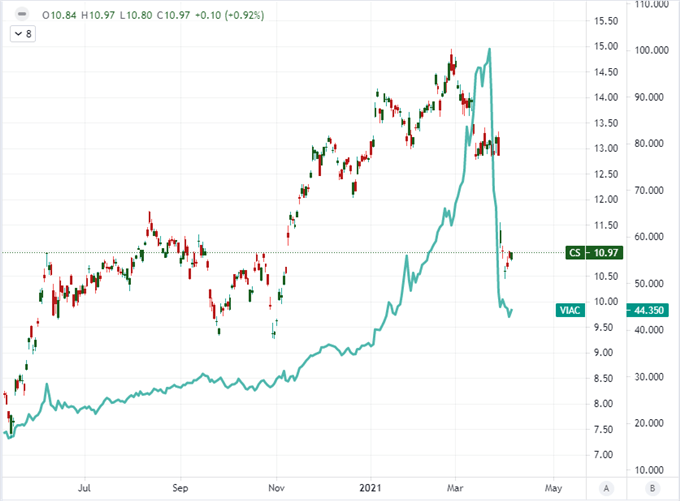 On the Positive Side: Growth

Despite the over-indulgence in risk trends and the warnings that never seem to leave us, the economic outlook from the supranational group was nothing short of incredible. The global outlook for growth in 2021 jumped another 0.5 percentage points from the January upgrade to a full 6.0 percent. That would be the fastest expansion since 1980. Digging a little into the figures, the United States’ pace jumped an incredible 1.3 percentage points to 6.4 percent (fastest since 1984) thanks to the Covid stimulus package and vaccination rollout. Most of the major economies followed the lead of the world’s largest player – though very few enjoyed that degree of upgrade. 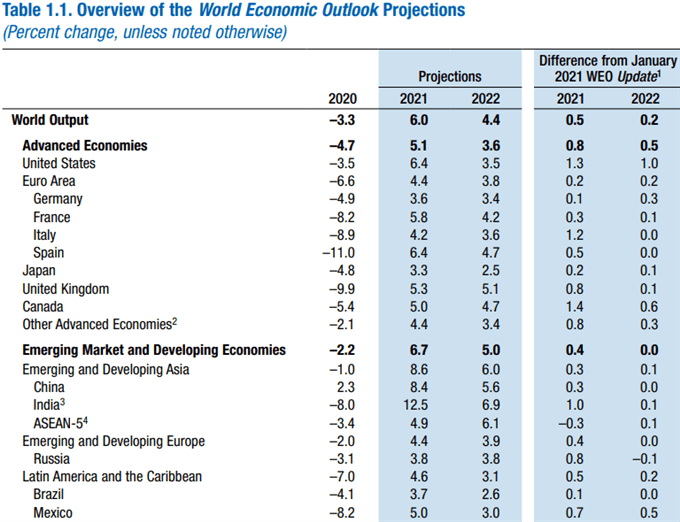 There are two ways to consider the upgrade in global growth forecasts. The first and most obvious adjustment with this news would be to assume a further charge in risk appetite trends. That didn’t seem to happen however as the US indices stagnated and other measures were mixed. Another perspective is the relative advantage established in the different pacing. Consider the US versus the Euro-area where the vaccination efforts have headed in very different directions. A 0.7 percentage point growth advantage to the former would seemingly support the Dollar via a EURUSD slide. And yet, the pair instead extended its rally with a significant jump. That is totally askew though as the 10-year US to German government bond yield spread has similarly maintained a slow consolidation turn. 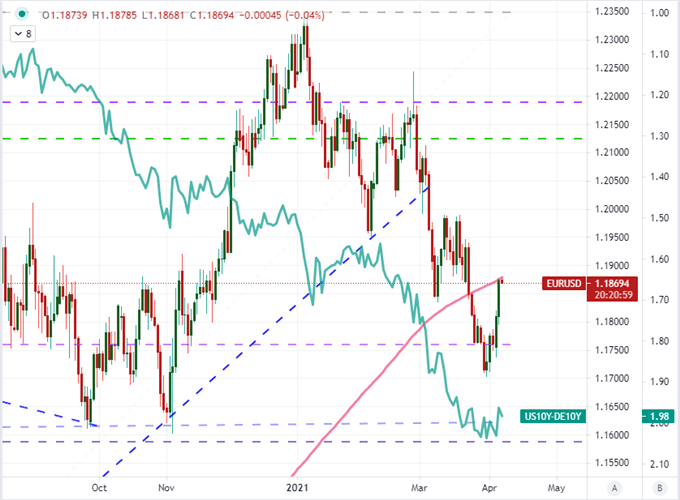 The Dollar Continues to See its Potential Fade Relative to Fundamentals

I don’t think the Dollar is playing out a battered safe haven role – or at least it would not likely last as there is little premium to the currency on that front. If that is true, the Greenback’s retreat out of neglect or skepticism would likely require a more proactive motivation to carry a meaningful bear trend forward. One aspect that could contribute to the slide – it very likely is a factor for USDJPY – would be a further retreat in Fed rate forecasts. Fed Fund futures projected as much as 24 basis points of tightening through December 2022 as of Monday which slipped to 19.5 bps this past session. That said, an economy running hot is not likely to give the Fed much leeway to ignore the building pressure. 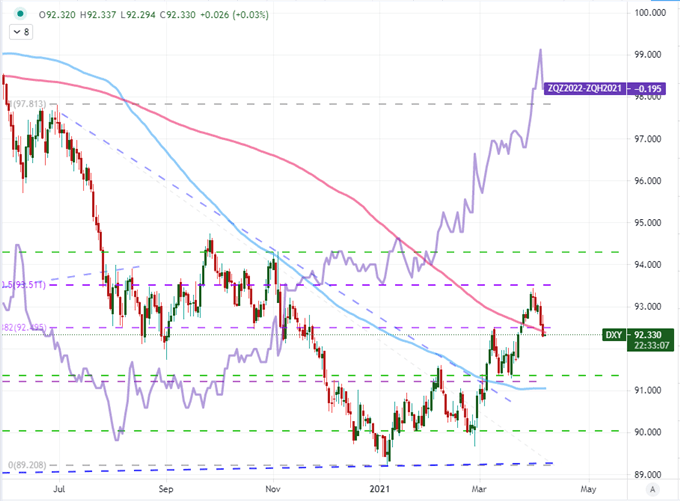 Since the topic is growth, underwhelming risk trends and a Dollar struggle; it is worth leaving off with a look at gold. The precious metal is a central point for all of those fundamental factors and it seemed to play the role well this past session. The Monday break through 1,725 seemed to solidify itself this past session; but I would be looking for 1,760 to give way if there is to be conviction. For that to happen, I would expect to either see yields continue to tumble or risk aversion to take a nasty turn for the worse – and even then, a revived Dollar appeal could make for an uneven bid for the commodity. 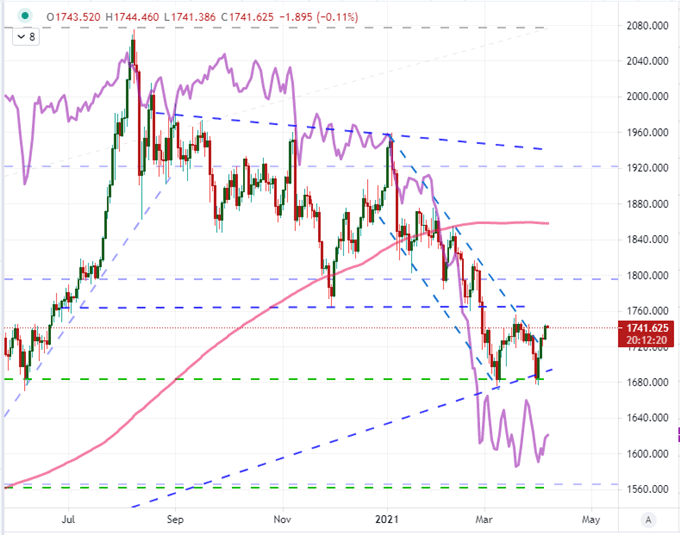