A Quick Fire Break to an Ominous Risk Aversion Signal

Despite the otherwise broad and severe drop in ‘risk assets’ witnessed Wednesday in the markets, there was a notable fire gap to show up this past session not surprisingly during the heaviest run of event risk for the week. After a heavily contested, record US GDP release and sound quarterly beat from the bulk of FAANG stocks afterhours, fostering a bear trend while the world awaits the outcome of next Tuesday’s US Presidential election seems a particularly improbable scenario. Then again, I wouldn’t write off the crowd’s susceptibility to a groundswell in fear even with attention anchored to the near future event. Nevertheless, the markets I refer to for a global baseline in risk trends broadly bounced this past session. The Dow’s breach of trendline support and its 100-day moving average on way to a technical ‘correction’ was followed by a 0.5 percent rebound this past session. For this counter-trend move, however, the S&P 500 was more remarkable given it hadn’t reached the ‘10-percent off highs’ mark and has some moderate support to still work with. That said, the tech-fueled Nasdaq 100 will be my focus to close out the week following the earnings charge in the afterhours. 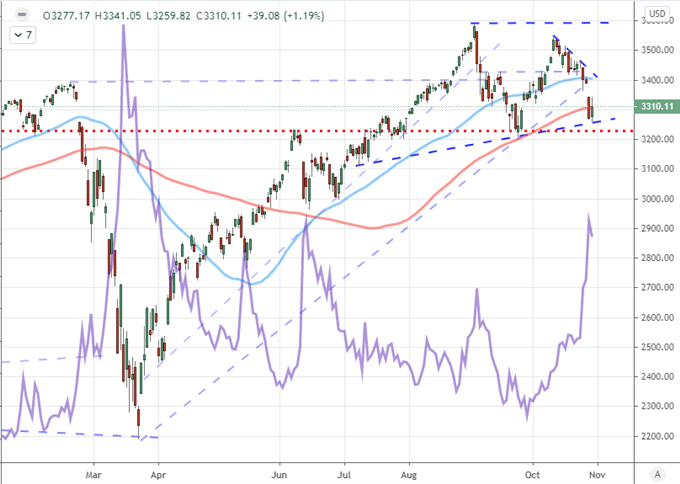 Referring to the poll I conducted in the middle of the mid-week slump, traders’ take on whether markets were committing to an earnest bear trend, flirting with a temporary pullback or ultimately beholden to next week’s election outcome was a remarkably balanced split. Technically-speaking, the ‘buy the dip’ mentality edged out, which is not a surprise given it has been the default mentality for the past decade. Nevertheless, insecurity is clearly gaining a foothold. The weight of the forthcoming US Presidential election on speculative intent should not be discounted. Anticipation for such a weighty event can dowse a bearish speculative run as readily as a bullish scenario. However, I maintain that ‘fear’ is a more contagious sentiment than ‘greed’. 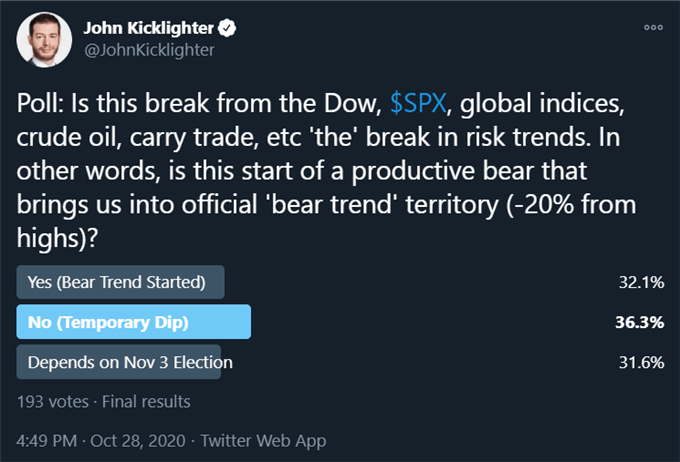 Where to Look for the Last Cue for Sentiment this Week

For the final session of the trading week, my assessment for risk appetite will be set firmly on the tech-laden Nasdaq 100. While there are plenty of measures to pick up the mantel of investor confidence from broad Asian to European and North American equity indices, emerging market assets, growth-influenced commodities and carry trade among other measures; the NDX was supplied a tangible springboard with the afterhours release of critical tech companies’ earnings reports. Collectively, the market caps for Apple, Amazon, Google and Facebook represent more than half of the index’s size. As a speculative milestone, the tech sector has paced the US equities market which has in turn outstripped the performance of global shares. And, stocks have represented the top performer among the major assets that I monitor this past decade. With that influence in mind, it is worth noting that all four beat their respective forecasts – most by a large margin – yet all but Google were trading lower afterhours despite the showing. This alone may not be enough to rekindle the fire so close to the election, but it certainly raises the risk.

‘Relative’ strength or weakness can gain greater traction over systemic sentiment when expectations act as a moderating force. The Dollar was a good example of this potential through the past session. While I have held open the potential for the Greenback via the possibility of an overdue stimulus refresh these past weeks, the US growth update Thursday – even with a questionable context – could serve as a contrast to global counterparts. Further, the benchmark currency can readily transition to its safe haven status amid any sudden slumps in global investor confidence. The Dollar is by means biased to a bullish course in all scenarios, but it does have some favorable traits in these times of volatility. 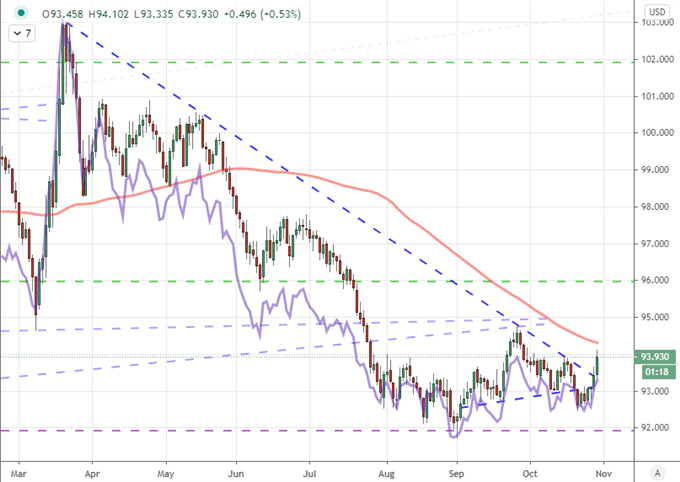 Through the final session of this trading week, the anticipation of the US election next week will remain a driving fundamental force for the global markets. Anticipation for a major event risk can be just as influential as a substantial outcome. That said, the state of the world’s economic recovery is a factor that may very well outlast and outstrip such a contentious event as deciding the next leader of the world’s largest economy. The 3Q GDP release from the US Thursday managed to beat an already-extraordinary forecast. The 33.1 percent growth over the period was the largest such increase on record. President Trump seized on the figure and its appealing historical reference as a campaign footing, but the context left much to be desired. The historical growth followed a comparable slump in the preceding quarter (-31.4 percent), which left the economy still off its 1Q 2020 standing. Furthermore, the outlook for economic potential – for the US and globally – over the coming final months of 2020 and beyond is burdened by a resurgence in the pandemic, a lack of stimulus from the US and more. 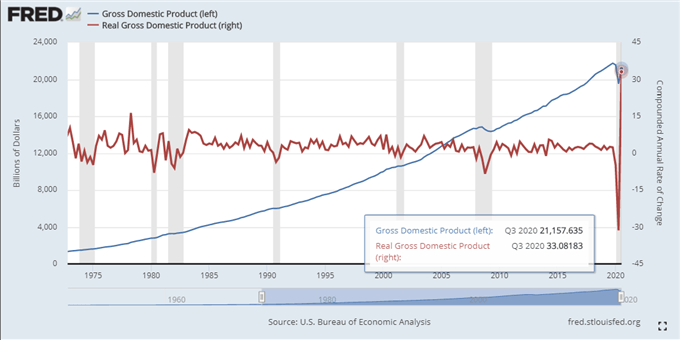 As troubled as the outlook for economic activity may be overall, there is still differentiation that can be drawn out of relative performance. Today, we are due 3Q GDP readings for Europe – the Eurozone, Germany, France, Italy and Spain. If this economic powerhouse similarly live up to its healthy forecasts for rebound, the contrast to the US could provide critical differentiation for speculative impact. EURUSD took a dive this past session in party due to the Dollar, but the benchmark currency’s performance was notably more restrained among its other crosses. The Euro’s own struggles seemed to exert even greater influence over the pair. The announcement of lockdowns in Germany and France as coronavirus cases surge to new records across many Eurozone countries represents an immediate discount to enthusiasm for remarkable readings on dated economic updates. I think it is worth looking at a EURUSD chart on a higher scale (weekly or monthly) to see the speculative standing in this influential cross. 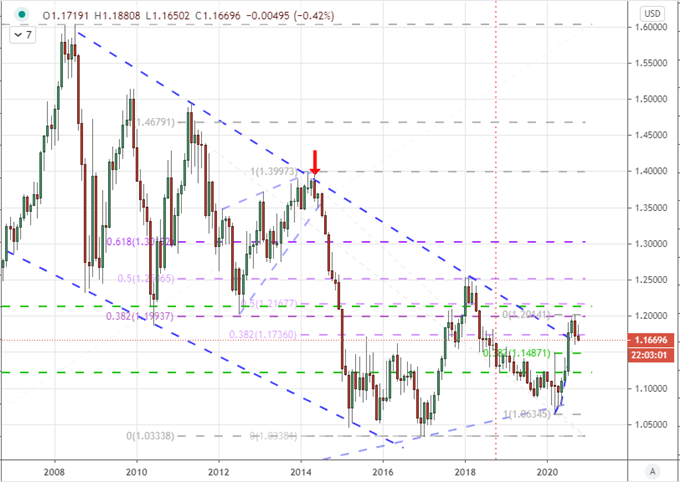