We are a week out from the US Presidential election – one of the most prominent events on the docket not just for the US markets, but the global financial system at large. The concern over how heavy an impact this event can have on markets keenly aware of the world’s largest economy’s pull on the entire system is only matched by the ambiguity as to what course the heavily contested poll is expected to eventually take. This kind of concern represents a serious curb on conviction, whether it take a bullish or bearish course. Nevertheless, we started this week off with a test of traders’ anxiety. ‘Risk aversion’ was on ready display from equities to emerging markets to more traditional growth assets (like crude oil or 10-year Treasury yields). Progress from the most sensitive measure on list, the S&P 500, tested the anesthetizing influence of anticipation with a close below a frequent technical figure at 3,430 and the 50-day moving average at 3,410. Was that ‘the break’ that would tip traders’ confidence? 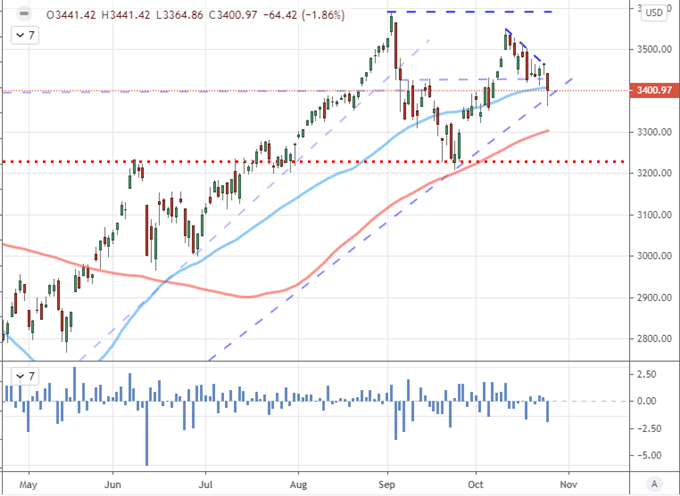 I remain skeptical that markets have the wherewithal to commit to a clear trend in speculative conviction. However, anything is possible, and risk aversion has more potential in a turn for timely commitment given the sway that fear has herd mentality. Taking a look at how concern can manifest in markets, below we are presented the ‘volatility of volatility’ measure in the VVIX. When expectations of volatility – which has an inverse correlation to the S&P 500 – is tame, it suggests the markets are going to hold to a holding pattern. That said, the index’s rise above 120 raises the threat assessment for those watching such measures. 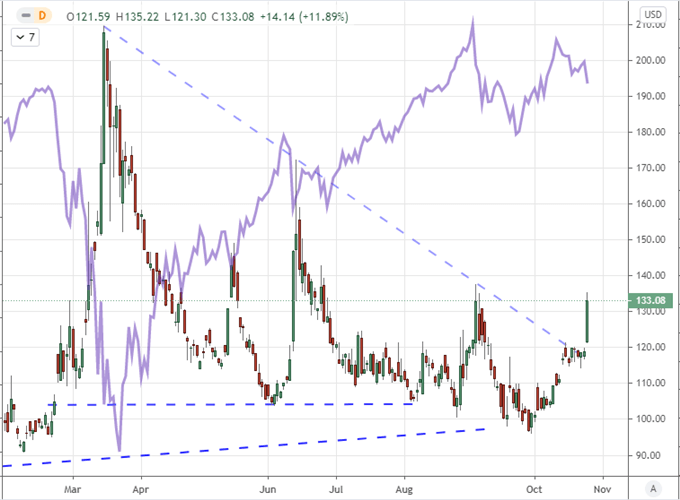 Even though the S&P 500 has slipped, the VVIX is on the rise and a range of ‘risk-leaning’ benchmarks have shown unease with the speculative backdrop; it remains a high threshold in my mind to charge the market to a significant move before next week’s top event. That said, the relative impact this event can cater to may still represent better opportunity for traction before the actual outcome is known. Reflection on the comparative nature of the FX market, the poll below shows a remarkable discrepancy between the expected outcome of the vote (almost exactly 50/50 between Biden and Trump) and the subsequent response from the US Dollar. With such a balanced split, perhaps one of the other major themes can gain a foothold… 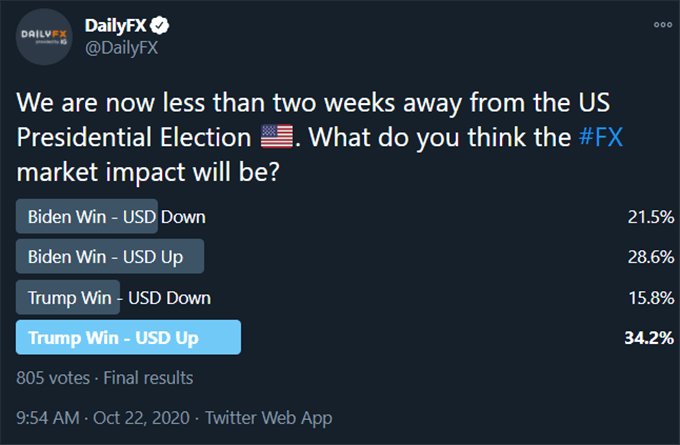 A latent potential bullish catalyst for enthusiasts that are worried that a decade worth of climb is once again at risk, the discussion around the next run of US stimulus remains an appreciable point of contention. It was suggested heading into this past weekend by the White House Chief of Staff that the negotiation parties trying to iron out a replacement to the CARES Act could hash out the much-needed infusion into the uncertain outlook for the world’s largest economy. After weeks of false starts and warnings that an election timeline for such economic manna were improbable, it perhaps wasn’t too much of a shock this past session to see that a compromise was not met. 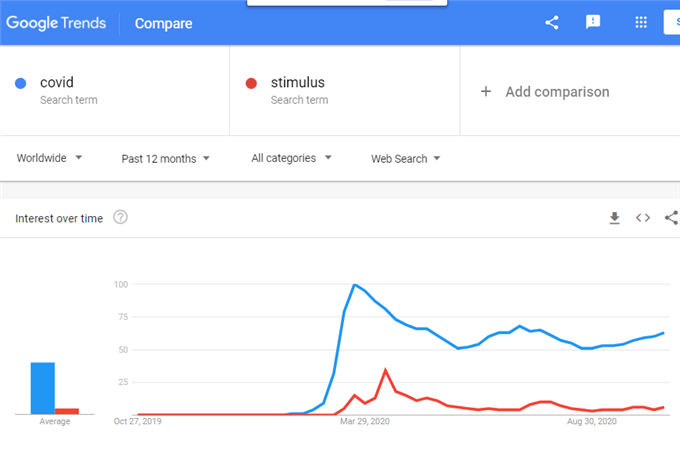 Graph and Data from Google Trends

Yet, even though a further delay on stimulus wasn’t necessarily a surprise, the urgency for that external support is not static. The need for an artificial support for a struggling economy continues to grow as the outlook darkens in response to a rise in the pandemic numbers. We were met with record case numbers for the novel Coronavirus for both the United States and worldwide over the past weekend. These are troubling statistics that bode poorly for the stability of investor sentiment – much less the public health – but there remains a key ‘relative’ aspect to this scourge. As the numbers rise, recognition for which countries take a more lenient response to curb the spread may be viewed as having a near-term economic advantage as they stretch productivity. That said, if the burden continues to grow; either the market (consumers, businesses, investors) will move to cut even if the government hesitates to do so. 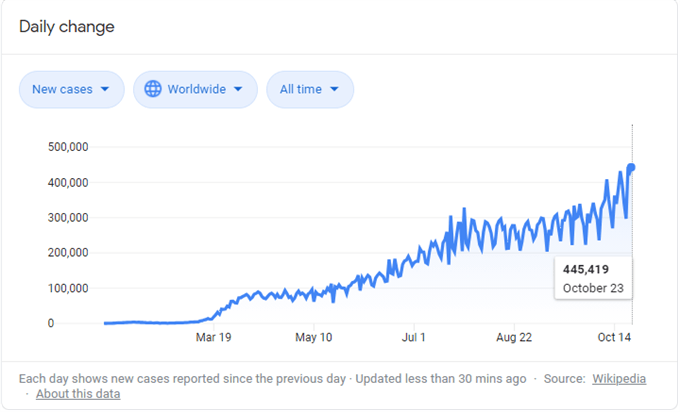 When it comes to comparing the virus spread as a comparative study, there are few more pressing contrasts than what we see between the United States and Europe. Both regions are generally recording record numbers of positive infections, but the response has deviated significantly. Eventually, if unchecked, this juxtaposition will drive more and more market response. In the meantime, other forces are at play that may ultimately compound this existing course. Earnings is one such factor this week. I am generally skeptical of the favorable picture derived from ‘better than expected’ corporate reporting and the general malleable nature of GAAP (standard accounting in the US), but it has managed to keep its head above the proverbial water. If Microsoft manages to keep a positive slant on its reflection after the close today or the FAANG members in Thursday afterhours, it would represent quite the contrast to Germany’s top software company, SAP, which drop -23 percent Monday when it abandoned its medium-term profitability targets owing largely to Covid uncertainties. 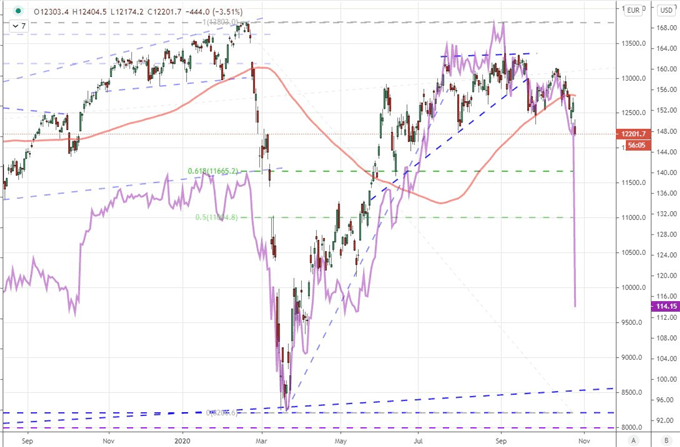 Ultimately, earnings is an upstream contribution to a more systemic matter: growth. In these heavy fundamental seas, it is important to recollect that we are waiting for the 3Q GDP readings form the US and Eurozone on Thursday and Friday respectively. Despite the moderately dated aspect of these figures, the recognition of their heft remains a key factor. Yet, through it all, I would also point out that there is a notable positive correlation (20-day rolling coefficient) between the EURUSD and S&P 500 these past six months. Will this hold? 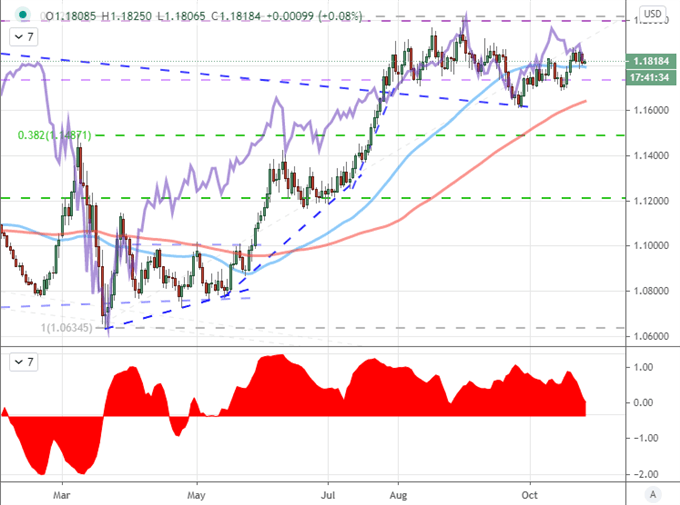