Dow Unmoved by Fed Hold, GBPUSD at Cross of BOE Decision and US GDP

If you were looking for a significant change in policy from the world largest central bank – the Federal Reserve – Wednesday afternoon’s policy announcement was surprising. However, looking to Fed Fund futures, overnight swaps, the Dollar and US indices; the generally steady course was the prevailing expectation. The central bank kept its benchmark rate range between 1.50 and 1.75 percent – a significant premium to its European and Japanese counterparts as much as that is worth at such historically low levels. As far as anticipation for what the central bank would do through the rest of the year, the accompanying statement suggested that the economy was moving towards its inflation target while the optimism around consumer spending seemed to cool modestly. Without a black-and-white SEP (summary of economic projections), there as little to truly offer foothold. That said, Fed Funds futures continued to price in a 79 percent probability of at least a 25 basis point rate cut by the end of the year according to the CME’s own Fed Watch page. 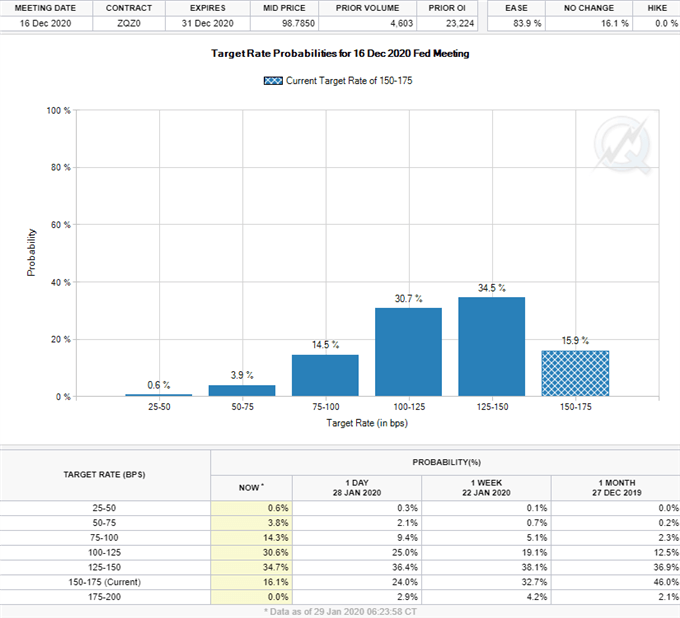 Chart from the CME Fedwatch Tool on its Website

The outlook for the Fed from the perspective of the central bank and that of the market remain remarkably divergent. I think this discrepancy is likely to persist through the foreseeable future. The Fed, like the rest of the major central banks, have established themselves as crucial foundation to financial system over the years first providing massive infusions of liquidity to arrest the worst financial crisis since the Great Depression and then continuing to raise that support in an attempt to amplify growth. The pace of growth in the US and globally strayed very far from the tempo set out by the central banks, but there was a very notable response from capital markets soothed by their efforts. It is not clear how much dependency is placed on the help provided by these key players, but the risks seem to be less esoteric among market observers every day. That raises the risk of recognition to changes in the backdrop that could be construed as a threat in the economic or financial backdrop. The Fed’s 0.1 percent increase in the rate charged on excess reserves and announced plans to maintain short-term lending activity through at least April can certainly be read as recognition of risks. 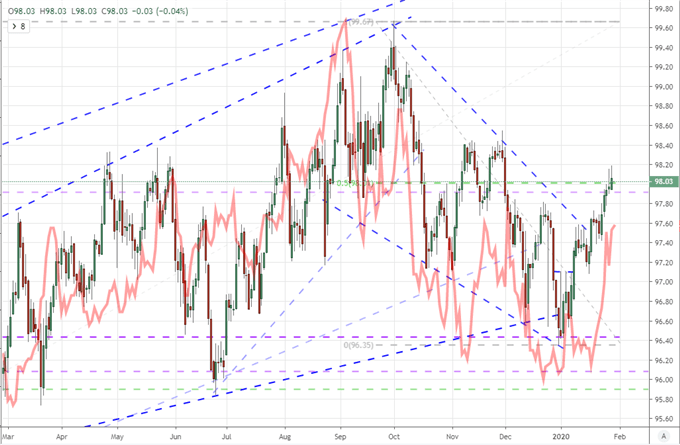 Monetary policy is not done as a market-moving theme just because the Fed has come and gone. This past session, the Australian fourth quarter consumer inflation (CPI) figure crossed the wires with a modest uptick, though the Australian Dollar wouldn’t provide any outsize response. For the upcoming Bank of England rate decision, overnight swaps as recently as yesterday were showing a 50 percent probability that the group would cut the benchmark rate by 25 basis points. That means that half the market expects a change of some sort while the other half do not. Regardless of the outcome, a significant portion of the market (at least of the swaps market) will be surprised by the outcome. The question is whether that surprise will prove materially market moving for the likes of GBPUSD and others. 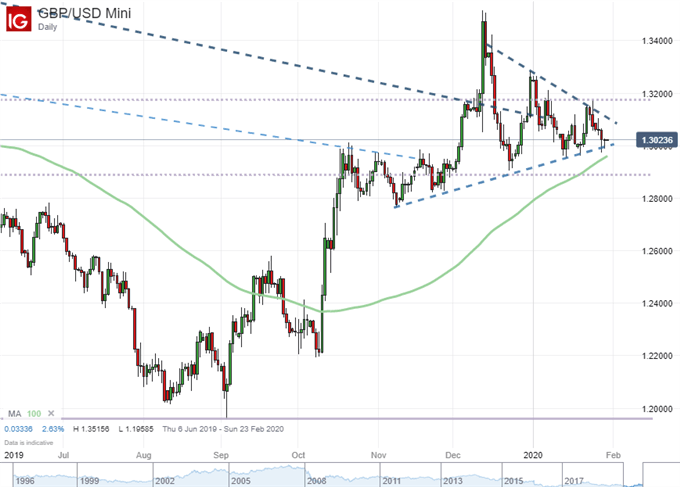 While not holding the convenience of a scheduled update, market participants should remain vigilant when it comes to the risks associated to the spread of the coronavirus. The number of cases internationally continued to grow through this past session, a number of travel companies have responded by curbing transportation through China and the Chinese government has extended the holiday to help quell the possible spread of the virus. Those are tangible economic/financial effects that will eventually show up in the numbers. These influences can be relatively small all things considered, but sentiment remains the potential amplifier. If fear returns, broad risk trends could be moved; but the interim influence on more closely-related assets like FXI or USDCNH should be monitored with a more weathered eye. 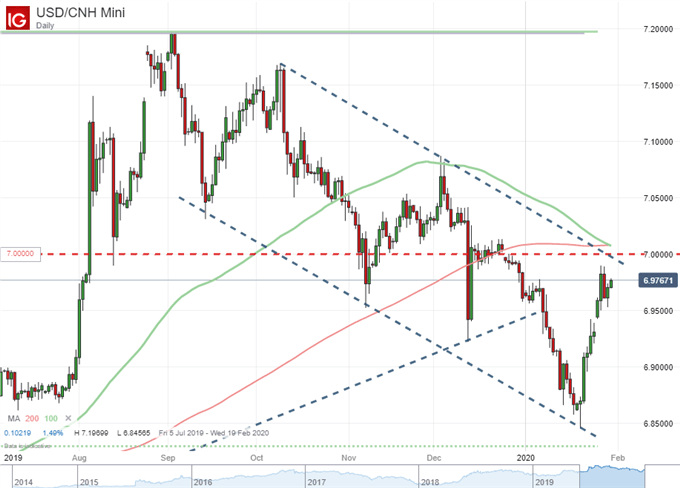 If there is one particularly high-profile theme on tap for Thursday’s trading session, it would be growth. On that particular front, we have seen the fears over the virus spread cut not just into speculative conviction but growth forecasts as well. That can be evaluated through the performance of US Treasury yield curves and key commodities. In fact, the 10-year to 3-month yield curve is hovering just above zero – an inversion loosely construed as a recession signal for many. The August surge in ‘recession’ searches via google and subsequent risk aversion seemed to align to this particular event. That sets the stage for the US 4Q GDP release on tap for Thursday morning (New York hours). If this indicator disappoints, it may do more than trouble the Dollar and US indices. It could add a sense of risk aversion far and wide. 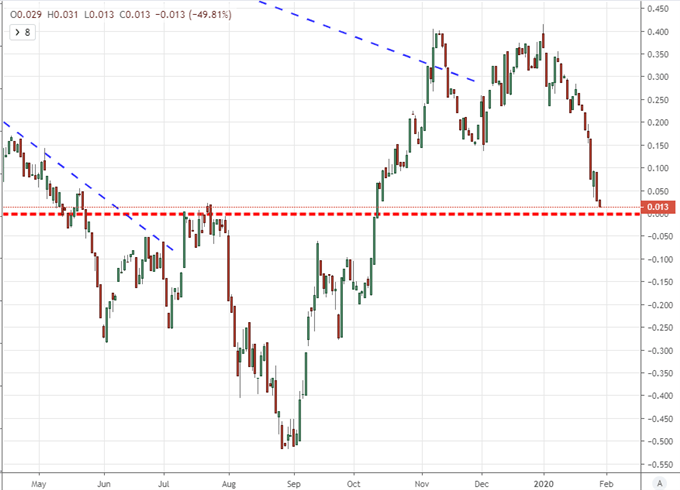 If we are looking at the US GDP update as a volatility event, there is particular potency for a pair like GBPUSD owing to the confluence of the BOE decision impact. However, if we want to keep to the same theme, a different currency pair should be considered: USDMXN. Mexico is also anticipated to release its own 4Q GDP figures Thursday. This pair is less frequently followed relative to the most liquid majors (EURUSD, GBPUSD, USDJPY), but it is one of the more popular emerging market pairs. Be mindful of its volatility. 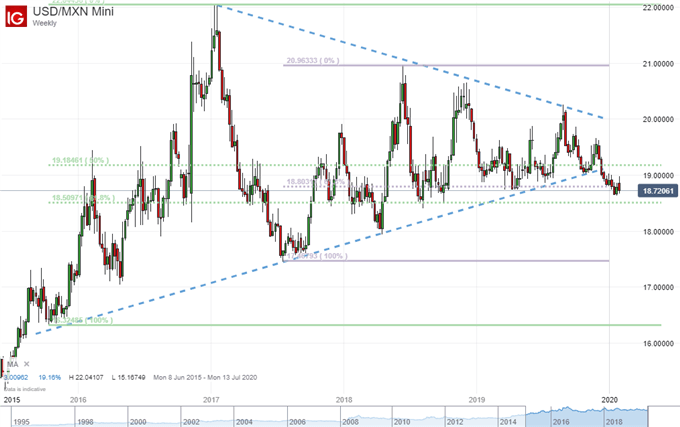