With the US markets back online after its extended holiday weekend passed, the speculative rank was ready to take the temperature of risk trends. This past week ended with a general bearing of optimism as US indices pushed record highs and the US-China Phase One still providing a baseline for optimism – even if it was struggling to project the windfall of enthusiasm that some bulls were expecting. It was therefore no doubt disappointing for those content to ride momentum whether built on complacency or tangible fundamental improvement when risk aversion was easing back this past session. The retreat was broadly based whether looking at equities, carry trade, government bond yields, emerging markets, high yield or most other asset types I refer to in this category. Within indices, there was a particular underperformance to be noted in the US ‘blue chip’ Dow index which seemed to suffer for the heavy weighting afforded to Boeing which advised lower for the grounding of its controversial 737 line. 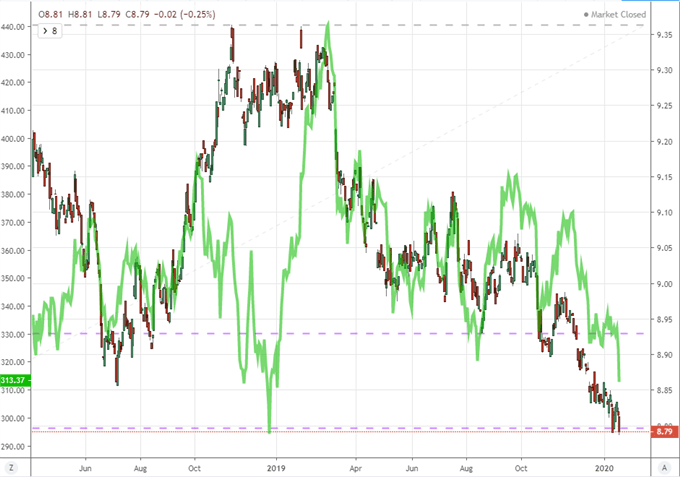 Boeing is a meaningful lynchpin for the global balance as it is one of the largest companies in the United States and it also serves as a flashpoint in the trade issues between the US and EU. However, its troubles are not likely a lasting global charge. On the other hand, the sharp drop in the EEM Emerging Market ETF, tumble from the Hang Seng Index and drop for the Chinese Yuan (USDCNH advance) are more likely a reflection on fundamental concern with greater reach. While there are questions over the terms of China buying US goods and Hong Kong has been dealt a credit downgrade amid its protests, this more recent move seems to have been instigated by the growing concerns around the Coronavirus that seems to have originated in China. References to the economic and financial implications of the SARS outbreak in 2003 have been made fairly frequently in the media. This is an abstract influence, so market participants should be vigilant and tread carefully. 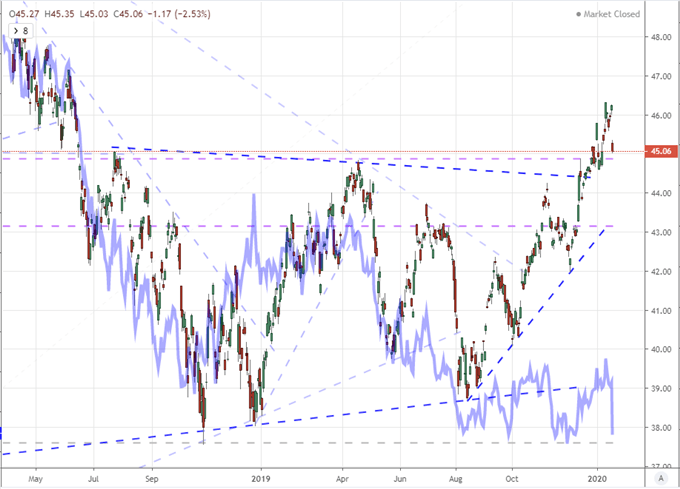 Growth Finds Its Cheerleaders Trying to Play Down Data

On more familiar fundamental shores, the views of standard trade war battles seemed to either hold steady or improve. For the US-China, even though there are reasonable points of skepticism – such as the feasibility of seeing a Phase 2 deal – it is a matter that doesn’t exactly find a pressing sentiment resolution for the time being. On the other hand, there was a notable development in the rising threat of a US-EU full engagement. The United States and France set a deadline for January 21st to resolve the issues of the digital tax the latter country placed on large tech companies otherwise the US would move forward with $2.4 billion in retaliatory tariffs. According to officials, the US and French Presidents agreed to a détente Sunday evening to head off escalation. This could have been worth a relief rally, but according to EURUSD, there didn’t seem to be any concern that things would go wrong to begin with. Don’t forget that the US is still applying $7.5 billion in tariffs for the WTO’s Airbus ruling and waiting for the same group to weigh in on Boeing subsidies. 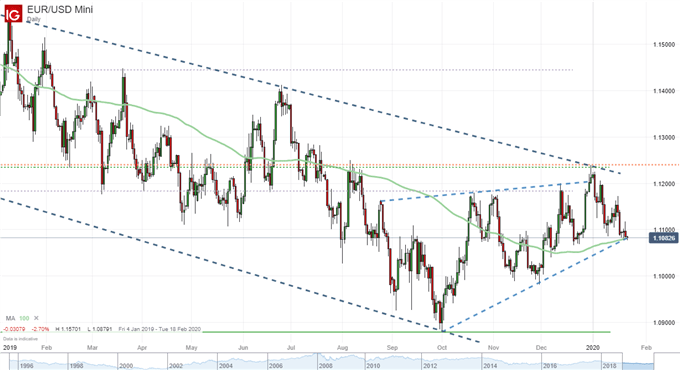 Meanwhile, the downgraded growth forecasts from the IMF Monday didn’t seem to sway the optimists among policy makers. President Trump was in Davos regaling the crowd with the strength of the US economy, calling it a ‘blue collar boom’, but that doesn’t exactly align to decelerating forecast for US expansion (2.3 percent in 2019, 2.0 percent in 2020 and 1.7 percent in 2021). Meanwhile, PwC’s Global CEO survey showed 53 percent (of 1,531 respondents) believed global growth would slow in 2020 with the US participants offering among the most pessimistic view. In the report, trade war fallout still ranked as a top concern. Ahead, we have a few economy-reflecting indicators including Korea’s 4Q GDP, UK CBI business optimism and the US Chicago Fed National Activity Index. These are all appetizers to Friday’s global January PMIs. 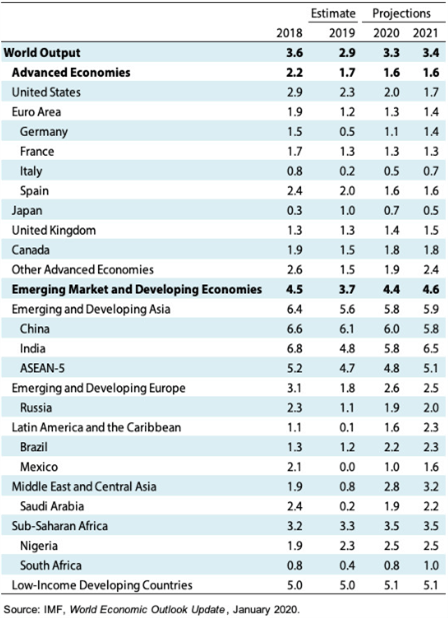 Another theme was massaged this past session, though it didn’t exactly turn the dial up on global volatility. The Bank of Japan (BOJ) managed to walk the line of no surprises in the update to its monetary policy mix – a remarkable feat given that it maintains one of the most aggressive easing policies of the major central banks. It kept its benchmark rate at -0.10 percent and continues to target stimulus such that the 10-year JGB yield holds around zero. What was updated was the outlook for growth. Based on the Phase 1 deal and the government’s approximately $120 billion stimulus program, their forecast was raised from 0.7 to 0.9 percent. What I found remarkable was the assessment that there were no signs of extreme bullishness in the markets. That seems self-indulgent given the prevalence of stimulus, the reach of capital markets and the relative struggle in economic activity. 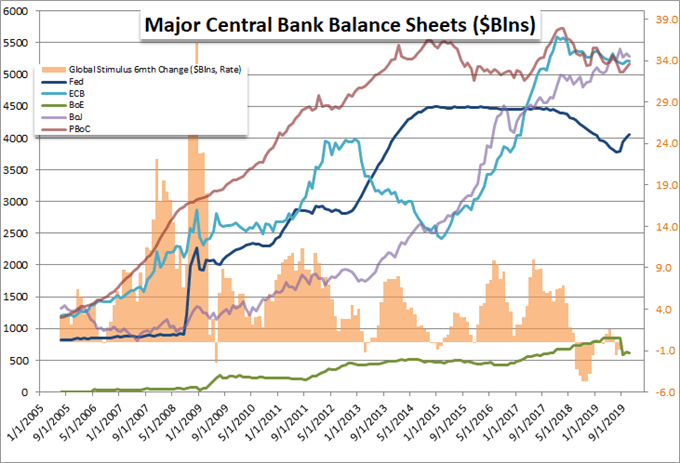 In the upcoming session, we are due a central bank update that is open to more surprise. That isn’t to say that the Bank of Canada (BOC) will likely deviate from the expected status quo, but there is far more probability that they do shift focus and greater sensitivity to nuance. Should this group decide to take a more dovish or hawkish view of the future, the market may be responsive enough to shift the Canadian Dollar’s bearings. This may not show up as readily for a pair like USDCAD or CADJPY which is competing with higher-level themes like risk trends. Instead, the likes of NZDCAD could focus the interest. And, lest we forget, there is also an ECB rate decision due Thursday which could offer insight on the very framework of the group’s approach moving forward.

Sign up to watch the BOC decision live with an analyst!
Cross-Market Weekly Outlook
Register for webinar
Join now
Webinar has ended 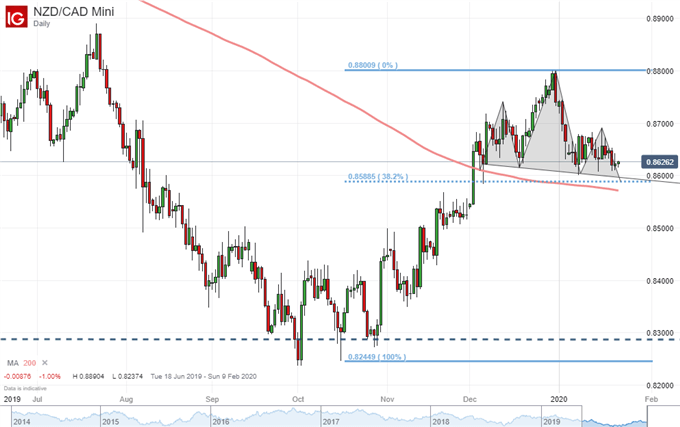