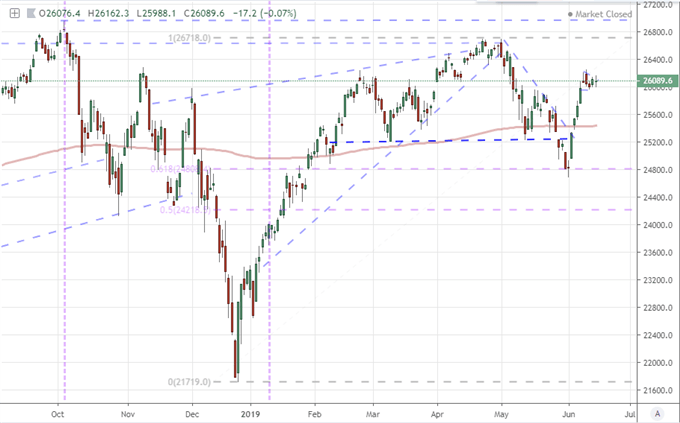 A Timely Dollar Rally That Taps Into Growth Relief

For the favored measures of risk appetite, this past week offered an unmistakable loss of traction in an otherwise encouraging recovery effort mounted at the start of June. While most of the speculative benchmarks were slow to follow from more deelpy discounted levels compounded over the past year, the Dow and S&P 500 rode the wave early and attempted to extend the run to record highs. With the loss of momentum this past week, there is little chance enthusiasm will simply sweep over the market once again. Our fate is now in the hands of high-level themes, some of which that aren't tracked out for definitive updates (like trade wars) and others (such as monetary policy) which are focused on a single, overriding event. While there is considerable turbulence to be found in geopolitical uncertainties, trade wars and the trajectory of economic activity; the Fed rate decision on Wednesday is the unmistakable beacon of potential in the week ahead. While a key event for the Dollar, the implications for growth and need to hold back the pressure in trade wars will make for an event with far more reach.

As we closed out this past week, there was a sense of calm-before-the-storm for many of the traditional 'risk' assets. The exception was the US Dollar and those assets that carry a direct inference to its pricing capacity. While the Greenback was just as distracted by the event risk in the week ahead, the anxiety of anticipation wound the market up enough that a fundamental cross current could trigger a move that essentially fell into the category of 'following the path of least resistance'. The DXY opened the trading week at cusp of reversal on a 12-month rising trendline (and just above the 200-day moving average) while the EURUSD had technically made its break above channel resistance (though it too was still yielding to its own 200-day moving average). With a high bar to mounting true conviction, it was natural for the currency to flag similar to how the Dow had. Yet, that tempered lean turned into outright recovery through Friday. 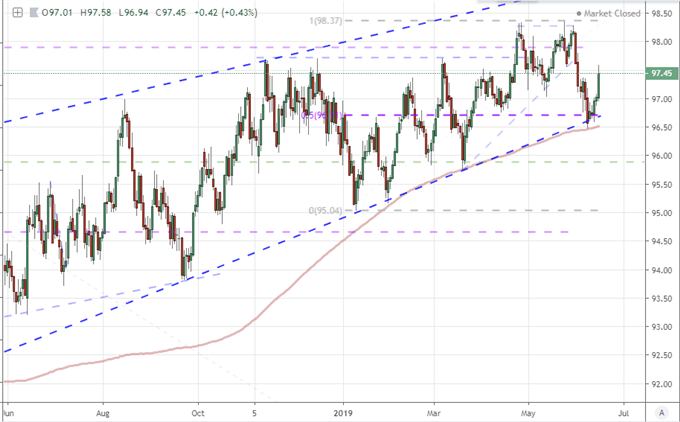 The spark on Friday to pull the Dollar back comfortably into its well-worn range were a few coinciding cues that spoke to relief to a slowly but consistently eroding outlook for growth. Through week's end, the US May retail sales perked up confidence significantly when it was reported that purchases rose 0.5 percent for the month (both with and without autos), but the real surprise was the revision higher for April. What was previously registered as a -0.2 percent contraction - a reading that translated into fears that the US economy was visibly stalling - as revised up to 0.3 percent expansion. That offered enough optimism to offset the concern around the University of Michigan's consumer confidence survey printing a slide (97.9 following 100.0) - though the jump in the Atlanta Fed 2Q GDP forecast (2.1 versus 1.4 percent) and New York Fed's forecast (1.4 versus 1.0 percent) certainly helped the cause. Now, in the middle of its range, the price of conviction and technical progress is once again substantially higher. 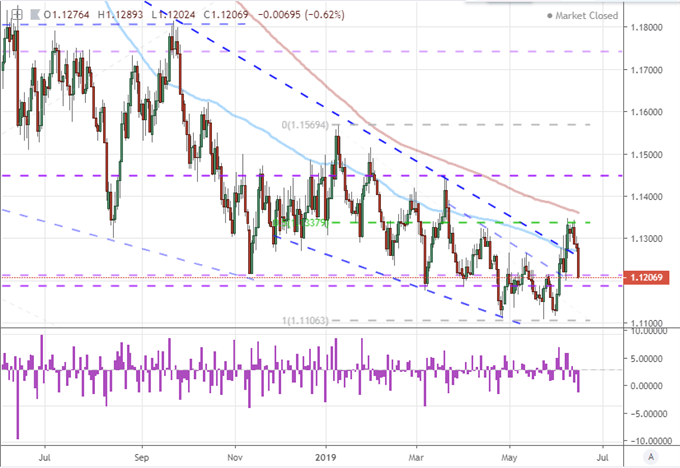 Looking out over the new trading week, there is good reason to suspect that we will face all of the major themes that we have been dealing with regularly as of late. Despite what the US sales figures and regional Fed GDP assessments may have offered this past week, there is serious restraint on the outlook for growth in the global economy and its largest individual member. The most direct measure of economic tempo ahead is Friday's run of June PMIs (Japan, Australia, Eurozone and the US). The most often cited, top threat to economic activity moving forward, trade wars, will be just as prominent in the rounds of speculation. This past week, President Trump increased confusion over the state of negotiations with China and Mexico. In turn, 600-plus companies from retail, technology and other key sectors signed a letter to the White House, calling on Administration to resovle the trade war as the pain was starting to set in for the US economy. To reinforce that point on Friday, Broadcom cut its revenue outlook by $2 billion due to 'geopolitical uncertainties' and the loss of business by its largest customer - Huawei which was infamously banned last month. 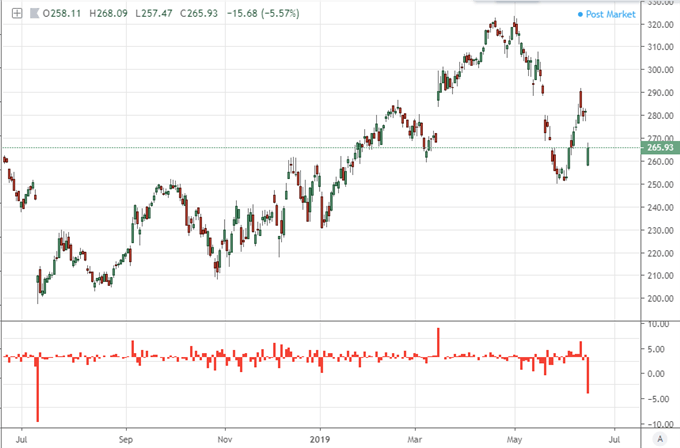 The global economy is unmistakably slowing, external pressures from protectionism are increasing and competitive policies are starting to raise the specter of serious volatility. Investor, economist and President are increasingly turning to the Federal Reserve to put out the fires. Unfortunately, it is impossible to live up to all of the demands. Wednesday's FOMC (Federal Open Market Committee) decision is the most appropriate opportunity to offer a critical update on the intention for support because the markets both need the reassurance and this will be one of the 'quarterly' events in which the group will announce rates, Chairman Powell will offer insight and answer questions, and the forecasts will be updated. At this point, the market has fully priced in at least two rate cuts from through group through year's end and there is debate over a third. That would be an aggressive reversal from multiple hikes still anticipated for 2019 up until the end of last year. Simply starting a slow path of easing may disappoint the charged risk forecast while matching the expected pace could signal a sense of panic from the key policy group. There is a very high probability of volatility and a troublingly high chance of disappointment. 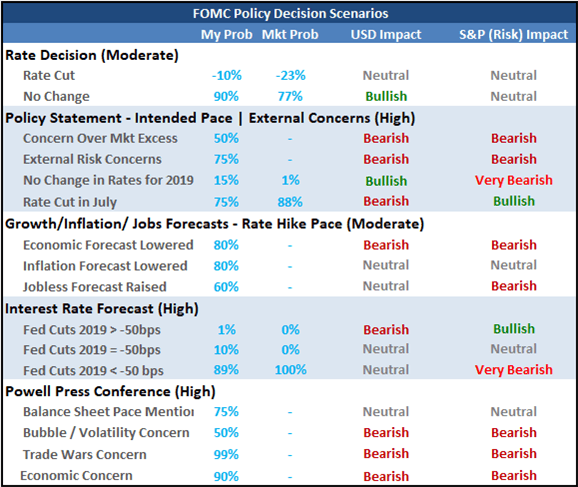 Expect Indirect Blast for the Euro, Gold and Oil

Between the conflicting forces of hope arising from Fed support to the crushing impact from trade wars, the result is a greater uncertainty over the future of economic strength. It is hard to escape from so systemic an influence, and very few markets can reasonable be expected to be exempt from its gravity. If the Dollar is charged, expect the benchmark currency cross EURUSD to transmit a strong impact through the Euro. Beyond just a mirror to the world's most liquid currency, the Euro is also facing uncertainty in the form of financial and monetary policy stability with Union members like Italy threatening to ignore the rules while EU officials are contemplating hefty fines. Add to that the frequent threats by Donald Trump to turn tariffs onto Europe - whether on Germany for Nord Stream 2, retaliation for Airbus subsidies or blanket auto tariffs - and we are left with a constant state of anxiety. There is good reason for the currency to flag, and yet, it has held back the tide. How long? 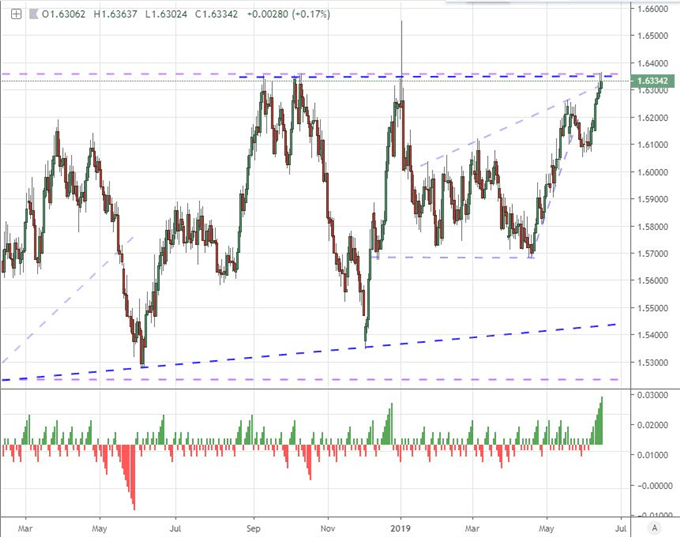 When it comes to the Dollar and economic stability, there is an inevitable stake for gold and crude oil. For the precious metal, the role of safe haven and inflation hedge are distant seconds to the principle role of 'stable alternative to traditional currencies' which is so desperately needed. If the Fed is successful in calming risk-based fears with a substantial swell in its accommodation, the Greenback will drop in value sharply but it is unlikely cause a systemic turn in expectations for underlying growth. That means that the US and other global currencies will feel the pressure of economic struggle and the increasing competitiveness in policy efforts which will unifromly devalue the most liquid stores of wealth. If Dollar, Euro, Pound and Yen are all diving, there is only one non-traditional alternative markets are comfortable to entertain: gold. 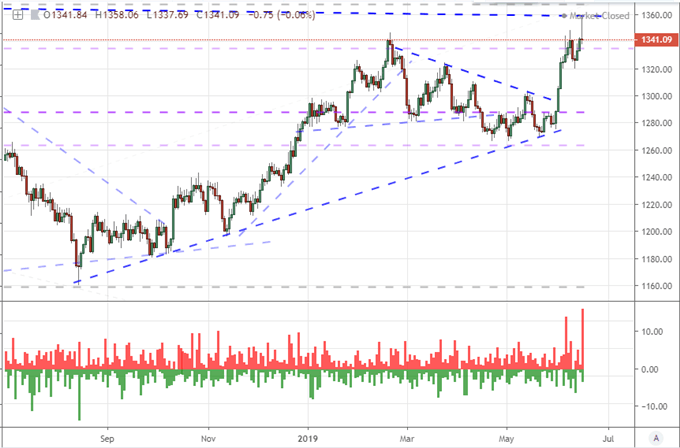 Meanwhile, oil has spent months proving that its focus has shifted away from volatile supply side economics. The sharp drop in OPEC output to five-year lows reported this past month has done little to turn the commodity higher. That is not particularly surprising as we have seen the pace of expansion flag and thereby demand follow in tandem. Growth forecasts and benchmark risk assets like the Dow should be tracked more closely than inventory updates for market movement, but that doesn't mean we should fully ignore headlines like the escalating tension between the US and Iran. We discuss all of this and more in this weekend Trading Video.