The Government Shutdown Tab and Threats of a Spreading Trade War

They may not be providing the market with the immediate course and momentum necessary to provide appealing trends, but we should nevertheless keep close tabs on key fundamental themes. When they do take the reins, it will likely come with little warning and immediate effect; so preparation will pay off. Among the multitude of issues competing for global investors' attention, the US government shutdown moved back into the front of the line for me. The furlough has passed 26 days to extend the record-breaking closure. That is meaningful in itself; but adding to the weight of the situation, the Council of Economic Advisors to the President revised its assessment of the impact the shutdown is having on the US economy. According to its new numbers, each week carves off 0.13 percent points from GDP. Given that we are in our fourth week, that will soon equate to half a percent of GDP cut just in a month. The second most prominent theme lurking out in the deep is trade wars. The US and China direct economic conflict continues to exact its toll on trade figures and sentiment most distinctly. Yet, the trouble for China seems to be coming through more prominently in financial terms. We've already seen a fiscal stimulus on Tuesday and a reserve ratio cut, but Wednesday brought additional relief in an $83 billion equivalent infusion of cash into the system via repos in an effort to avoid a liquidity crunch. And, as a reminder that this is not just an issue that the US and China share, Republican Senator Grassley remarked Wednesday that the President is "inclined" to impose new tariffs on autos. While this may be a broad implementation, make no mistake, it will have the greatest impact on diplomatic relationships and global growth in the impact to the European Union and Japan. As I've said before, if this trade war were to spread in earnest to the largest developed world members, it would more assuredly pull the world into negative GDP.

Another theme of more time-limited influence is US earnings season. Thus far, the fourth quarter numbers have offered a mixed picture much like the previous few seasonal updates with caveats galore. That said, the Goldman Sachs and Bank of America earnings-per-share reports were the kind of beat headline hawks like to see. Skepticism, however, has held over to help curb the impact these numbers would have more broadly outside of their respective tickers. That may change Thursday after the bell as we are due the Netflix (NFLX) figures. This company is one of the coveted FAANG members which over the past four or five years lead the climb in US equities (a leading 'risk' benchmark) and the subsequent retreat. It shares have paced a remarkable rally these past weeks which will add to its clout as a possible short-term Nasdaq and S&P 500 mover. Speaking of those two indices, we have a relationship that highlights the extraordinary pace that technology has enjoyed. Recently, the Nasdaq has regained traction - though it is still high from its record a few months ago - insinuating a rise in sheer speculative appetite rather than targeted value. More broadly, the S&P 500 and Dow have also notably returned to respective levels that represented critical tipping points for the extraordinary drop between October and December. I would argue both see immediate resistance in former head-and-shoulders pattern necklines (and conveniently midpoints to the aforementioned ranges). Many other risk-associated markets (emerging markets, high yield fixed income, sovereign yields, commodities, etc) are at similar hurdles just much lower in their recovery effort. 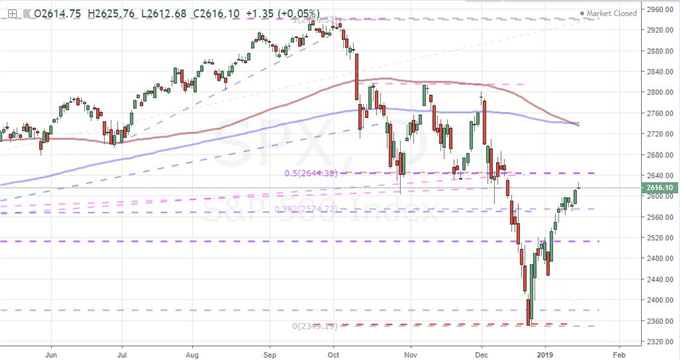 Top scheduled event risk Wednesday would once again go to the British Pound. Following the sound defeat the Prime Minister suffered on her Brexit proposal, Parliament debated a confidence vote for Theresa May's government. The outcome was far closer than the tally for the Brexit plan, but it would ultimately swing in May's favor. This brings us right back to status quo. Recent norms are not particularly favorable for the United Kingdom as they entail uncertainty over whether the country will severe its ties to the European Union totally or perhaps a compromise that could confer benefit to both parties. With 72 days left until the Article 50 period ends (March 29), there are difficult negotiations that need to be had between Prime Minister May and Parliament as well as between May and her EU counterparts. There is still a distribution of reasonable probabilities in this situation - if they change standing in the ranks, it could alter the course for the pound. As it stands, an extension of the Article 50 deadline and soft Brexit compromise remain the most likely course. A no-deal or second referendum are still less likely, but not - worryingly - an impossibility. Expect the Pound to remain landlocked so long as this purgatory persists whether your trading GBPUSD and EURGBP or GBPCHF and GBPAUD. 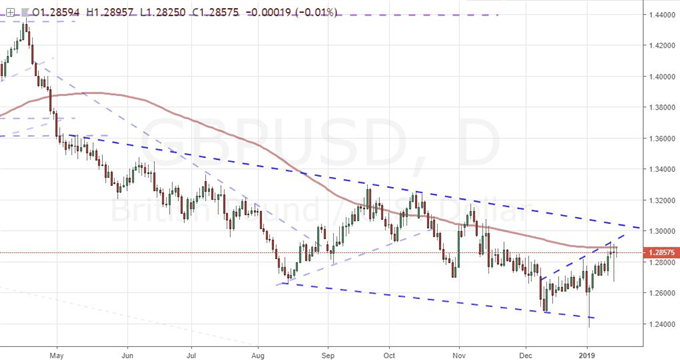 Following fundamental intensity to an outcome for volatility and trade opportunity is not the fruitful journey that it is typically. Perhaps there is better potential to be found in those currencies not beholden to an open ended and high profile fundamental threat. If we are looking for a good example of such a criterion, the Canadian Dollar fits the bill. The docket for the currency is relative clear for the foreseeable future and the technicals are appealing. From an equally-weighted Canadian Dollar index, we have a remarkably clean inverse head-and-shoulders pattern. Given that one of my top criteria for such setups to play out are a strong prevailing trend to reverse, this situation certainly qualifies. That said, to see a bullish break with follow through would still defy the overriding inertia restricting motion across the financial system. Another possible link to motivation may be oil prices. The correlation between the currency and commodity has improved sharply these past months. Speaking of crude, its consolidation the past week is a distinct contrast to the decisive motivation plotted out since October. Will this natural resource be the first natural resource to break tight congestion or will it be gold? In fact, the past five trading days range on gold represents the smallest scope of trade for a similar period going back to November 2001. Notably, both will likely find true motivation through risk trends with a connection to indices; so, everything is ultimately linked. We discuss all of this and more in today's Trading Video. 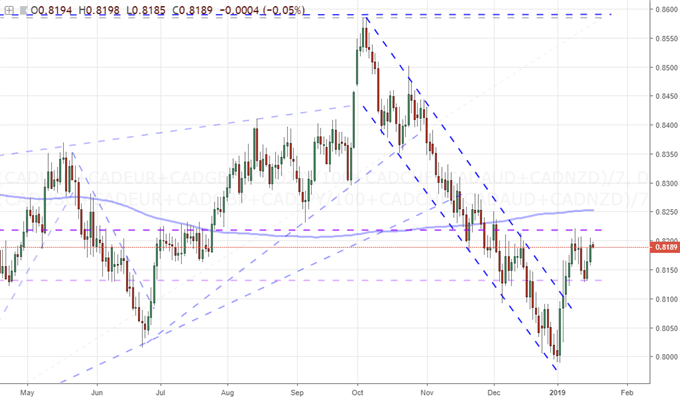