S&P 500, Dollar and Risk Trends Riding into the Eye of an Election Hurricane

Anticipation has Sidelined Attempts to Sustain Recovery or Re-assert Retreat

It was clear from the capital markets to start this week that anticipation has the dominant emotion across the spectrum - whether evaluating according to asset class or market participant type. The S&P 500 offered the perfect technical reflection of this holding pattern in the market with Monday's trading range fitting neatly into the previous sessions (Friday's) extremes. Other benchmarks for sentiment from global equities to emerging markets to carry trade offered up the same general sentiment: hesitation to take a position for fear of volatility and/or even a systemic trend change in the immediate future. The source of distraction is difficult to miss. In reality, there are a plethora of open-ended issues that have simmered for some time (trade wars, a slow normalizing of extreme monetary policy, etc); but the focus at the moment is on something more immediate and somewhat-refreshingly more limited in assessment time. The US mid-term election will begin this upcoming session and the results will start to solidify early Asia trade Wednesday. Already the world's largest economy and financial systemic, this event naturally carries an air of global scope. However, this particular trip to the polls for America is even more an international event given the United States' push to withdrawal from the global community and raise tension with broken trade relationship and pressure like trade wars. Even as the tally is counted, we will not have a clear evaluation of the environment ahead. Be mindful of our environment as markets scramble for conviction after October's tumble. 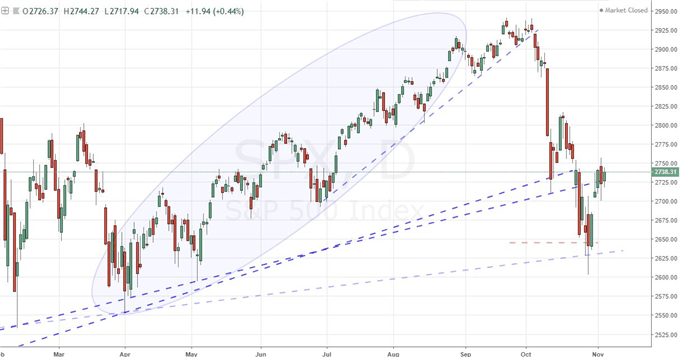 Dollar: When Everything is Important, Nothing Is

For currencies, there is arguably no more exposed a major to the upcoming elections than the US Dollar - though a case could be argued for the Chinese Yuan. For the Greenback, there is certainly a short-term impact in the aftermath of the polling, but more worrying is the long-term implications that are conveniently overlooked until they overwhelm the speculative rank. The challenge in assessing something as electrified as US politics is to discount all the extraneous emotional and social elements behind the event to in turn make a calculated and dispassionate evaluation for how such an abstract event can direct markets in both bearing and tempo. As is always the case, uncertainty is essentially risk itself. This event carries an abundance of uncertainty, but even the scenarios behind clear outcomes would still represent a host of uncertainty. A hold of the Legislative branch by the Republicans would be the status quo, but that mix has thus far presented us with trade wars and a range of other aggressive policies. The alternative, however, is clearly the more difficult to calculate scenario. A shift to the Democrats for either the House or House and Senate would represent tumult that slows what progress was being made over the past few years. As important as the elections are to the Dollar, there are a host of competing and as-yet unresolved concerns churning in the background. Later this week, we have a FOMC rate decision which will do more to set expectations for the coming year than promise a hike this week. Meanwhile, the UofM consumer sentiment survey will give leading forecast for growth and planned spending for the engine of growth in the world's largest economy and a world of assets dependent in one way or another on the indulgent consumption habits of the same collective. Add to those known events the unscheduled trade wars and other systemic threats and there is an almost overwhelming number of threats vying for our attention. And as the saying goes, 'when everything is important, nothing is'. 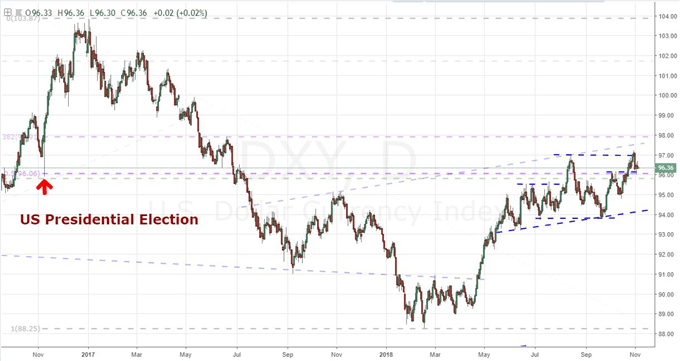 Euro and Pound Await Clearance on Their Own Systemic Fundamental Themes

Risk trends is all consuming and even the United States' election cycle carries an unusually wide reach. Yet, not all high-level fundamental reaches behind its given region and currency - at least not in a full-fledged, self-sustaining way. For the Euro, Monday's session brought a regional investor sentiment survey for November that would naturally gauge the practical market impact of a number of closely observed themes. The disappointing report (8.8 versus 9.4 expected) doesn't encapsulate the underlying weight of the currency's fundamental concerns. The risks of a second Euro-zone sovereign debt crisis is uncomfortably high with Italy refusing to turn off its game of chicken with the EU while general market conditions undermine the world's ability to weather a serious threat. This past session, a meeting of the region's finance ministers rendered the same general verdict on Italy's budget proposal that the European Commission settled upon: the country's proposal was untenable. Nevertheless, Italy's own Finance Minister has committed that they they would not turn off their course for increasing fiscal spending in a bid to amplifying struggling growth. There are few hard timelines for this situation, so it is easy to find the market's resort to complacency as it has so many times before. Unfortunately, for UK officials struggling to wrangle a path towards clarity on the Brexit, it has proven just as difficult to engender agreement on the policy course among UK government officials as it has been between the UK and their EU counterparts. Tuesday will supposedly bring a UK cabinet meeting, but it remains unclear if it will produce a reliable outcome. 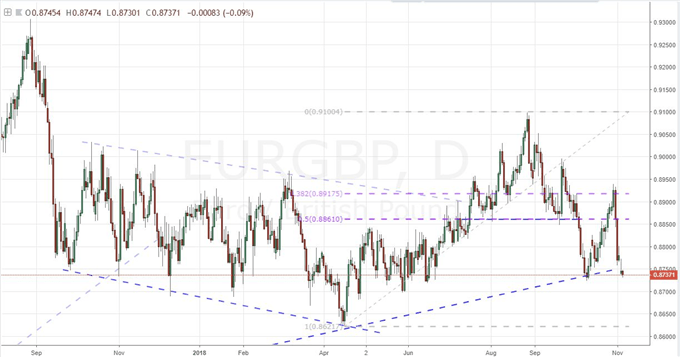 A Reminder of Monetary Policy Distortion on the Extremes: The RBA and BOJ

With the Federal Reserve's rate decision ahead (Thursday), it is easy to forget that there are two other major central bank's weighing in on their own policies this week and a general state of uncertainty on the balance of global monetary policy. That said, there is an absolute dependency on extreme accommodation by the world's largest central banks whether those taking it for granted appreciate their predicament or not. On one end of the spectrum, we have currencies like the Australian and New Zealand Dollars whose presence amongst the majors is heavily dependent on their roles as carry currencies among more liquid counterparts. That appeal has deflated with their respective central banks' series of rate cuts to record low returns and a general flight of capital from low-return carry trades. That said, these wayward carry currencies have already been throttled by their circumstances and they are proving almost completely detached from renewed risks but are in turn exceptionally sensitive to any encouraging projections. At the opposite end of the typical scale, the Bank of Japan (BOJ) had its Governor weigh in on his group's position and the state of the markets they are weighing against. Abe mentioned structural risks on the rise, but more disconcerting was his recognition that extreme monetary policy could destabilize the banking system. At least he acknowledges the 'cost' when so few others even entertain the concern in unfavorable outcomes. We discuss all of this and more in today's Trading Video. 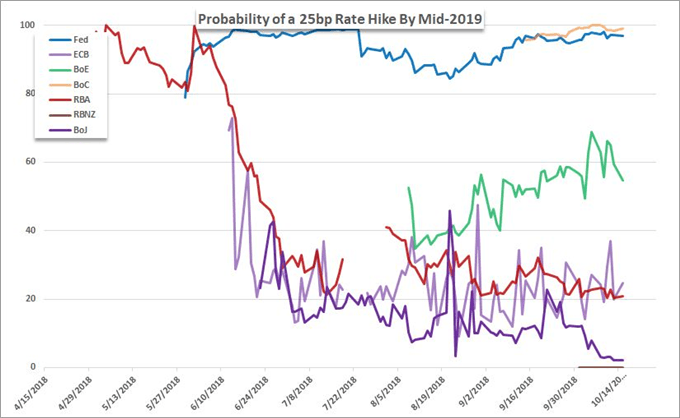