In a repeat of late last week, the US equity indices opened the week to an impressive bullish gap higher. This initial jump that mirrored the concern of the preceding trading session's (Friday) tumble looked very similar to the Wednesday plunge and Thursday bounce. Yet, just as surely as last week's recovery effort fell apart before it could inspire any serious confidence, so too would Monday's optimism shrivel before it could lay any roots. Just the statistics of the session present reason for concern. The close-over-close changes for the major indices were not particularly dramatic, but the progress and intraday volatility add further to the worry of an erratic environment. The Dow for example would carve out *only* its largest range as a percentage of spot price since February, but that is a milestone that is itself extreme historically. An increase in volatility is an unwelcome sign for those evaluating whether to hold onto positions whose profitability is leaking or in fact turning to loss owing to leverage or late entry. The technical progress being made from the S&P 500's retreat is unmistakable with the 200-day moving average and the previous two-year bullish trendline support both now standing as critical resistance against recovering any concept of enthusiasm. Before sentiment started to fall apart in the US afternoon, there was seemingly an effort to promote recovery during the preceding Asian and European sessions which would suggest a qualification of value rather than a systemic unwinding of risk; but the trouble for the EEM emerging market ETF, high yield assets, Treasury yields and more dash that more favorably nuanced view. 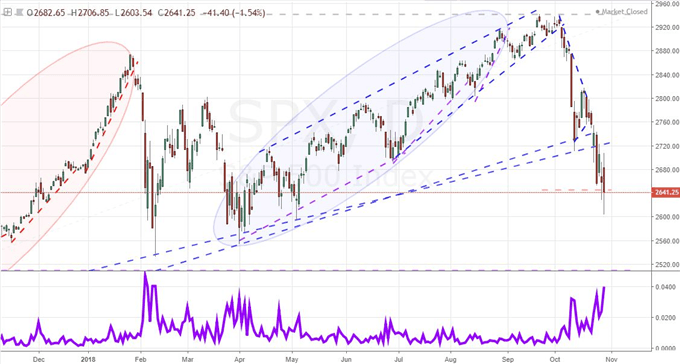 'What is subverting the recovery in sentiment' question should be weighed on a regular basis as it will signify whether we should also be convinced of the systemic nature of risk aversion. There are a number of themes which have been tapped for worry when explaining - even justifying - the retreat, but there was little missing one of the more familiar themes that had simply faded from the top headlines just recently. US-China trade wars were back on the radar thanks to a report from the White House suggesting the United States was ready to pursue the next steps to escalating its pressure on its largest counterpart should the summit between Presidents Trump and Xi fail to break the deadlock. Considering where the markets were standing in their unfolding trend, this looks like an exceptionally poorly timed warning that would further undermine global sentiment. Practically-speaking, these sentiments were not particularly surprising from the US government - President Trump warned he would follow up with his threatened $267 billion additional tariffs if China retaliated for the previous $200 billion infusion. However, with the market more on-alert for threats to exacerbate an already tumultuous situation, such news will not be well received. Meanwhile, other fundamental themes will inevitably rotate back into the primary spot. Sovereign bond yields, global monetary policy losing traction, earnings and more represent possible threats to weigh capital markets even deeper into retreat. 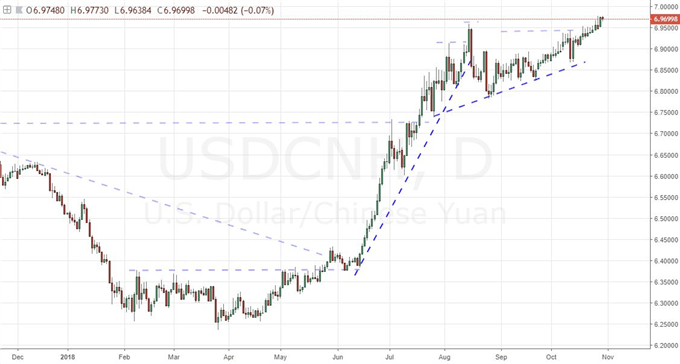 Both the Dollar and Euro Face Split Attentions, But One is Easier to Read

As the different headlines pull us in different directions looking for the 'why' in sentiment, it is important not to lose sight of the fact that risk trends may very well be forming a systemic trend. This is a 'forest for the trees' consideration where obsession over the motivation is takes center stage as either a distraction or unspoken hope that market conditions can readily reverse course so long as the particular catalyst can be rectified. We should not be so distracted. Nevertheless, there can be market movement to fundamentals - theme and event risk. For the Dollar, there will be competition for control from both the abstract and discrete motivations. In thematic terms, the Greenback's role as an extreme safe haven and its more recent carry currency appeal will define much of the movement we can expect for weeks into the future, but it remains unresolved. The Dollar's bearings can in that way also be a remarkable cue for the financial system at large. As for the event risk, Fed's favorite inflation indicator (PCE deflator) and spending report only carry so much market moving potential as Fed tempo matters more in the abstract rather than the technical. The consumer confidence report from the Conference Board Tuesday will tap a different theme to monitor for the coming week: political risk and sentiment surrounding government policies. For the Euro's part, the next 24 hours will be packed for key event risk. Eurozone 3Q GDP and regional sentiment surveys will be of critical importance. However, systemic and long-term issues should draw more of our attention. News that German Chancellor Angela Merkel will not seek re-election will unsettle global investors who have seen her as a key player in maintaining the status quo. That will be a long-term issue while Italy's financial threat to the region is an immediate concern. Italian 3Q GDP and sentiment surveys will compete with an expected budget reported to parliament. Conditions can change suddenly for the Euro, and traders should remain on guard. 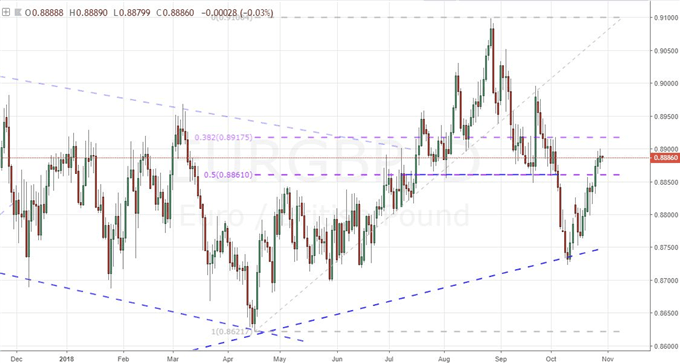 Brexit Hopes are Already Bleeding Freely from the Pound, An Eye to the Aussie

To some extent, there is a binary nature to the Dollar and Euro's more systemic issues. The Dollar will see a political stalemate or refined path for economic policies while the Euro's troubles with Italy will clearly recede or explode. For the Pound, the Brexit situation is all consuming but unceasingly convoluted. The reports over a week ago that Prime Minister Theresa May was ready to break the impasse with her European Union counterparts by compromising on the border were dashed late last week when it was reported talks within her own government had ground to a halt and put progress once again in jeopardy. There is a countdown to the March 29 divorce date, but no definitive timeframe for when the situation will be resolved or suddenly be called 'dead on arrival'. This is more of the event that will dance along the dangerous edge through the indefinite future. As we keep track of the most liquid currencies and their respective fundamental troubles with the most probable outcomes at the forefront of our minds, it is always valuable to consider options for alternative scenarios. Should risk trends hold steady or even recover, the Australian Dollar is one of my preferred options. The currency has notably avoided the pressure of this month's risk slide, suggesting a bias shift. That can stage an opportunity, but only if favorable circumstances were to form. A hold or rebound in risk trends is the most capable scenario. The data due ahead including third quarter GDP and CPI can supplement abstract concerns like the connection between AUD and China's health. We discuss all of this and more in today's Trading Video. 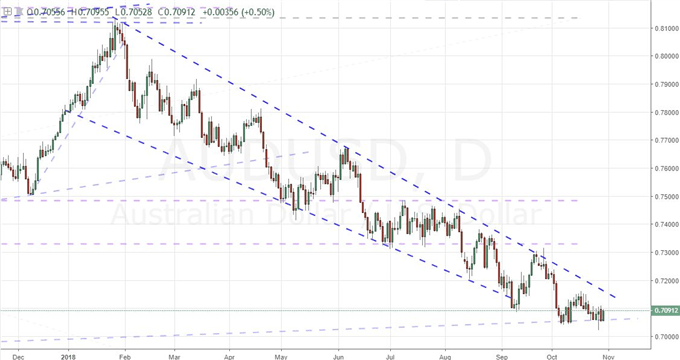