The outlook for the global economy has dimmed amid trade wars and deteriorating diplomatic relationships. That should come as little surprise - and indeed the markets showed little concern with the news - but investors would do well to gauge their speculative enthusiasm (and exposure) against the practical environment they face. At its summit with the World Bank (WB) in Bali, the International Monetary Fund (IMF) released its quarterly update to growth forecasts. The World Economic Outlook (WEO) presented an appropriately disappointing downgrade to the course and health of the global economy. Global GDP projections were downgraded for both 2018 and 2019 from a 3.9 percent pace of expansion to 3.7 percent for both years. Certainly anticipated, the top concerns behind the reference to growing downside risks were the US-China trade war and capital outflow from emerging markets owing in large part to the Fed's path of rate hikes. While the EM region saw its prognosis worsen, the US and China both received downgrades to their 2019 forecasts to 2.5 and 6.2 percent respectively. The report would also carry a scenario assessment for a full-tilt trade war that was sufficiently ominous, but we are likely to gain more of the scope for such a threat in the upcoming Global Financial Stability Report (GFSR). Trade war fall out, speculative excess and an extreme dependency on monetary policy should also reasonably come up in this report. 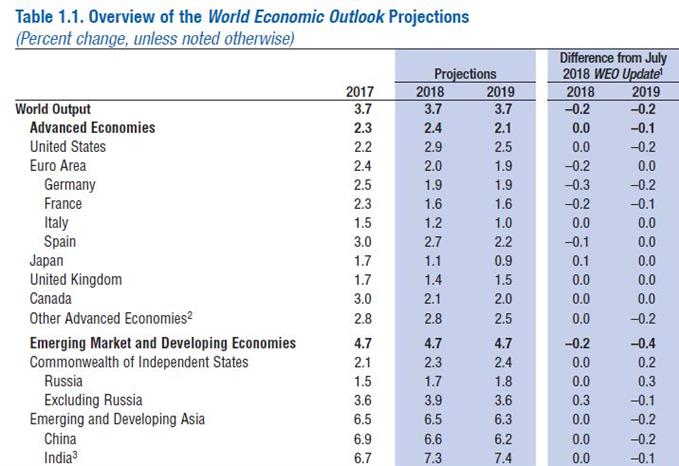 Another point to draw out of the IMF's broad economic assessment was the particular concern over China's ability to manage a critical balance between growth and financial stability. This has been a concern for some time, but to see it in 'black-and-white' in such a report adds weight to the trouble ahead. In recent years, many of the global bouts of speculative pain were either directly related to China issues or were somehow connected in a material way. The August 2015 and January 2016 plunge in risk benchmarks like the S&P 500 for example was clearly related to the fear of currency wars that could follow the country's change to the way it priced the Yuan. Odd today that we have an outright trade war with clear threat of unorthodox escalation, and complacency has followed confusion. Meanwhile, Chinese authorities' efforts to stabilize their systems (or at least obfuscate the troubles) are showing unmistakable cracks. The Shanghai Composite may have been steadied, but it has done so at an explicit discount to global counterparts. USDCNH is rising once again despite the PBoC's stated intentions and USDHKD keeps the pressure on capital escape via Hong Kong. AUDUSD is still one of my preferred measures in terms of accessibility, but a surge in short-term Yuan lending rates in Hong Kong offers an indisputable redline for trouble. Remember, China is the world's second largest economy, it is increasing its financial reach and exposure, and it is notoriously difficult to get an accurate read on its health. 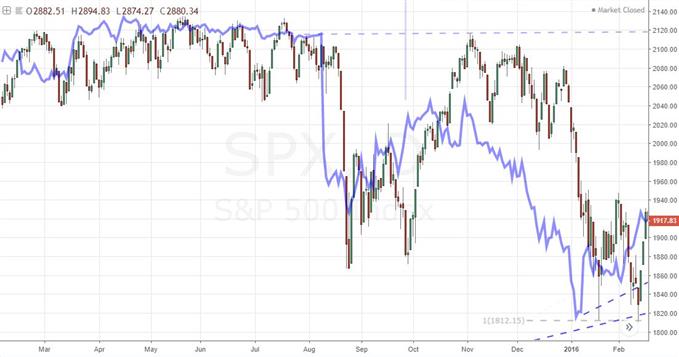 In direct contrast to the opacity of China, the Dollar's motivations and health is laid bare. While the benchmark currency didn't make any dramatic moves this past session, it is clearly showing signs of struggle in sustaining its advance. That should come as no surprise as the jump that we had seen last week was predicated on dubious source. For those that believe this is related to the rise in US 10-year yields; that lift has cooled and other rates were rising alongside US Treasury's. A look to the equally-weighted Dollar Index has the currency losing pace above its August high, but clearly slipping. The trade-weighted DXY Index is more fluid in its rollover. The pace has slowly drained and sets the stage for a reversal of course like the trajectory of a cannon ball at the peak of its climb before gravity takes over. Fundamentally, there was an interesting consumer sentiment survey released by the New Yor Fed Tuesday, but that generated little attention for growth in earnings and outlook for shares advance. That shouldn't be too surprising as even President Donald Trump's remarks to rehash his treat to up the trade war to full against China and criticize the Federal Reserve for pursuing its rate hikes rendered little tangible response. It is that latter perspective from the leader of the free world that should be of particular concern however. If the Dollar rolls over on its own, it may not draw out any further rhetoric in the near term. However, if the Greenback continues to advance as the United States' debt load grows, the Administration may attempt to talk the currency or even go so far as to enact policy that effects that outcome. 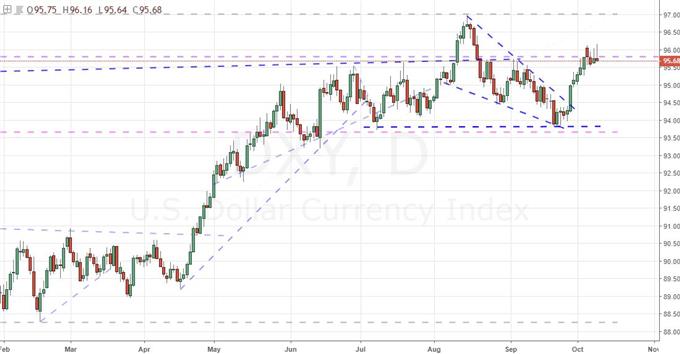 Oil Feels a Traditional Fundamental Twinge, Some Other Markets Stage Without Guidance

Not particularly prone to traditional fundamental updates as of late, crude oil finally start to respond to headlines. US-based WTI crude oil prices rose for the first time in four trading days on headlines that a storm in the Gulf of Mexico had intensified and Hurricane Michael was now approaching the Florida panhandle. As it approaches, it has taken an estimated fifth of the oil production in that region offline. While traditional supply-demand factors may be registering, it isn't hefty enough to sustain a trend. Of further interest, the impact on supply is more significant for the US-standard, but Brent rose as well. The Brent-WTI spread in the meantime holds above $10 per barrel. Don't expect a persistent trend from this charge. In contrast to the the clear motivation via oil, the Canadian Dollar and Swiss Franc present a charged technical picture but lack for influence beyond what we have already registered. An equally-weighted Loonie index has slowly flagged from its post-NAFTA breakthrough relief rally. How far and fast will this retreat run? The answer to that question can facilitate interesting trade opportunities. The same technical intent holds for the Swiss Franc. However, the break lower and retreat for that currency is merely paused and can continue its tumble with the proper catalyst. It can also regain traction with a less-than-explicit fundamental cue. We discuss all of this and more in today's Trading Video. 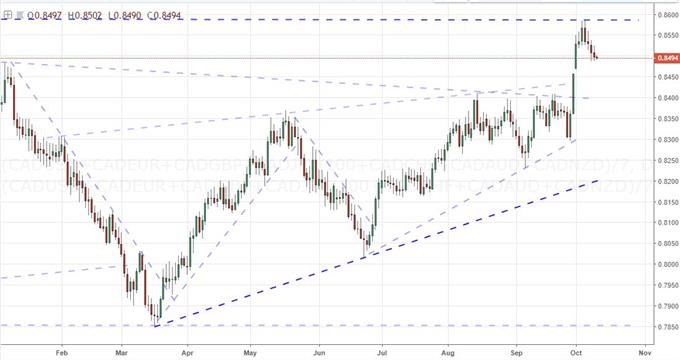