The past 48 hours has seen a significant jolt of volatility for some key assets with a moderate resolution to 'risk appetite' through all the action. With headlines touching trade wars, economic activity and US earnings; there was plenty to turn over the market's engine, but not enough fuel to travel any significant speculative distance. Political headlines in the United States following President Trump's critique of the country's NATO allies and voicing support for Russian President Vladimir Putin were still cycling through the news reel, but it still wasn't carrying the expected fear it would insinuate for global growth. That same apathy was still being applied to trade wars as well. Perhaps reports from President Trump that the US and EU were due to discuss trade on July 25th while the administration was also arranging bilateral talks with Mexico and Canada was look reassuring in this dull light where fear over stability never metabolizes. Yet, we have seen enough false dawn on negotiations to be truly optimistic. Further, there should be recognition at this stage that even if the tension does cool, it will only prevent crisis - not trigger conditions ripe for true opportunity. It is in this light, that we find US equity indices inching higher - while the tech-heavy Nasdaq holds off from a fresh record on Google's unprecedented fine from the EU. My interest in the risk spectrum rests with the Yen crosses due to my USDJPY exposure where an equally-weighted index refused new highs at a generally established range resistance. 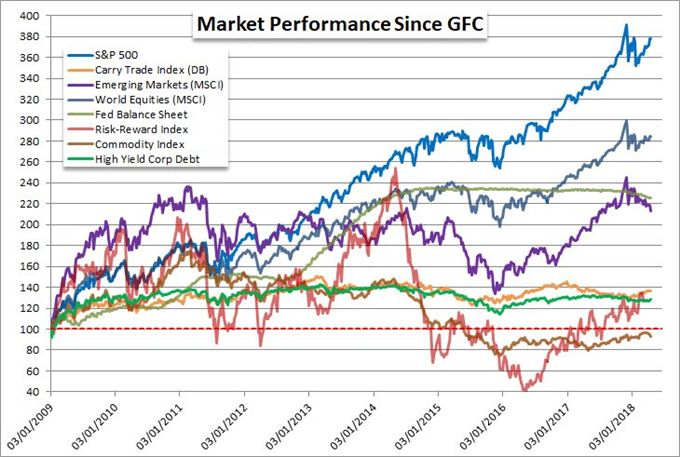 If the deeper implications to trade wars aren't being investigated and risk appetite is holding out, the logic follows that the US Dollar would hold its own. The trade-weighted ICE's DXY Dollar Index jumped higher on the day, but retreated from its run before putting pressure on last month's high - and ostensibly disarming a head-and-shoulders pattern that it is close to completing. A broad market appreciation of the connections between a global trade war and the Dollar's risk for being at the center of it all as instigator has yet to be made. As such, the suggestion by President Trump that discussions are scheduled between US trade representatives and their counterparts from the EU, Canada and Mexico are more readily taken at face value. More readily absorbed into the speculative stream are monetary policy factors. Fed Chair Jerome Powell's second day of testimony in Congress (this time before the House) provided just as little tangible ground to alter the perceived advantage for the USD in its lonely perch at the top of the rate hierarchy. He did, however, voice concern about the risks from trade wars. It will be important to remember that for rate forecasting should trade conditions start to weigh on economic data. The docket thins out noticeably through the rest of this week, so either keep an eye open for non-scheduled catalysts or recalibrate expectations for Dollar trades.

Where the Dollar is lacking for fundamental drive, the Pound seems to be have plenty - though that doesn't mean it is being reaped in support of the currency. The Pound suffered a second day of broad selling pressure Wednesday despite news that Prime Minister May had avoided a Parliament vote that could once again throw her leadership and the country's Brexit approach into array. Where this could have been interpreted as positive, the reality is the tally vary narrowly avoided a painful outcome. The Prime Minister reiterated her view that 'no deal' was better than a 'bad deal', which seems to ensure negotiations will be troubled whether internally or whenever it gets to the table with the EU. For their part, European Union officials are concerned enough that a 'no deal' outcome could result that they are reportedly considering an extension on the Amendment 50 for the UK. Is that really a silver lining? Meanwhile, the docket over the next 48 hours is notably light for meaningful scheduled releases. One stand out is the Australian Dollar which will take in the recent jobs figures and 2Q business sentiment - the former a frequent volatility spark and latter a strong cue for trade wars. We'll see if this offers enough of an influence to earn some material movement as we have seen from the Kiwi Dollar which is still on the move after the CPI update.

There are many examples where fundamentals are not following a clear path towards market movement, but there are few examples as easily registered as oil. Following a notable retreat through Monday, the commodity has a temporary floor to bounce from. We could look to the energy market headlines or try to draw a connection to the pricing instrument (Dollar), but this is still a market that continues to abide trading conditions more readily than fundamentals or even technicals - though the latter better conforms to conditions. It is exceedingly difficult to earn critical breaks - much less true trends - in these markets, and oil continues to exhibit these restraints readily. Gold seems to defy the range banner as it has extended its slide to fresh multi-month lows while taking notably support levels out along the way. Yet, this just illustrates the technical shortcomings as readily as the fundamentals. The metal is still in a broad range over the past five years and seems to earn modest support from the Dollar's stolid gains; but ultimately, it is best positioned for the most loaded scenario from a global risk perspective - should sentiment fall apart and expose the lack of capacity for central banks to put out the fire. Finally, cryptocurrencies are also back in the headlines - with more bombastic reference than they perhaps deserve. Bitcoin and crew had a strong two-day rally but there is hardly a trend to speak of in this drive. We discuss all of this and more in today's Trading Video.