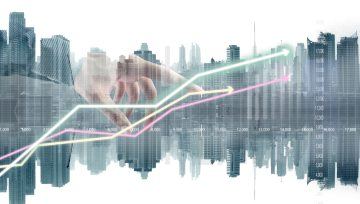 What makes for a 'great' trader? Strategy is important but there are many ways we can analyze to good trades. The most important limitations and advances are found in our own psychology. Download the DailyFX Building Confidence in Trading and Traits of Successful Traders guides to learn how to set your course from the beginning.Download these and more guides on the DailyFX Trading Guides page.

Anticipation for the G-7 Draws the World's Attention

Tension has been building up into the upcoming G-7 leaders’ summit for weeks. The United States has increased the pressure on its trade partners for months with warnings and threats of trade actions it intended to rebalance a perceived disadvantage through the global flow of goods and capital around the world. The delayed metals tariffs would have earned heavy debate amongst these world leaders all by itself. The country's decision to push ahead with tariffs on China for supposed intellectual property theft would have steered the conversation towards concern of reciprocation from the economic giant that could exacerbate financial issues with global implications from emerging markets to the developed. But, when the Trump administration announced a week ago that it would implement its steel and aluminum duties against the European Union, Canada and Mexico; it made the debate far more intense and direct. We have already seen the moves to retaliate on an individual basis, but the true risk to the US is a collaborative response aimed at punishing the economy for its belligerence. The fallout from this path we find ourselves on can be extreme and wide reaching. It should thereby come as little surprise that market participants aren't particularly keen on holding excess risk - much less build it up - into this unknown next phase. 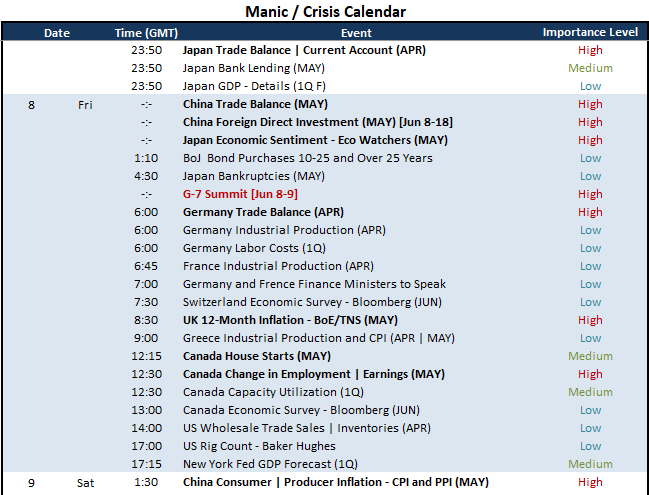 An open trade war poses a systemic threat regardless of what state the speculative backdrop was in. Yet, where sentiment and asset prices are stretched and the foundations for confidence have long eroded away; the risk is exponentially greater. The global capital markets started to run astray of traditional value metrics years ago with an assumption of low volatility maintaining complacency through the indefinite future. Though we have not eased back from the excessive exposure to risky assets, recognition of what could go wrong has slowly leached its way into the collective subconscious. Trade wars threatens to do away with all indulgence in complacency and lay bare where each participant has over-reached. There was only a taste of recognition from the leading 'risk' assets this past session. Global indices checked the uneven advance form Wednesday with modest retreat for most of the world's top indices. The blue-chip down managed to hold its own with a small gain to tack onto its 1.4 percent charge the previous session. The S&P 500 was little changed, but the pace-setting Nasdaq registered its biggest drop since May 15 that looked like a cliff drop from its record high. Benchmarks tend to lead on turns lower just as they guide on the way up. 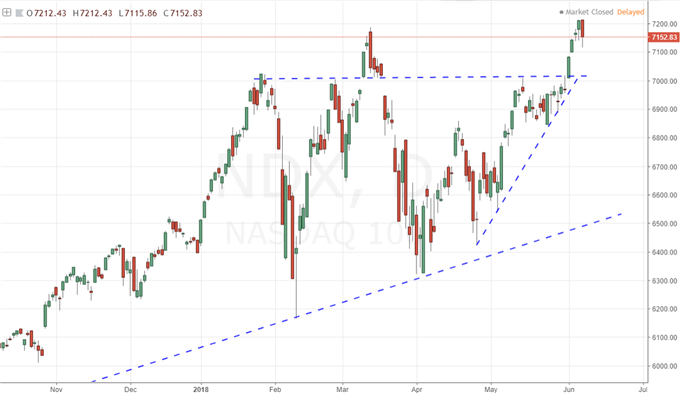 Complications for the Dollar and Euro Well Into Next Week

With the financial media dubbing the Friday-Saturday summit the 'G6+1', it is clear that the expectation is for the US to come under serious pressure from its peers for its aggressive posturing. That puts the Dollar directly in the line of fire, and the four-day slide from the DXY (matching the longest tumble since January 2nd) seems to be following exactly the track we would expect. The head-and-shoulders pattern this bear trend has evolved from could easily extend or stall depending on how the discussions play out. However, another layer of complication will be added to the currency's landscape considering the market will have to split its attention or immediately shift gears with the FOMC rate decision on Wednesday. Given the near certainty of a hike and the recent trouble for forecasts through data and trade wars, it will be an event that will throttle development in its lead up. The same check against trend or technical progress will burden the Euro. The equally-weighted Euro index has posted an impressive climb these past few days as speculation of a clear path towards normalization for the ECB gains traction with each member's remarks leading into Thursday’s policy event. As impressive and 'clean' as EURUSD may seem, be wary of its burden. 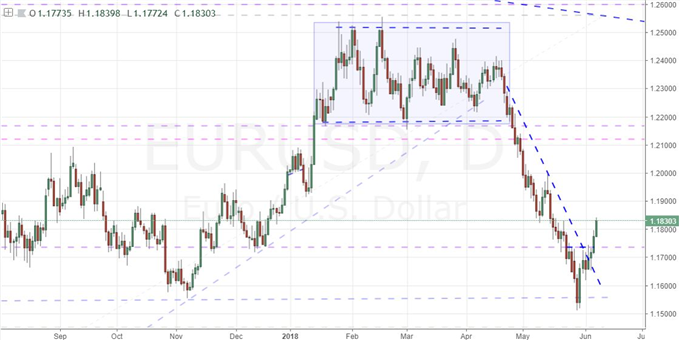 While much of the market's attention will be trained on a few key events moving forward, we should keep tabs on underlying trends as well as key events. Underlying sentiment in particular can instigate seismic change for the financial system. Looking further out the curve than the tech-heavy US equity indices, emerging markets represent one of the most at-risk segments of assets. Not only are they leveraged to sentiment, they also draw strong ties to the US Dollar. The MSCI's Emerging Market ETF (EEM) this past session proved Wednesday's tentative break a false move with a retreat Thursday. Far more remarkable was the weakness from the EM currencies relative to the Dollar. USD/MXN progressed to fresh highs despite Mexico adopting its own tariffs, USDINR turned higher in defiance of a recent rate hike and policy authorities have had little success in halting the USD/BRC's climb. From theme to individual catalysts, the Canadian dollar will absorb a few pieces of important event risk, but it is the labor report that carries a reliable track record for generating volatility. We discuss all of this and more in today's Trading Video. 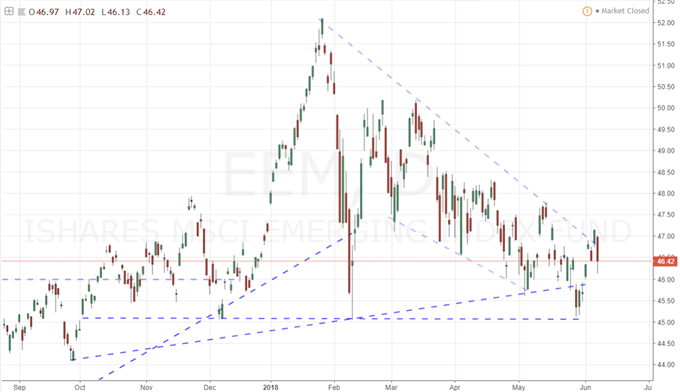