Do you want to learn how to trade event risk? Download the strategy guide on for trading news events on theDailyFX Trading Guides page.

The S&P 500 has gapped higher to start eight of the past nine weeks. And yet, over that same period of time the benchmark has gained remarkably little traction with volatile trade and little promotion of trend development. When it comes to evaluating risk trends, the US benchmark indices offer decent shortcuts. That said, they are not well-suited to measuring true conviction nor the early signs of risk aversion. Rather than labeling this and other US indices general risk measures, we should consider their measure more as a measure of complacency that defaults to short-term risk taking. We can see the lack of depth behind sentiment comparing the different headliners. The S&P 500 and Dow enjoyed the bullish gap but follow through in active trade was notably reserved. The tech-heavy Nasdaq however exhibited gap and follow through to close in on record highs. Even more concentrated was the FAANG collective which has extended its run into record territory on an accelerated rising wedge. We see the same targeted speculative reach without true conviction across global indices (FTSE MIB, DAX, Nikkei 225, etc), emerging markets and Yen crosses. Skepticism should come as no surprise with trade wars in starting to hit their stride. 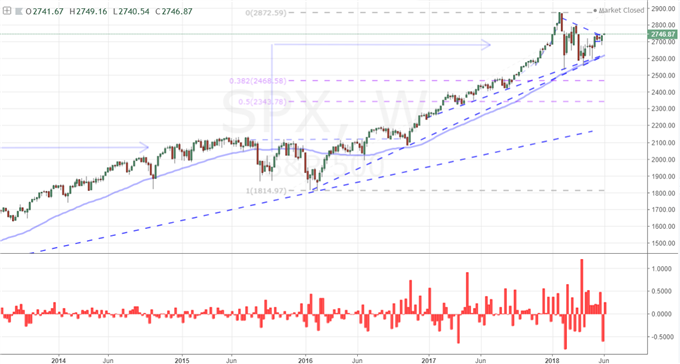 With the US depressing the accelerator to global trade wars, the implications for global investor sentiment is relatively straight forward. The detrimental influence on global growth readily translates into financial market strength. Yet, there are also long-term regional implications. Though the Trump administration is pursuing tariffs in a bid to offer short-term support for its own economy, the long-term ramifications are exceptionally detrimental to the United States if its global trade partners retaliate in concert. And, that is what they seem intent on doing. In response to the passage of its aluminum and steel tariffs last week; the European Union, Canadian and Mexican authorities all announced economic responses to the US. Before this news, a number of key policy members - such as EU trade minister Malmstrom - said collaborative efforts to respond to the aggressive moves were already being considered. What surprises me is not the market's concern, but rather its timely recognition of the negative implications for the US. It is already starting to show in the headlines and the hesitation from the dollar is already starting to show in a head-and-shoulders pattern in the DXY Dollar Index (inverse head-and-shoulders for EUR/USD). This is not the sign of a reversal yet, but it is the precursor should it be motivated. Watch the tenor of the headlines and the progress from the Greenback carefully. 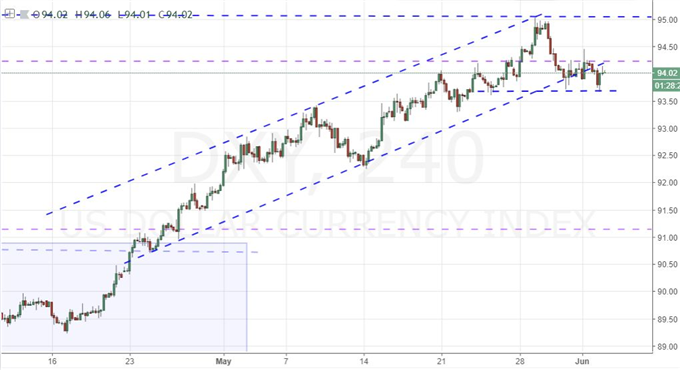 The Trouble with Trading a Hyper-Active Aussie Dollar

If there is any single currency that is clearly charged for fundamentals this week, it would be the Australian Dollar. The currency was already off to a remarkably strong start Monday with a range of event risk supporting a launch higher. Though all the various indicators would ultimately support a bullish tone, the first quarter corporate profit charge of 5.9 percent was clearly the leading update. An equally-weighted index for the Aussie Dollar posted shows the best daily performance since July 18. That intensity is difficult to deny, but to simply through conviction behind a strong single session would clearly be very risky given what is on tap over the coming 48 hours. Tuesday afternoon in Australia, the RBA is due to weigh in on its monetary policy bearings. Under normal circumstances, this would be an event of little consequence as they hold steady at record low benchmark. Yet, the change in tone with the RBNZ and BoC recently have changed the market's sensitivity to monetary policy views for primary carry currencies. Even beyond the policy decision, Wednesday further brings 1Q GDP. This is too much high profile event risk to assume a trend can readily form without interference. Be mindful of your Aussie setups, even when they look as technically appealing as AUD/USD or GBP/AUD. 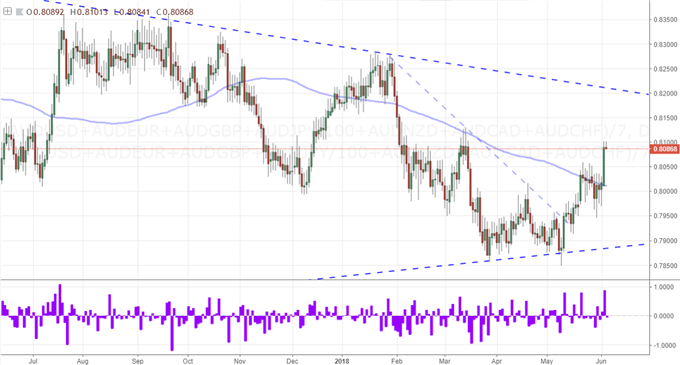 Crude oil has frustrated many swing traders for months. It has a tendency to forge intense but abrupt moves that fall apart before any progressive momentum trend can form. If you are quick enough to take advantage of the volatility or patient enough to wait out a year-long investment, there was something to this market. Yet, most of us don't fall into that category. Another attempt at a swing may be under way, but its course seems to have flipped to a bearish bias. The US-based WTI crude oil contract has slid below its 100-day moving average shortly after clearing a multi-month rising trendline support. In other words, the technical implications of a turn are starting to grow more material. Yet, a break is not a trend. Momentum arises from motivation and then conviction. Tempered growth and competing forces of production are working to weigh the supply-demand balance. Yet, we can see an obvious curb on the evolution of a true bear trend when we compare the spread between the WTI and its European counterpart (Brent). The spread has ballooned to just shy of $12. If this market were to tip a full blown bear trend, both would be heading lower at a closer tempo. We discuss all of this and more in today's Trading Video.