Do you want to know what fundamental event risk and broader themes are directing the markets and volatility? Come join me for Monday's weekly Fundamental Trading webinar. Sign up on the DailyFX Webinar Calendar page.

The Difference Between Fundamentals and Technicals, Weekly Close and Intraday

If you were to assess the health of the markets this past week - to gauge your convictions for holding and placing trades moving forward - by simply comparing Friday's close versus the previous Friday's close, you would reasonable say conditions are steady. On a week-over-week basis, the S&P 500 was little changed. However, for those that were keeping tabs on the financial system's progress regularly through the week, it was readily apparent that there has been a material erosion of stability adding to compounding deterioration over months. Our first sign that something was amiss was the fact that the S&P 500 changed direction while maintaining a certain degree of intensity each active day this past week. The threat of another Italian election, the country then working back towards a government, the US announcing tariffs on key trade partners and then the US labor data for May bolstering economic confidence seemed to flick the sentiment switch on an off regularly. Through various themes, we have seen the threat of certain risks recede - not an actual improvement in the fundamental outlook - but one lasting change will carry us forward: the US imposing steel and aluminum tariffs on the European Union, Canada and Mexico. 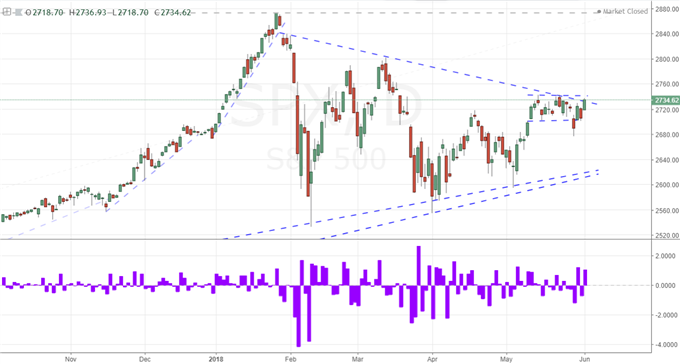 Risk Trends and the Dollar

When it comes to sentiment, it is rather easy to point to an exceptional degree of complacency in market participants' participation in the market. The Dow just off a record high following a nine-year rally despite increasingly obvious inequities, an appetite in FX markets for carry trade despite the extraordinarily low yield throughout and the persistent retreat in the VIX index as a fear measure are all familiar. The longer investors decide to ignore the disparity between value and price, the greater the ultimate reckoning, but it is nevertheless appreciable. For the Dollar, there is a more recent but nonetheless troubling complacency building. The motivation for taking off my EUR/USD short this past week is born from a material degrading in an already uneven fundamental backdrop. My conviction was never particularly robust for the position, but a stretched position from 2017's swing, the excessive net speculative positioning and a weakening of the Greenback's major counterparts offered enough traction stick with it. That mix is still present to some extent, but now the outlook for the Dollar itself isn't passive. With the US pursuing tariffs against its major trade partners, the probability of retaliation that is collaborative and directed towards the country is high. This can permanently divert capital away from the US economy and market which means less Dollar turnover overall. This may not hold short-term Dollar bull moves, but it is a lasting burden that makes a passive bull strategy difficult to support. It will be important to watch the G7 leaders’ summit next Friday and Saturday to the world's largest developed world economies will respond to provocation. 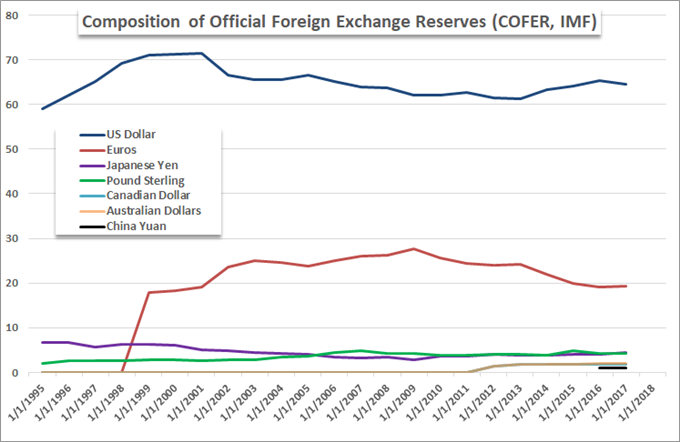 In contrast to the downgrade the Dollar's immediate fundamental outlook has received, the immediate outlook for the Euro has improved. That does not mean, however, that a redux of the 2017 trend is just around the corner. With Italian politics, the importance for FX traders is the risk posed to the Euro through one of its major member's political stability. Heading to another election is a certain sign of instability, but it wouldn't materially alter the reality that a populist shift is taking hold in Italy, threatening to undermine the unity of the Eurozone. Now, with a government sworn in, we haven't changed the underlying risk that the two parties that comprise the acting government (5-Star and League) have voiced clear anti-Euro and anti-EU sentiment during the campaign and can return to those vows should conditions prompt it. The same caution qualification for ECB policy keeps the Euro in an uncertain position. Though the ECB is more likely to announce its path towards normalization next month after the CPI and jobless figures, it is still a long path towards normalization and it requires an exceptional appetite for risk to favor a distant rate hike. In short, be skeptical of riding out any Euro recoveries for pairs like EUR/USD, EUR/JPY or EUR/AUD. 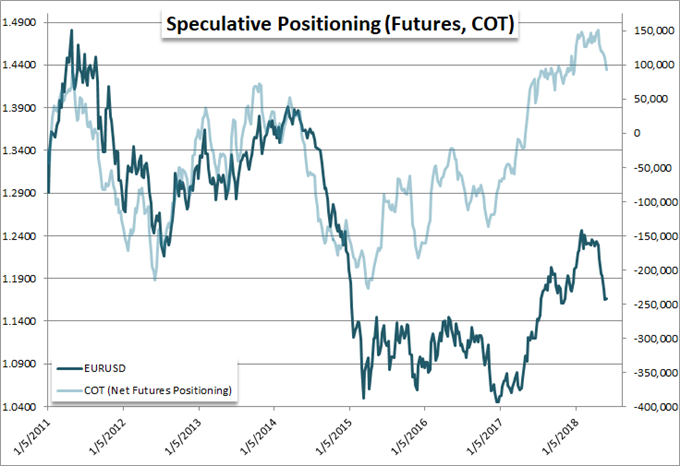 Looking out over the coming week, there is a wide ranging week of scheduled event risk. That said, one particular currency stands out for its concentrated list of important event risk: the Australian Dollar. Tuesday morning, the Reserve Bank of Australia's (RBA) rate decision Tuesday morning should be monitored carefully. While this group is unlikely to change its monetary policy setting, the hawkish shift from the BoC and warning that the RBNZ could just as likely cut rates puts this group in the spot light. Outside of the policy group's update, there is also 1Q GDP and the current account (broad trade). Less headline-oriented, China's financial future has changed materially as of this past Friday. MSCI added 230 Chinese A-shares to its indices, extending the country's financial spread - reducing the risks it faces alone but widening the impact of any future trouble. Another global benchmark, US oil ended this past week with a technical break below 66 - the trend channel support stretching back months. I don't consider this a definitive break with trend implications, but it is remarkable. This move is even more remarkable considering it is diverging further and further from the value of the European benchmark Brent contract. The divergence between the US and European is now over $11 - the widest since March 2015. What does this basis risk mean for the energy market and growth outlook? We discuss all of this and more in this weekend Trading Video. 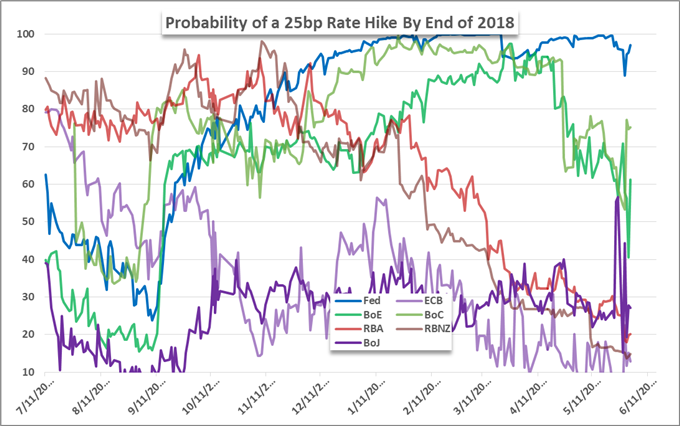