Risk trends were already sour through the Asian and European sessions Thursday with the time zones' indices and other capital market assets fading. These region's markets never made the same effort at an intense rebound following February's collapse that the United States benchmarks did. That suggests that the recovery in speculative appetite was unique to the country and thereby unlikely to sustain itself - rarely does a single country or asset type find an enthusiastic drive in sentiment where the rest of the world heads the other direction. That being said, the US markets opened with a notable sense of restraint and stability. Yet, regardless of how that effort may have played out if undisturbed, it was severed by the revival of a headline that we have seen frequently these past few weeks: tariffs. US President Donald Trump prepared the markets for details on tariffs he intended to impose on steel and aluminum imports to the United States next week. We had this threat of the next escalation in trade wars circling in the background, but it quickly came to the fore this past session. 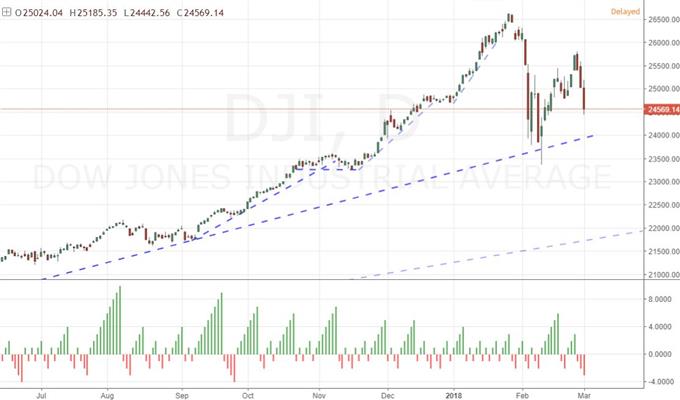 Trade Wars, Huh, What are They Good For?

The US seems intent to raise tariff on trade partners for its perceived slight through unfair trade practices, but it is very unlikely to end with the many countries this effects to simply sit idly by suffering the loss of export-derived GDP. Retaliation is highly like, and so begins the trade war in earnest. There are no winners in a trade war. The US has relatively recent history to refer to when evaluating the impact such policy can have. The Bush-era tariffs were brought to an end with a net loss of jobs and economic loss for the US owing in large part to the higher costs of imported goods that resulted. Another side effect of this policy course is a more active currency war. The US has already been accused of pursuing policy aimed at devaluing the Greenback - most recently by some ECB members in the central bank's minutes. The policy path the US is on will likely see trade partners either decide to or forced to circumvent the US Dollar which will be a permanent downgrade for the currency. These concerns started to dawn on traders and handily offset some provocative rhetoric from New York Fed President Dudley who raised the stakes on the 'gradual' language used with referencing rates - he said four 25 basis point hikes in 2018 would still be gradual. 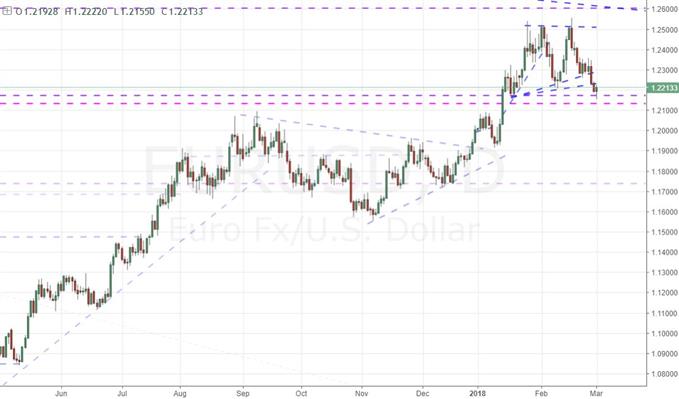 Gold and Oil Have a Steak In It

The Dollar and explicit 'risk' assets are the only markets with skin in the game when it comes to trade wars. Crude oil posted a notable reversal/rebound Thursday afternoon with the headlines. The intraday rebound would result in the largest 'bullish tail' since May 5th - though it notably didn't turn the day bullish. The impact on gold was far more remarkable. The precious metal similarly reversed course midday. For gold though, the tail was the largest since July 2016. Given the safe haven status the commodity has established over the decades, the slide in equities was a rather direct appeal for the commodity. That said, the attraction runs deeper than that. As we had seen in 2008 through 2011, gold took on an equally systemic appeal as an alternative to 'fiat currency'. With the Dollar, Euro, Pound and Yen fundamental concerns; there is a growing appeal of an alternative to government-led currencies. 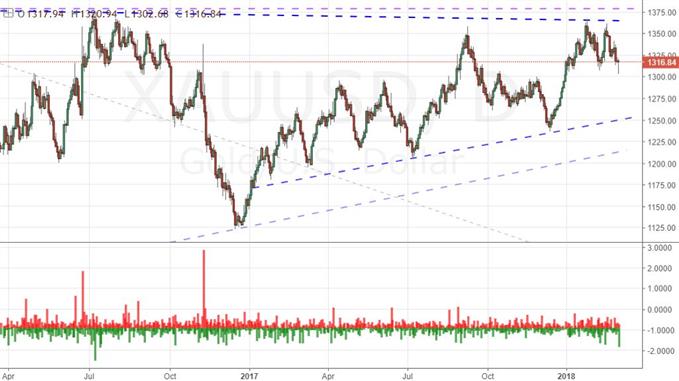 Beware the Other Major Event and Thematic Event Risk Ahead

While the US-led tariffs on the horizon are a global concern in a risk-sensitive market, they are not the only fundamental catalyst and theme we need to keep an eye on. Coming up Friday, the constant influence from Brexit threatens to see a particularly charged impact with UK Prime Minister Theresa May set to deliver her government's rebuttal to the rejected EU draft on Wednesday. The rejection led to a hefty Sterling drop. Given the lack of clarity on the UK's demands of late, a vague response will not likely be read encouragingly by the EU nor hte Pound. For those tracking the EUR/USD or EUR/JPY, it is probably best to avoid exposure into the weekend. The Italian election is on Sunday, and its outcome could hold significant consequences for the political stability of the Eurozone. Looking a little further ahead, we have a range of rate decisions, GDP readings and more next week. With volatility actually translating from fundamentals, traders should remain on their toes. We discuss all of this and more in today's trading video. 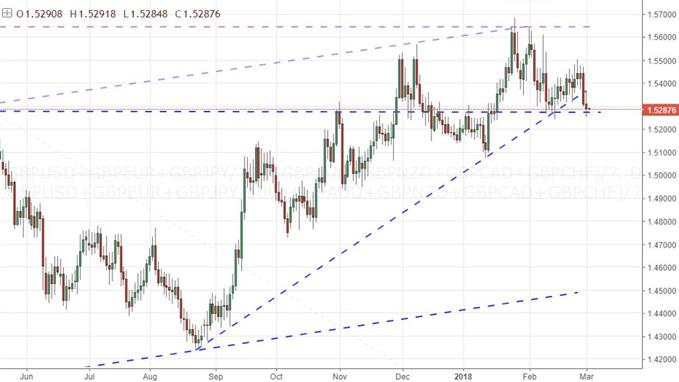