The markets seemed to be sliding back this past week into the doldrums traders suffered through in the summer of 2014. With hope for meaningful swings fading further due to the expected holiday drain this week, it was surprising to see key volatility measures on the rise Monday. From the S&P 500-based VIX index, the first close above 14 in 2017 looked meaningful given the drought of anticipation lately. Yet, any advance from extreme lows will look sizable in context. Realistically, the measure is still extraordinarily low compared to historical context. The CBOE's Euro Volatility Index (EVZ) has given a more remarkable signal. Having climbed for the past three weeks straight to double its index value, it would seem that EUR/USD is either facing extreme moves itself or is leading a systemic shift in sentiment. Neither seem to fit the conditions we are working with.

EUR/USD may have fallen from its 1.0900 peak just a few weeks ago, but the move hardly reflects overwhelming momentum and the fundamental motivation doesn't seem to be a household concern as of yet. The bearings for monetary policy have grown more competitive between the ECB and Fed than most would expect from a brief glance over the score card. While the Fed is three quarter-percent hikes deep and the ECB (European Central Bank) is still 8 months away from finishing its stimulus program, there is competition in their pace of change. The US central bank is considering a move to its work off its balance sheet while the its European counterpart has cast a test flag about hiking rates before it cuts off the QE. Which has the greater potential: a Fed escalation into uncharted territory or a faster pace of reversal than what the US tracked out before it.

The event risk that opened this week, had meaningful opportunity to push this debate further. The ECB's annual report was released, but the tone was one of status quo. President Draghi and his colleagues didn't offer any tracks for speculators to forecast a viability probability or timeframe for the implementation of its dichotomous policy ambitions. In the New York session, Fed Chair Yellen was speaking at the University of Michigan and took questions from the audience (and Twitter). In her typically deft fashion, she avoided anything controversial that traders could latch on to. Looking for scraps of volatility and meaningful swings or breaks continues to draw traders into dead ends. Keeping a sense of skepticism and preparedness is good practice, but active trading should still focus on the short-term. On that front, the less encumbered crosses may offer better opportunity given that they have less fundamental obstruction to compete with. The Aussie Dollar's slide can focus on its own event risk and avoid countervailing winds. A rebound for the Australian currency would fit well with technicals and market conditions for GBP/AUD while a break and follow through would cater to AUD/NZD's progressive head-and-shoulders breakdown. We wade through the markets opportunities in today's Trading Video. 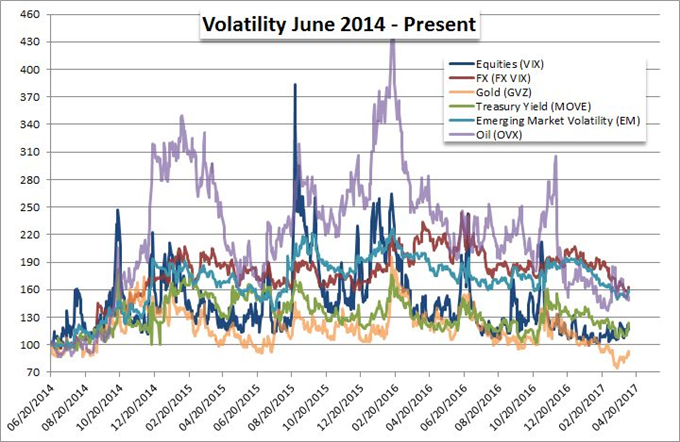