As the world’s most liquid currency, the US Dollar plays a variety of roles depending on what is important in the global financial system. Over the past year to 18 months, the focus has been the shifting seas of relative monetary policy. That placed a focus on which central bank was outstripping its counterparts for more stimulus or which was looking at the first rate hike. That focus looks to be in flux, however, as scrounging for yield has been abandoned for a guttural need for absolute safety.

Up until a few weeks ago, the market has been focused on the timing and direction of the Federal Reserve. The central bank was taking the unusual stance of warning that policy tightening was soon on its agenda. That would reverse years of increasingly accommodative monetary policy and general contradicts the continued support offered by most other authorities around the world (as can be seen in the policy standings graph below). 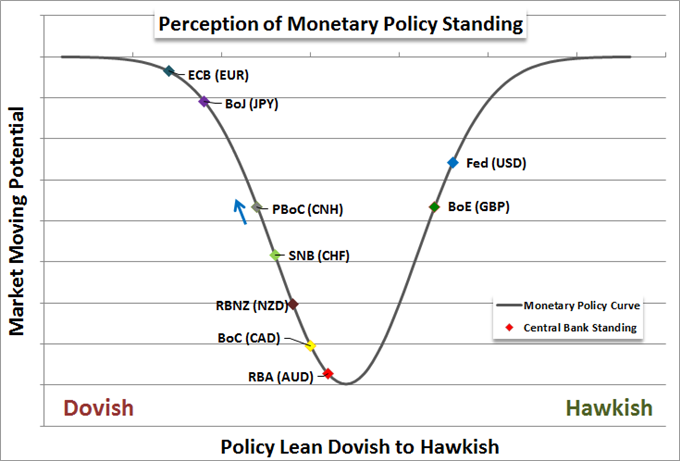 Over the past weeks and months, the focus on Fed speculation – and thereby the Dollar’s bearings – has centered on the liftoff date for rates. After the ‘quarterly FOMC meeting’ on June 17 ended without change, the concentration turned to whether there would be liftoff on September 17, December 16 or sometime next year. Initially, the Dollar saw its premium as a likely ‘first mover’ swell so much that the indexed currency advanced for an astounding nine consecutive months through March. Since that incredible run, it has leveled off as the market found a sense of equilibrium to its advantage.

While rate timing has moved from a buildup in speculative expectation to more of a month-to-month and week-to-week data dependency time frame, we have also started to see sizable cracks start to form in financial market volatility. As fear and volatility spread, the pressure for the Fed to defer normalization has increased substantially. Considering the Dollar has founded considerable strength behind its early hikes, this easing deflates some of the currency’s premium. We can see this pullback in rate premium via the graph below. The two-year Treasury yield has traced out the same general path of speculation with Fed timing. Demands for greater returns on fixed rate assets rises in the face of higher future market rates, so prices go down and yields go up. As confidence of the first move cools, both yield and currency stumble. 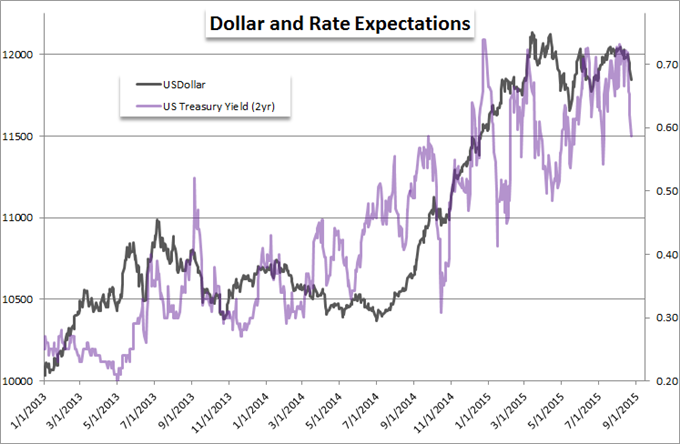 The Dollar certainly maintains a significant amount of fundamental value attached to the timing of its first rate hike. As capital markets churn, speculation over the Fed’s convictions will intensify. There are those that believe the group will continue forward with its normalization through all but a liquidity crisis and those that think they are far more sensitive to stock market movement such that they will sooth with a steady hand. This speculation will generate a lot of attention and headlines. However, the Dollar may detach itself from the theme regardless of how intense the speculation is.

While the Dollar’s first mover rate status carries considerable weight, there is a theme that overrides the market’s anticipation for returns – the fear of risk. ‘Panic’ is always the stronger and more abrupt extreme to ‘Greed’, and we are seeing the scales tip towards preservation of capital at all costs. The Greenback carries as haven status that tends to be more engaging when liquidity is most prone. As can be seen below, the Dollar has a strong positive correlation to FX-based volatility measures (often considered a gauge of fear). 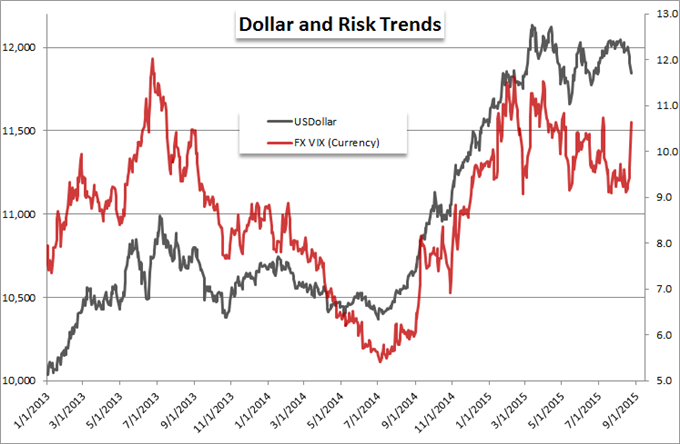 The question of whether the Dollar rises or falls moving forward fundamentally boils down to the intensity of risk aversion. If fear were to completely clear up, the Fed would likely be back on track for earlier rate hikes, emboldened by the market’s ability to stabilize itself. That would be bullish for the Dollar. In the event that risk aversion sweeps the global financial system, the Fed’s timing advantage will matter little to those seeking the deep liquidity that the US represents. In the transition phase between these two roles is where the Greenback struggles – enough weakness to bleed its hike outlook but not enough to trigger an absolute safe haven bid.

If we look back over history, we can see fundamental influence oscillate as the focus has changed. Below we have the US Dollar versus 2-year Treasury yields on a weekly time frame with a 50-week correlation. Where strongly positive, it is indicative of the market focusing on a Fed that is easing or tightening more competitively than its counterparts.

In contrast, we have the US Dollar versus the equities-based VIX volatility index from the CBOE (though it is stock-specific, it is considered one of the most direct measures of sentiment in the capital markets). As the correlation strengthens here, there is greater reverence to fear and speculative appetite.