Gyrations in global equity markets, sovereign bond yields, and FX markets have produced a caustic environment for precious metals. Sharp declines by gold prices at the end of September and Q3’19 were met with enthusiastic buying at the start of October, largely thanks to concerns over the state of global growth after weak PMI readings across the developed world.

But part of the reason why gold prices have been able to rebound in recent days has been the prospect that the Federal Reserve may need to accelerate its easing efforts as the US economy looks weaker and weaker. The past week’s data was incredibly discouraging: a 10-year low in US ISM Manufacturing; three-year lows in US ISM Services, CEO & CFO confidence; and a six-month low in US retail sales.

With uncertainty on the rise once again, the environment for precious metals is starting to become more appealing. In turn, as volatility rises, one of the two scenarios examined in the last gold price forecast may no longer be valid. 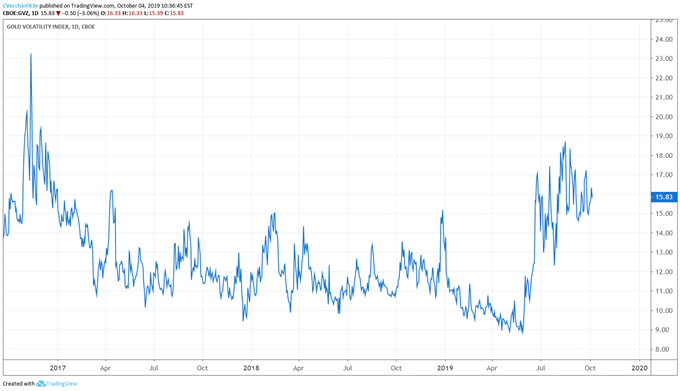 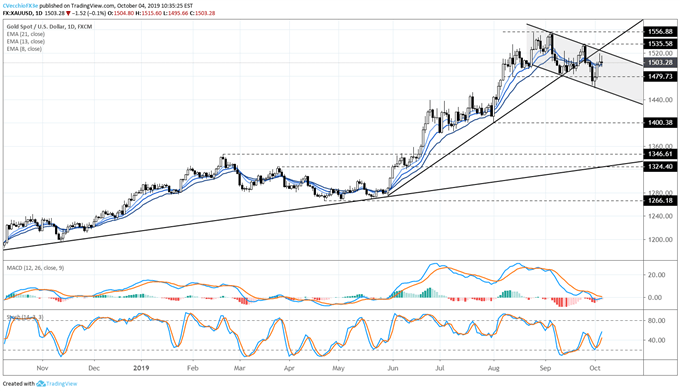 In our last gold price technical forecast updated, it was noted that “If gold prices are trading in a descending channel, then support may not be that far away. Measured from the September swing highs, the descending channel suggests support may around current prices, down to 1460 through the end of the week. If the descending channel support is respected, it may not be wise to take on such an aggressively bearish view: this could be a bull flag taking shape. If a bull flag is forming in gold prices, then more gains may be on the horizon through the end of 2019.”

Gold prices bottomed out this week at 1458.97 and returned above the prospective neckline of the short-term head and shoulders pattern at 1479.73. As a result, it appears that the alternative scenario’s topping effort is not a valid perspective.

Gold prices are back above the daily 8-, 13-, and 21-EMA envelope, which is neither in bullish nor bearish sequential order. Daily MACD is holding right at its signal line, while Slow Stochastics have trended higher into bullish territory. Accordingly, the bull flag perspective has become the focal point.

If the bull flag in gold prices is legitimate, a break above the late-September swing high at 1538.58 would need to be achieved. In doing so, gold prices would also retake the uptrend from the May and August 2019 lows. The 100% extension of the move from the May low, the September high, and the October low calls for a target price of 1726.31. 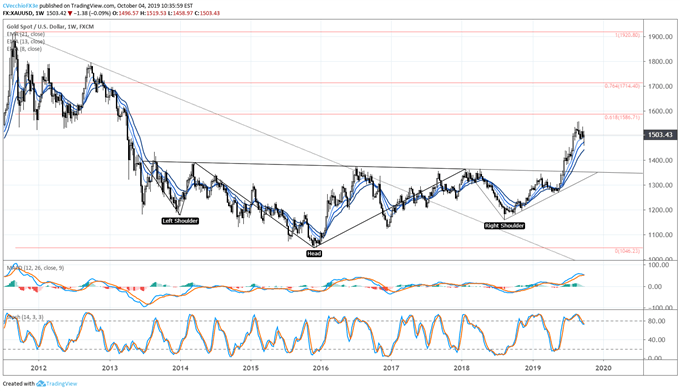 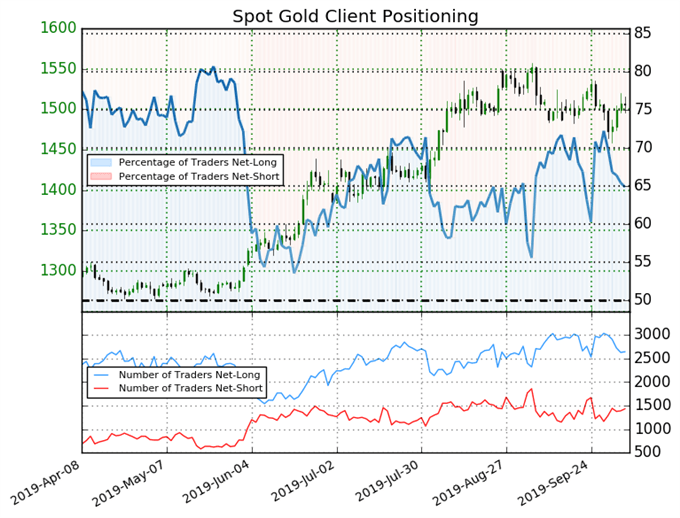