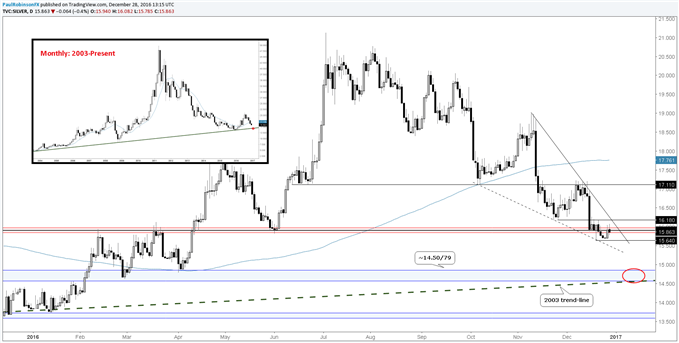 To receive Paul’s analysis directly via email, sign up here.

Over a week ago, when we looked at silver prices we said they were at risk of falling into an air pocket between the ~16/15.80 and 14.79/50 zones. On that Tuesday, though, silver fell as low at 15.64 before reversing to close back above 16, negating a strong bearish break. It was only a one-off bullish reversal event as silver has since struggled to gain any traction.

The longer silver struggles around the15.80/16 area, the more likely it is to find itself carrying lower and potentially much lower in short order. One of the themes we are focusing on as 2017 quickly nears, is for the trends which have held up into year-end to gain momentum again in early January. Higher US dollar, lower precious metals, and higher stocks. We’re at a time of the year/month where we shouldn’t expect much out of the markets, but once the calendar flips to January that sentiment changes with full market participation returning.

Below 15.64, silver may find some support on the bottom-side trend-line running lower from the October low, but really good support doesn’t arrive until 14.79/50, a zone running back to December 2015. Additionally, and more importantly, there lies a long-term trend-line closer to 14.50 rising up from a low in 2003 beneath the 2008 and 2015 lows. Should we get to that point we may be inclined to turn from bear to bull quickly should price action warrant the switch in bias.

The top-side trend-line from the November peak is intersecting with the bottom-side October trend-line, forming a descending wedge. The resulting break could be upward, but for now trend strength and lack of buying around a key area of support lends toward seeing more losses, instead.

Join Paul for webinars Wed-Fri (10 GMT time). For details regarding these and other live events please see our Webinar Calendar.