We’ll start with a snippet from Wednesday’s post: “With little happening, the triangle we pointed out the other day continues to develop. The contraction in price action is pointing towards a move to unfold soon. We will need to wait for the break before running with either side of the tape.”

Yesterday’s session passed with silver continuing to work its way towards a breakout following another rejection up near 18. It’s a critical area of resistance in the form of peaks created in May 2015/16 and the underside of the trend-line running up from January. This confluence has thus far proved formidable.

We are patiently awaiting the break, and given the proximity to the apex of the triangle, we shouldn't have to wait much longer. To reiterate from the other day; a topside breakout will be a more difficult proposition due to it going against the trend in place since summer and resistance up to just over 18, while a break to the downside will quickly bring into play 17.11, and below that support level there isn’t anything significant until the 16 line. 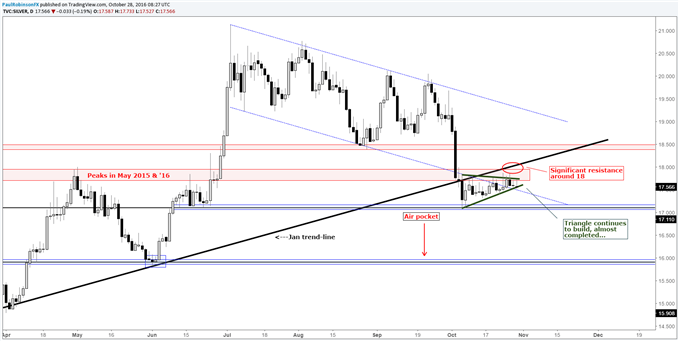 Taking a look at gold: It’s managed to work off oversold conditions in the form of a rising channel/bear-flag configuration. A break of the underside trend-line will quickly bring into focus support around the ‘Brexit’ day low near 1250, and on a break below 1241 there is an air pocket down to 1200. A break higher, like silver, will likely find more opposition and initially puts gold up against resistance around 1285, where a lower-side trend-line exists, one belonging to what we had once viewed as part of potential bull-flag from July to September. 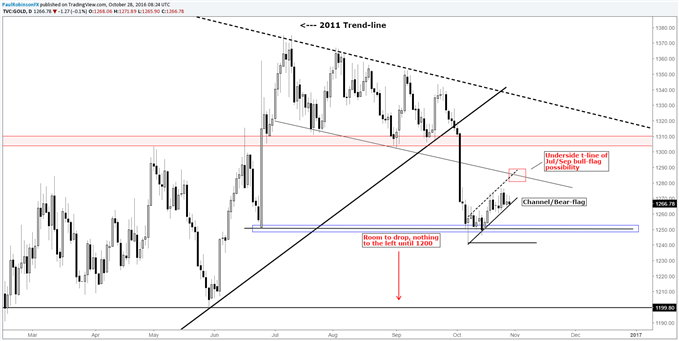 High impact data alert: Later today at 12:30 GMT, U.S. 3Q GDP will be reported. Analysts are expecting an annualized growth rate of 2.5%, and Personal Consumption is anticipated to come in at 2.6% YoY. No predictions on this end as we take our usual reactionary stance. A large deviation from the consensus will likely be a catalyst for outsized moves in markets, and a potential reason for silver to finally make a break for it.