In yesterday’s commentary, we were taking note of the ascending wedge taking shape at the top-end of the range developing since early July. Silver not only undercut the lower trend-line of this formation, but also cleared below the lower parallel of the rising channel which has kept the metal pointed upward for the past couple of weeks; an interesting development.

This not only gave the shorts something to sink their teeth into, but provided warning for longs that a decline was unfolding.

From here we have support in the low 19.90s – a bounce could develop from there, but at this time it is not expected to hold. The thinking on this end is that silver will sink, at the least, back to the bottom of the developing range around 19.20.

We have discussed this on numerous occasions, and we will touch on it again, briefly. The record number of speculative longs in the futures market continues to grow despite the lack of upward momentum. A decline in positioning coupled with an extended period of consolidation or declining price action (measured in weeks) should shake out a good number of longs, which would help reload the catapult for a potential move higher. But until this happens, it is difficult to see any further gains in the short-run as sustainable. This ultimately skews risk to the down-side.

Even before the last jet higher from under 16 to over 21, a healthy decline in both silver and market positioning were experienced. Prior to that move, silver leveled out with a modestly bearish tilt, but positioning acted similarly. Positioning did not rise while price went nowhere as it is now. 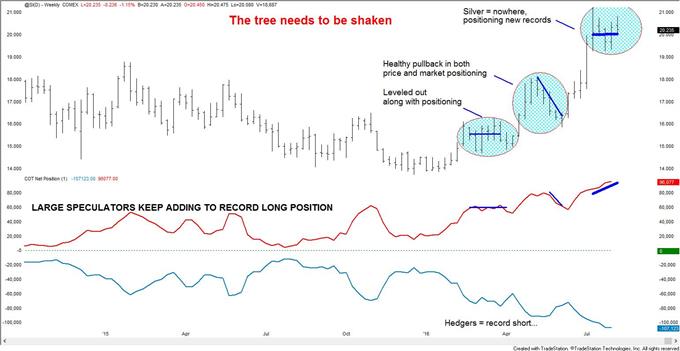 For now, we will continue to focus on the short-term developments while silver works on providing better longer-term clarity.

Take your trading to another level; start by reviewing our guide, “Traits of Successful Traders”.

He can be emailed at instructor@dailyfx.com with any questions or comments.