The seeming probability of renewed sanctions on Iran by US President Trump increased on Monday when Israeli Prime Minister Benjamin Netanyahu declared in a public presentation this his evidence proved Iran had engaged in more than a decade of nuclear progress.

Netanyahu Goes On the Offensive

Iranian sanctions would be coming at a bad time for the already tight physical Brent crude market that has traded at aggressive backwardation with the IEA already saying supply shocks are more likely to disrupt the markets than supply floods drowning the market. The main argument for the IEA being concerned was the sharp drop in production from some producers like Venezuela. Taking Iran offline would only heighten those concerns.

Recent data shows that even with current market tightening, crude shipments from Iran rose in April to their highest level since sanctions eased in January 2016. Obviously, taking that supply out of the market, regardless of whether sanctions are warranted would equate to a massive supply shock.

The broader story appears to be displayed by the crude curve, which has shifted aggressively higher and seems to argue that broad bearish bets are early at best, and possibly flat at wrong in the current environment. The market has aggressively shifted from Contango where the backdated contract trades at a premium to the front-month in 2017 to backwardation, where the front-month contract trades at a premium to the later-dated futures contract.

Backwardation is seen as a proxy for pent-up demand as the carrying costs, insurance, etc. should place a premium on holding a commodity that has to be stored over time unless there is a supply shortage.

Despite the Bullish backdrop, traders are also pricing in the most volatility for Brent, the global benchmark toward last week's 7-month high.

Like much of Wall Street, Big Oil is enjoying a stellar reporting season. What’s unique about oil is that their source of revenue is the source of pain for others as the price increases QoQ & YoY. In other words, while Big Oil seems to be benefiting now, OPEC may have the last laugh as higher Brent prices are supporting their fiscal agendas.

Brent crude oil has large support at $71/bbl, a level that aligns with a confluence of technical price floors. While pricing in of volatility is high, the backdrop does seem to favor the path of least resistance as pointing higher.

A strong proxy for short-term Oil strength has been the 9-day midpoint, called the Tenkan-sen on Ichimoku. Currently, with Brent, the Tenkan-Sen sits near $74/bbl and the price has traded above the Tenkan-sen since the April 10 breakout.

Short-term momentum traders would do well not to fight a bullish trend where the price trades north of the 9-day midpoint and can place a trailing stop via the 26-day midpoint, also called the conversion line on Ichimoku.

Not familiar with Ichimoku? You’re not alone and in luck. I created a free guide for you here 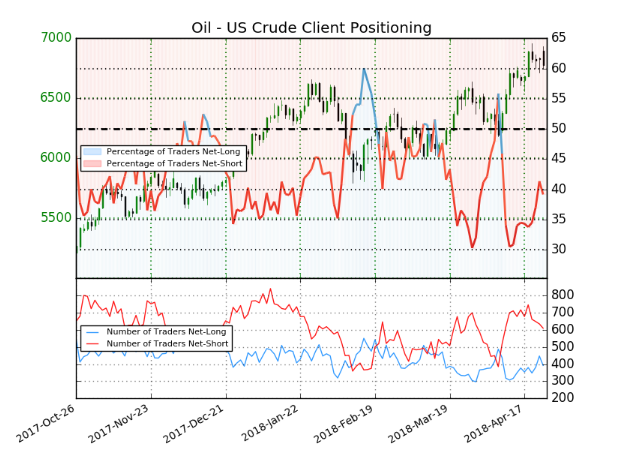 We typically take a contrarian view to crowd sentiment, and the fact traders are net-short suggests Oil - US Crude prices may continue to rise. Positioning is less net-short than yesterday but more net-short from last week. The combination of current sentiment and recent changes gives us a further mixed Oil - US Crude trading bias (emphasis mine.)