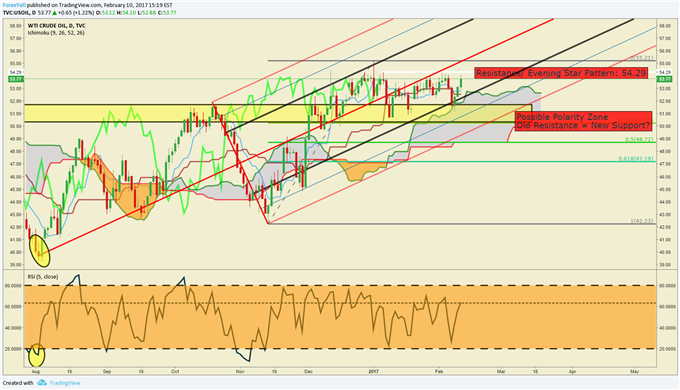 Strong OPEC compliance has led to a rally in the Crude Oil market with the group’s “secondary source,” showing a nearly 92% compliance rate from the cuts agreed upon production cuts that OPEC agreed to in late 2016. Despite the encouraging data regarding reduced supply, the Baker Hughes Rig Count rose by 8 for the fourth straight weekly gain to a total of 591 active rigs in the US.

There has been a credible view passed around that OPEC’s reduction in supply is being countered by the Shale Drillers in North America extending production as Oil remains comfortably above the $50/bbl level. While we have two competing fundamental developments with a reduction in OPEC production and an increase in US Shale Production, we have stability on the charts that could favor further upside.

The chart shows a polarity zone that once acted as resistance and now appears as price support. Given the historical developments when OPEC has cut production, which led to a ~565% increase from the 1999 cut and a 156% rally from the late 2008 production cut per Bloomberg, there is a reason to remain very optimistic as the price remains above the Ichimoku Cloud and the Polarity zone.

The Bulls would likely lose their confidence on a weekly close below the Daily Ichimoku Cloud that aligns with the 50% retracement of the November-January rally ($42.23-$55.21/bbl). A move above the $54.29/31 recent lower-high would encourage the view that wee could soon see Oil break higher. Another encouraging sign for Crude Bulls is that WTI 2nd-month implied volatility remains at lowest sinceOctober 2014.

From a positive correlation standpoint, USD/CAD remains inversely correlated with USOIL (CAD positively correlated to USOil over 20-days at +0.476) that would show that a breakdown in USD/CAD may also align with a break higher in USOIL.