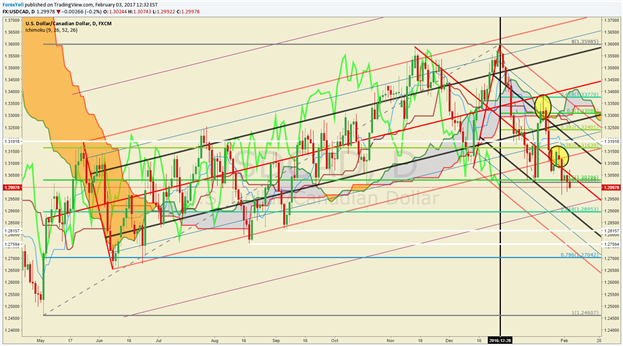 The Canadian Dollar has taken cues from its commodity bloc brethren by strengthening rather aggressively against the USD in 2017. We have seen a near 4% strengthening despite jawboning efforts from BoC governor as there is a world of uncertainty ahead for the Canadian Economy as NAFTA gets renegotiated and Energy Market upside remains suspect.

Traders may be quick to jump on the USD/CAD bearish train, but I would offer a few words of warning based on the structure of the move in USD/CAD since the rebound off the H1 2016 downtrend began in May.

First, USD/CAD has not been an ideal breakout-currency pair candidate. In other words, USD/CAD has traded best off deep retracement and tends to begin those retracements shortly after breaking a big chart level. 1.3000 on the chart is one of the levels that appears difficult to get short below because it is happening on an extension as evidenced by six straight weeks of new week-on-week lows in DXY.

As you can see from the attached chart, the channel drawn with the Andrew’s Pitchfork tool that has framed price action so well has shown aggressive turns with a meddling middle. Also, there has been a lot of chop between pivots, which makes breakout trading increasingly difficult.

Friday’s low of 1.2992 could still have a hundred pips of downside as many traders are keeping an eye on the 61.8% retracement at 1.28953 of the May-December range. You will notice that we have broken below support of the Pitchfork drawn off the basing price action last summer, which does put a preference on the downside absent a break above 1.3315/75.

However, those wishing to go short should look for a pull-back as the risk: reward will be more favorable, and entering on a retracement would allow you to trade in an appropriate manner to how the market has been trading. Given how the Central Bank wants a weaker CAD, a retracement may come soon and provide patient traders with the opportunity they’ve been wanting.

What Did The Analysts Learn After Trading 2016? Click Here To Find Out