Tuesday saw the price of WTI Crude Oil turnaround toward August highs on positive news for the industry. Iran is said to be sending positive signals that they may support a joint action by OPEC by limiting production so that demand and supply can even out. In addition to the positive fundamental news, all eyes are on Janet Yellen’s Friday speech that may help investors understand what lays ahead for the US Dollar into year-end. The US Dollar is inversely correlated to the price of US Oil so that a weakening US Dollar would likely benefit the price of WTI Crude Oil even further.

The chart above has consistently provided a helpful framing price action in WTI Crude Oil. After failing at the top channel in June, the price quickly dropped down to a pre-identified zone provided by the median line and the Fibonacci Retracement levels in focus between $41.85-$35.22/bbl. Given the move in August, which last week registered a Bull Market, the price support that is in focus now is ~$41.27/bbl.

As you can see, the price has moved right back up to formidable resistance that is provided by the Channel Top and the price is now resting at the top of the Ichimoku Cloud. A break above this Andrew’s Pitchfork resistance (Red) could provide real excitement as it would be the first time since summer of 2014 that we’ve seen what looks to be a sustainable bullish break for Crude Oil that could keep the price comfortably above the $50/bbl level for a while.

The price of US Oil does not seem to be slowing down as it heads toward trend-defining resistance near $49/bbl. Positive signs out of OPEC that may cap production as US production continues to lag may help support prices at higher levels. The potential for potential further US Dollar weakness would likely compound the effects of Iran potentially supporting OPEC action to help the price of Oil surmount and remain above $50/bbl. 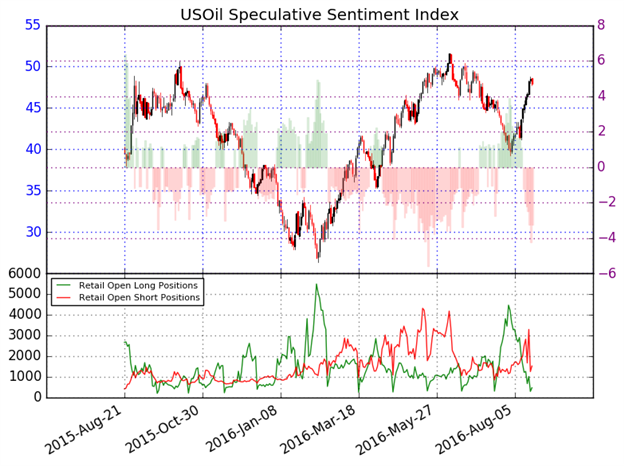 We use our SSI as a contrarian indicator to price action, and the fact that the majority of traders are short gives signal that the USOil may continue higher. The trading crowd has grown further net-short from yesterday and last week. The combination of current sentiment and recent changes gives a further bullish trading bias.