Thursday saw the price of WTI Crude Oil push ever higher on the back of a weak-dollar after Wednesday’s FOMC Minutes. Oil likely got an extra boost thanks to EIA numbers showed a ~3.5Mln barrel surprisefor Crude Oil Bulls. Thursday’s gains added to Crudes longest days of consistent gains in a year.

In the last note, we shared two possible headwinds to Oil’s rise are Saudi’s Oil Production and the US Dollar. While production increases will remain a worry, it does appear the US Dollar is pushing into a cycle of weakness as Thursday saw the lowest price of the greenback since the announcement of the Brexit.

The chart above has done a fine job of framing price action in WTI Crude Oil. After failing at the topchannel in June, the price quickly dropped down to a pre-identified zone provided by the median line and the Fibonacci Retracement levels in focus between $41.85-$35.22/bbl.

As you can see now, we’ve bounced right back up to formidable resistance that is provided by the Channel Top and the Ichimoku Cloud. A break above this channel could provide real-excitement as it would be the first time since summer of 2014 that we’ve been seen what looks to be a sustainable bullish break for Crude Oil that could keep up comfortably above the $50/bbl level for a while.

Before resistance breaks thought, given the ~17 Months within the price channel (aside from the January/February breakdown,) it’s safer to favor price remaining as opposed to breaking out given the low-volatility environment we find ourselves.

For now, the main headwinds to further price appreciation look to be a stronger US Dollar or increased Saudi production to keep the price of WTI Crude Oil under pressure.

Key support that would deflate the confidence of the 22%+ August trend would be a break below the higher-low of $41.27/bbl from August 11. A breakdown below there could be the first confident sign that price will continue to wallow lower in the falling channel drawn on the chart.

However, should the weaker US Dollar persist or a Production Freeze come to fruition, a breakout should not be takenlightly. Last note, we discussed that Hedge funds had taken a Bullish stance on WTI per futures positioning according to the CFTC. The shift to long positions by institutional money managers increased to their highest amount since January right before the last strong move higher from the high-$20/bbl zone to the low $50/bbl. Chances are they will be adding to this position on the breakout, which could lengthen the run.

The recent price action in Crude Oil has been impressive. The 22%+ rise in the price of Oil from the August low of $39.17/bbl has re-encouraged commodity Bulls that we could be leaving behind the discouraging market of the last two years. Another encouraging sign was the Inventory Data released Wednesday by the IEA.

Given the recent run up in Oil and breakdown in the US Dollar, if we’re able to break the formidable resistance of $49.25/bbl, we could be working on a potential retest and break of the June high of $51.64/bbl into new YTD highs. 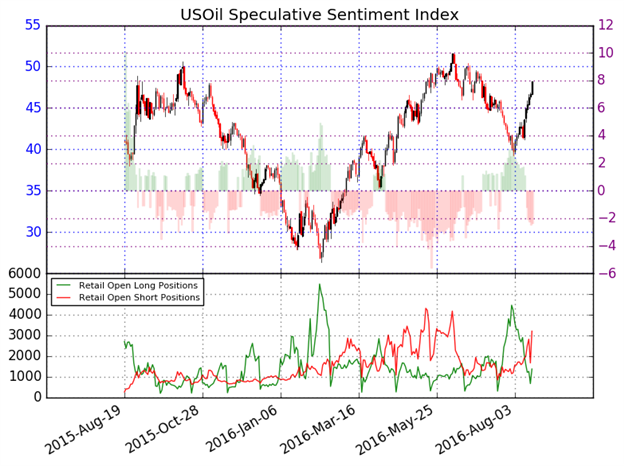 In addition to the technical focus, we should keep an eye on retail sentiment. The upsideis beginning to align with our Speculative Sentiment Index or SSIfor now.

We use our SSI as a contrarian indicator to price action, and the fact that the majority of traders are short gives signal that the USOil may continue higher. The trading crowd has grown less net-short from yesterday but unchanged since last week. The combination of current sentiment and recent changes gives a further mixed trading bias.