The Japanese Yen has been fading against the US Dollar since mid-August but it’s too early to call time on the former’s rally.

From a technical standpoint USDJPY now flirts with resistance at 106.95 which hovers just a few points above the market, well within Dollar bulls’ range. That point is interesting because it represents the 76.4% retracement of the rise from the lows of March 2018 to the peaks of October that same year. Neither of those has been passed since, though the pair did get down to lows not seen since March 2018 just this month. However, it bounced above that month’s lowest point which was 104.52. 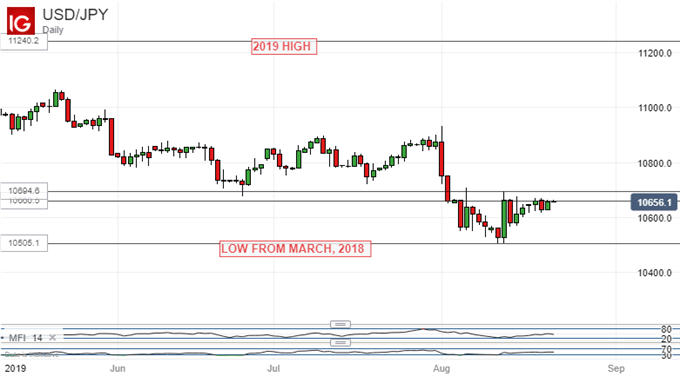 If the Dollar can regain that retracement level and build a base around or above it on a daily and monthly closing basis, then the bulls can hope for further gains. The sharp falls seen since late July and early August will probably have to be regained far more gradually and doggedly than they were conceded, but a solid rise above 106.95 might well show that the market at least retains the will to try.

However, if the current rally fizzles and retreats below the previous significant daily-closing high of 106.61, made on August 13 then that resolve will be in doubt and the lows of March 2018 will be back in the cards.

Of course, this week’s conclave of big, global central banking names at Jackson Hole under the auspices of the Kansas City Federal Reserve is all-too likely to set direction for markets well beyond USDJPY. The current relatively relaxed position of many risk sensitive assets may simply be a function of the wait for this rather than any inherent sign of strength.

Many Yen-cross daily charts certainly look rather similar now with one partial exception possibly NZDJPY. The Kiwi has been more obviously biased lower than most of its rivals ever since the Reserve Bank of New Zealand opted to shock markets earlier this month with a heavy, half-percentage point interest rate cut.

This forthright action has naturally weighed on the currency but even it has seem some hiatus in its slide against the Japanese Yen. That has in turn seen the top of a clear downtrend channel from August 1 challenged, but not yet conclusively broken. It is of course only part of the overall downtrend from early March, however, and a break might not be terribly significant for more than the short term.

In any case, overall direction is likely to come from global market reaction to the speakers at Jackson Hole. That event kicks off on Thursday.