USD/JPY Rate Forecast: Battle Of The Weakest At 2018 Open

The spot price of the Dollar Index fell 9% over 2017 and in so doing, allowed a surprising amount of JPY strength that many did not anticipate with the persistently strong risk sentiment as evidenced by the record highs in equities.

US Dollar Falls toward Weakest Level of 2017

While the USD/JPY rate is a long way away from the 2017 low at 108, traders are likely scratching their head as to why the rate has not risen. Some blame the potentially increasingly hawkish (relatively speaking) Bank of Japan while others see the Fed’s hawkishness (absolutely speaking) as fully priced into the market. Either way, traders should note that the JPY has weakened aggressively against other currencies, most notably EUR.

On the price chart with the Ichimoku Cloud technical study applied, traders can see that price looks to be testing support. The cloud base is near 112.30, but looking to the future Kumo (cloud), traders can see little conviction one way or another as the cloud has thinned out.

Unlock our Q4 forecast to learn what will drive trends for the Japanese Yen and the US Dollar by year-end!

The last three completed trading years have provided dismal moves in USD/JPY of 0.8%, -2.85%, & -3.65% respectively. A key move worth watching would be a jump in implied volatility and a breakout above resistance. However, absent that development, traders should watch for a further slow melting of the price below current price support of 112. 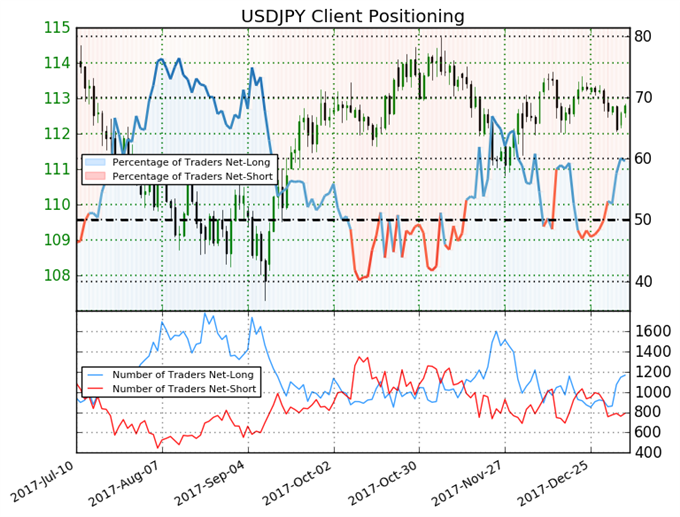 The sharp rise in long retail positions, coupled with the drop in short-positions provides a contrarian bias to favor further losses.