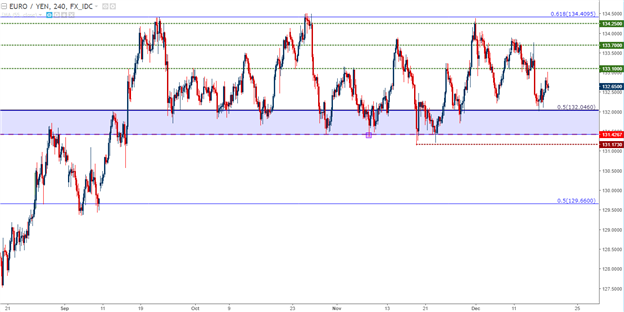 As we stare down the end of 2017, there are a number of exciting themes and scenarios that we can entertain for next year. Will the ECB finally announce an exit from their stimulus program? Will the Bank of England be forced into a more-hawkish stance, as driven by rising inflation as the bank looks to further tighten policy? And in the U.S., there are a whole plethora of questions: What will a Jerome Powell-led Federal Reserve look like? Will the bank be just as passive as they were under his predecessor, Chair Janet Yellen? And if they aren’t, what will happen to U.S. stock prices, will the break-neck bullish run of the past nine years be able to continue, even without the unmovable support from the Federal Reserve?

These are all highly pertinent questions. But they are also questions that we likely won’t have any clarity around until we turn the page into 2018. Until then – we have to work with the setups that charts give us, and for me, that means look for ranges as we move towards year-end in the effort of risk management. Also of high consideration – liquidity is usually lackluster during this time of year. And while this could potential lead to sharp movements if there are significant drivers, it can also lead to quiet, choppy price action. Trading momentum or trends during this period could be especially challenging and, in response, I’ll generally tighten up entry logic for range-bound markets, trying to become a bit pickier for which areas I’ll take on exposure for. Below are two separate support plays that I’m looking at as we near the end of 2017.

This setup looks to play the prevailing range in EUR/JPY, as we discussed in our previous technical article on the pair entitled, EUR/JPY Technical Analysis: Still Ranging. A closed wick through support on the daily chart opens the door to bullish setups, and the support zone that I’m following runs from 132.05, or the 50% retracement of the 2008-2012 major move, down to 131.43, which was a swing-high in early-August. Stops can be set below the November swing-low at 131.17, with targets directed to 133.10, 133.70 and then 134.25.

Also of interest is the top-side of GBP/USD, which we looked at in the earlier published article entitled, The Sliding Scales of Support. We looked at a support play off of the near-term Fibonacci level at 1.3320 earlier in December. That level has continued to help show support, but as each recurrent test has slipped a bit deeper, it would appear that a larger sell-off may be on the horizon. Below that area of support is another zone of interest, and this runs from 1.3111 up to 1.3216. A closed wick on the daily chart interacting within that zone of support opens the door for topside plays, with stops directed below the Q4 swing low at 1.3026. Targets can be directed to 1.3320 (break-even stop move), 1.3400 and then 1.3477.